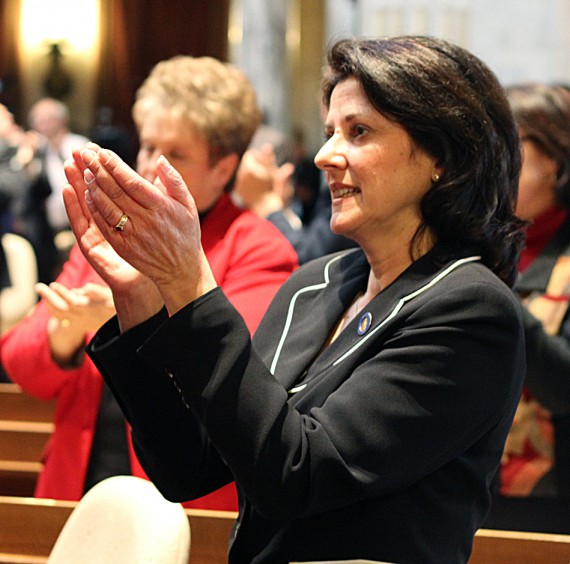 The U.S. Senate race in Wisconsin is heating up, with the candidacy of State Sen. Leah Vukmir, R-5th district.

In her campaign announcement video, titled “The Wisconsin Way,” Vukmir highlighted her background and time in the state Legislature. At an event in Wauwatosa, she pointed to her many years of involvement in the conservative movement in southeastern Wisconsin. The central argument Vukmir will pitch to Republicans in the primary is that she’s a proven conservative who Wisconsinites know. It’s a very powerful case.

When it comes to selecting a Republican nominee in a primary, I always look for a record. The election for U.S. Senate is a critical race for Republicans. If Sen. Tammy Baldwin is defeated next November, the GOP will control both of Wisconsin’s seats.

I want a proven conservative to win that election. Leah Vukmir has a spectacular record of supporting conservative reforms. She has been a phenomenal senator at the state level and I expect the same if she is elected to serve as senator at the federal level.

Vukmir is an early favorite in the Republican primary for many reasons. When Walker left the Assembly in 2002 and became the Milwaukee county executive in a special election, Vukmir ran to replace him. She won the election and was elected to the upper house in 2010. In the legislature, she has been one of the main drivers of conservatism.

She stood by Walker during the political battles over Act 10. She has consistently voted for tax reductions to grow the Wisconsin economy. She has been a proponent of lifting the cap on Milwaukee parental choice for school vouchers. She has supported policies like right-to-work and voter ID. She is robustly pro-life. She has been fighting for law and order to protect the Wisconsin citizenry. Stances like these are why Vukmir has amassed over 100 endorsements in a short period of time.

Currently, it has been difficult for the Republicans in the U.S. Senate to pass their largest legislation. There’s a slim majority of two, and the repeal of Obamacare was halted by just three Republican senators. Had the majority been greater, the repealing and replacement of the health care law would’ve been successful. In times like these, it would be ideal to have someone like Leah Vukmir in the U.S. Senate.

Vukmir also benefits from the location of her district. The 5th district is located in conservative areas of the counties of Milwaukee and Waukesha. Republican voters in the right-leaning Milwaukee county suburbs know Vukmir well. While Milwaukee county has consistently been won by Democrats in recent years, it is often forgotten that the second-largest basket of Republican votes in Wisconsin elections comes out of it, simply due to its large population.

Waukesha county is the third largest and one of the most conservative counties in the Badger State. Part of the WOW counties, Walker won 72.5 percent of the votes cast there. According to the Milwaukee Journal Sentinel’s Craig Gilbert, Waukesha county “delivered more Republican votes per capita than any large or mid-sized county (population 50,000 or more) in the country.”

Having this kind of a base is imperative to winning any election in Wisconsin. It is a base that has handed Walker three victories in gubernatorial elections. Vukmir has represented this base for years. They know what she stands for and they will help mobilize her campaign against Baldwin.

Since the records of Vukmir and Walker are practically identical, she can also run on the work she has done with the governor. Those who vote for Walker will likely vote for Vukmir, giving her a big boost in the election. Baldwin, who has been weakened for her handling of problems occurring at the Veterans Administration Medical Center in Tomah, has nothing positive to run on.

In the upcoming Senate election, Republicans cannot take any risks. It is important to have a candidate with a record of promoting conservative policies. It is for these reasons that Leah Vukmir is the candidate best-prepared to defeat Baldwin in 2018.