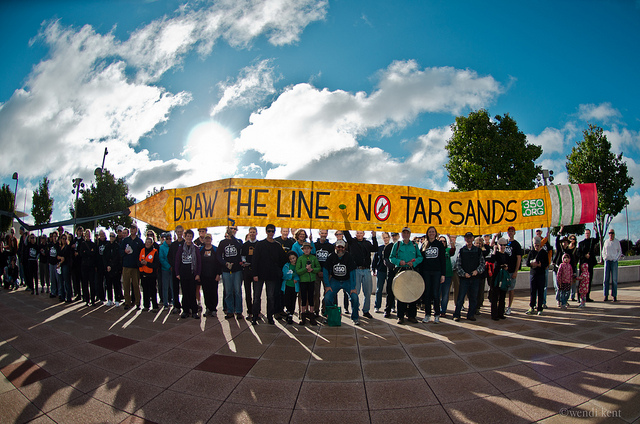 A struggle of biblical proportions is underway but has gone virtually unnoticed across Wisconsin. The fight is about self-determination. It is about local governments’ rights to protect their citizens from a $40 billion dollar international company trying to use Wisconsin as a high-risk highway for its tar sands crude.

Playing the part of Goliath is Canadian energy giant Enbridge. The name, according to the company website, comes from an amalgam of the words “energy” and “bridge.” This title is appropriate considering the company already uses Wisconsin as a bridge for its oil, with pipelines running from Superior to Illinois.

David comes in the form of the group of inspired local activists, including members from Madison 350, the Sierra Club and Wisconsin Safe Energy Alliance, as well as individual activists from across the state. The resistance movement has proven remarkably effective considering its size and resources compared to its opponent.

Dane county has become the epicenter for this movement, which seems to be gaining traction statewide. Although the Department of Natural Resources approved Enbridge Line 61 in 2006, Enbridge is trying to expand the pipeline’s capacity to unprecedented levels, which would effectively dwarf Keystone. The enlarged 42-inch pipeline will carry a mixture of extremely destructive oil and chemical solvents including the carcinogen benzene, according to a New York Times opinion piece on Line 61. This increase will require more pumping stations around the state, including one in Dane County.

The arena of public policy in which the latest battle occurred was not the Pipeline and Hazardous Materials Safety Administration, the agency responsible for controlling the pipeline, nor was it the Department of Transportation, the agency responsible for controlling the pipe’s contents. The strategic point of opposition was Dane County’s five-member Zoning and Land Regulation Committee.

This committee is responsible for approving the final pumping station needed to complete the expansion. With the unique power to influence the outcome of whole project, this obscure branch of local government has the upper hand against the goliath oil company. April 14, the Dane County zoning committee voted unanimously to ascribe conditions to Enbridge’s permit for a new pumping station in the county.

The conditions of use force Enbridge to carry an additional $25 million in pollution insurance in order to proceed with its planned pipeline capacity expansion.

The expansion would triple Line 61’s capacity to 1.2 million barrels per day – 45 percent more than the Keystone XL would. The reason the opposition is so motivated to stop the enlargement is public and environmental safety. Enbridge has an abysmal track record, with the company’s own data showing more than 800 spills from 1999 to 2010.

The 2010 break of an Enbridge line near Marshall, Michigan vomited tar sands oil for 17 hours before the company shut down the line. The result was the contamination of 35 miles of the Kalamazoo River, making the leak the largest inland oil spill in the nation’s history. Carl Whiting, PhD from Madison 350 and WISE Alliance, said the 1,000 PSI of pressure of the expanded Line 61 would make a similar leak disastrous. “It isn’t likely to leak, in the sense that we think of a leak. At over a thousand pounds of pressure, it may well be a geyser,” Whiting said.

The Marshall spill spewed approximately 50,000 gallons of oil per hour. The expanded Line 61 would spill that much oil in approximately a minute and a half. Should Line 61 rupture, it would release enough oil to equal another Marshall in just 25 minutes, according to Whiting.

The decision from the county zoning committee was a big win for those concerned about Wisconsin shouldering this sort of risk. Line 61 passes by many of the state’s rivers, and a leak up north would endanger the Great Lakes. According to Enbridge, clean up for the Kalamazoo spill has cost $1.21 billion to date. A spill in the Great Lakes could be far more costly and dangerous. Mark Maki, president of Enbridge Energy Management, L.L.C., expressed less concern, saying in a November 2014 earnings call, “…we just don’t see a lot of value in insuring for another Marshall.”

By requiring Enbridge to carry special pollution insurance in Dane County, a precedent is being set which may allow local governments to demand more protection for their citizens. It seems as though other counties are receiving the message. So far six have called for the DNR to do a full environmental impact statement for the project, and hold hearings in affected counties, according to Elizabeth Ward, the conservation programs coordinator of the John Muir Chapter of the Sierra club.

The hope of the opposition movement is that enough counties will demand similar conditions for the project to raise real awareness of the threat this project poses and the potential costs involved.

The entire movement is from the ground up, not unlike an oil spill, so its continued success is dependent on community involvement. Fortunately, there is no shortage in opportunity: Tuesday, April 21 from 6 to 9 p.m. in University of Wisconsin’s Red Gym the Tar Sands Resistance Tour will be hosting an informative rally in an effort to engage students and raise support for local control.

Jacob Ahrens-Balwit ([email protected]) is a junior majoring in environmental studies and philosophy.