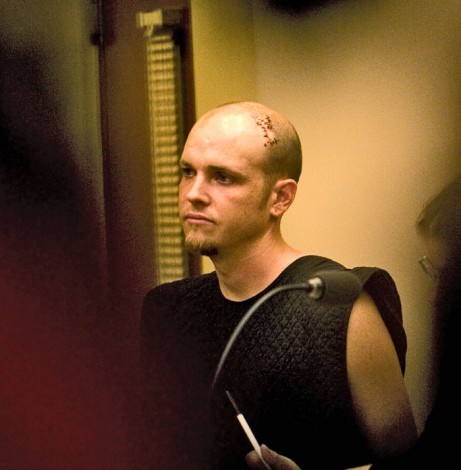 Accused of stabbing a man to death outside a Madison bar
Wednesday night, Justin Stout was granted  bail of $250,000 Friday at a hearing in the
Public Safety Building.

Stout, who appeared with a large gash on the side of his
head, was also ordered to not have any contact with the victim’s family or the third
man involved in the incident, Travis Knapp. Stout must also stay away from the
State Street area and not consume alcohol.

Assistant District Attorney Mike Verveer requested the large
bail, saying it was necessary to insure Stout shows up for his court dates. He
said in addition to the seriousness of the charges against him, Stout has not
lived in the area for very long and is a high risk to flee.

According to Federal Bureau of Investigation records, Stout
has a history of domestic violence, Verveer said, adding Stout was most
recently released from a Tennessee state prison in August 2007 after being
convicted of burglary.

Verveer added Stout has not been cooperative with
authorities, making it difficult to find out exactly how long Stout has been in
the jurisdiction or what his ties are to the community.

While Verveer said the final charges against Stout have not
been made, Stout is accused of stabbing Juan Bernal outside The Plaza Tavern
after an argument about the music playing on the jukebox inside the
establishment.

Bernal died from “multiple stab wounds to the chest dealt
with great force” that resulted in two puncture wounds to his heart, Verveer
said.

Knapp, who Verveer said is responsible for discarding the
knife that killed Bernal, was granted bail for $5,000 directly after Stout’s
hearing.

Knapp has not yet been charged for anything relating to the
incident, but he is currently being held for one count of felony bail jumping
after violating the terms of his bond by drinking alcohol. He was also arrested
for battery last February.

According to Verveer, Knapp blew a .13 in a breathalyzer at
the time of his arrest.

If he does make bail, Knapp, who appeared with evident
facial bruises, was ordered to avoid alcohol and to not have any direct contact
with Stout or any members of Bernal’s family.

Both men are scheduled to make their initial court
appearances early this week.