The two last met Dec. 11, 2020, with the Scarlet Knights edging out the Badgers in a tight battle 70-65. With a 2-9 mark all-time and an 0-6 record in their last six matches, the University of Wisconsin aims to add a fourth victory to their 2021-22 campaign Sunday afternoon.

Coach C. Vivian Stringer is the fifth-winningest coach in NCAA women’s basketball history and has been the anchor of 18 different Scarlet Knight squads that have reached the national tournament. As a 2009 Naismith Basketball Hall of Fame inductee with 50 years of sideline experience, Stringer certainly knows a thing or two about what it takes to win. Stringer’s 2020-21 group went 14-5, including 10 wins vs. inter-conference foes.

Through 18 games this season, Rutgers manages 56.6 points with a lowly 39.4% efficiency from the field and a 27.3% clip from downtown. The Scarlet Knights average 37.1 rebounds, total 15.9 points off giveaways and snatch 9.7 loose balls per bout.

Across the hardwood, UW averages 59.5 points per contest while shooting 40.3% from the field and 30.7% from behind the arc. With a -7.9 scoring margin, the Badgers average 10.5 points off turnovers and pull down 31.3 rebounds per game — tied for the eighth-lowest rebounding average in the nation. Despite some obvious shortcomings, the Badgers register 0.8 assists-per-turnover and only 14.8 giveaways per match.

Through 35.8 minutes per game, versatile junior Julie Pospíšilová averages 14.7 tallies, 3.9 rebounds, 3.4 assists and 1.5 steals each time out. The Czech Republic native is responsible for 198 total field goals as well — 68 more than any other Wisconsin player. Pospíšilová is an all-around player with the potential to take over a game.

In addition to her 13 points and 4.6 rebounds per outing, UW star Sydney Hilliard still remains at the apex in field-goal percentage among guards in the country with a stellar 55.91% clip from the floor. With 488 minutes logged so far — the seventh-highest total in the county — point guard Katie Nelson leads UW with 51 dimes and 24 steals. 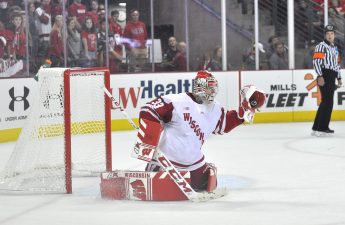 Forward Osh Brown, the active career leader in rebounds and double-doubles in NCAA Division I competition, averages nine points and 9.1 rebounds over 27.9 minutes per contest. In 18 total appearances, the six-foot-one-inch graduate student ranks 14th out of 146 qualified student athletes in total rebounds in the nation, so Brooke Schramek and Sara Stapleton will need to box out and avoid unnecessary fouls down low.

Accountable for a team-leading 46 assists and 29.3 minutes of action per game, sophomore guard Shug Dickson racks up nine points off 35.1% from 3-point range. Dickson is also a pest on the defensive side, averaging 1.5 steals per bout. Alongside Brown and Dickson, guard Lasha Petree adds 6.9 scores off 35.1% from the hardwood. The senior also leads the Scarlet Knights with 19 made three-pointers over 18 matches.

Though Moseley’s Badgers remain in the bottom of the conference against other Big Ten groups, Rutgers holds the bottom spot. The Scarlet Knights turn it over 19 times per contest, so if Wisconsin can jump passing lanes and grab a few loose balls, the Badgers could snap their three-game skid Sunday afternoon.