After dropping consecutive games against non-conference opponents, the Wisconsin Badgers (1-2) return to the Kohl Center to face the Chicago State Cougars (0-4) on Nov. 22.

Coached by Tiffany Sardin, a former University of Virginia student-athlete, the Cougars went 0-14 during the 2020-21 campaign. The team averaged a dismal 34.4% from the field per contest to go along with a -22.6-point scoring differential. With only 10 total players on Sardin’s squad a season ago, Chicago State accounted for 48.9 points, 8.6 dimes and 33.5 boards per bout. 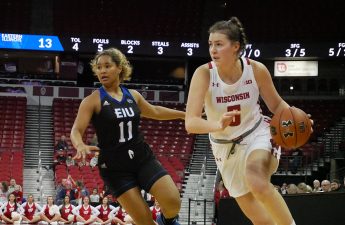 With seven departures, including leading scorer Nadia Thorman-McKey who averaged a team-high 33.4 minutes per game, a 41.2% clip from three and 13.8 points per contest, the Cougars look much different this year. Chicago State welcomes eight newcomers, including three freshmen, to rejuvenate a historically disappointing program.

As members of the Division I Western Athletic Conference, the green and white dropped 59 consecutive games over a two-year span, finally defeating Utah Valley in Feb. of 2018 to bring the historic drought to a close.

Fortunately for the Badgers, Chicago State continues to struggle throughout the early portion of the 2021-22 campaign. With a -28.5 scoring margin, 31.1% efficiency from the field and an average of 20.3 turnovers a game, Sardin’s new-look group is yet to overcome any challenge over the last four matches. Most recently, the Cougars lost to Loyola University-Chicago 59-71 on Nov. 20, following a 27-point loss at the hands of Western Illinois University on Nov.17.

For Wisconsin, guard Sydney Hilliard generates a team-leading 18 points per contest off 53.5% from the floor. Point guard Katie Nelson accounts for 16 of the 37 Badger assists over three battles, and forward Sara Stapleton averages 8.3 tallies off 50% from the field.

As the Badger faithful witnessed against both NJIT and Bradley, Wisconsin cannot afford to overlook another adversary outside the Big Ten. Shooting woes have plagued the Badgers and in order to conquer the Cougars, Moseley’s team will need to execute on more  three-point attempts and shots from the field. Anticipate a bounce-back performance by Julie Pospíšilová and Alex Luehring, as well as another stellar outing from offensive standout Sydney Hilliard.

Freshman Aaliyah Collins, a Glacier Peak High School graduate and a 2021 Washington First-Team All-State recipient, leads the Cougars in virtually every statistical category on the offensive end. The 5-foot-7-inch guard accounts for 11.3 points per game, shoots 42% from the field and has put up 21 more shot attempts than any other of her teammates thus far. As recipient of the Everett Herald’s 2021 Girls Basketball Player of the Year Award, Collins should yield most of UW’s attention on Monday night.

The 5-foot-4-inch Evanston native tallies 7.5 points per bout on 33.3% from behind-the-arc as Chicago State’s most lethal three-point threat. Anticipate extra pressure on the perimeter whenever Boothe commands the rock.

These will be key players to watch for as Wisconsin will look to get back on track after a disappointing start to the 2021-22 campaign.