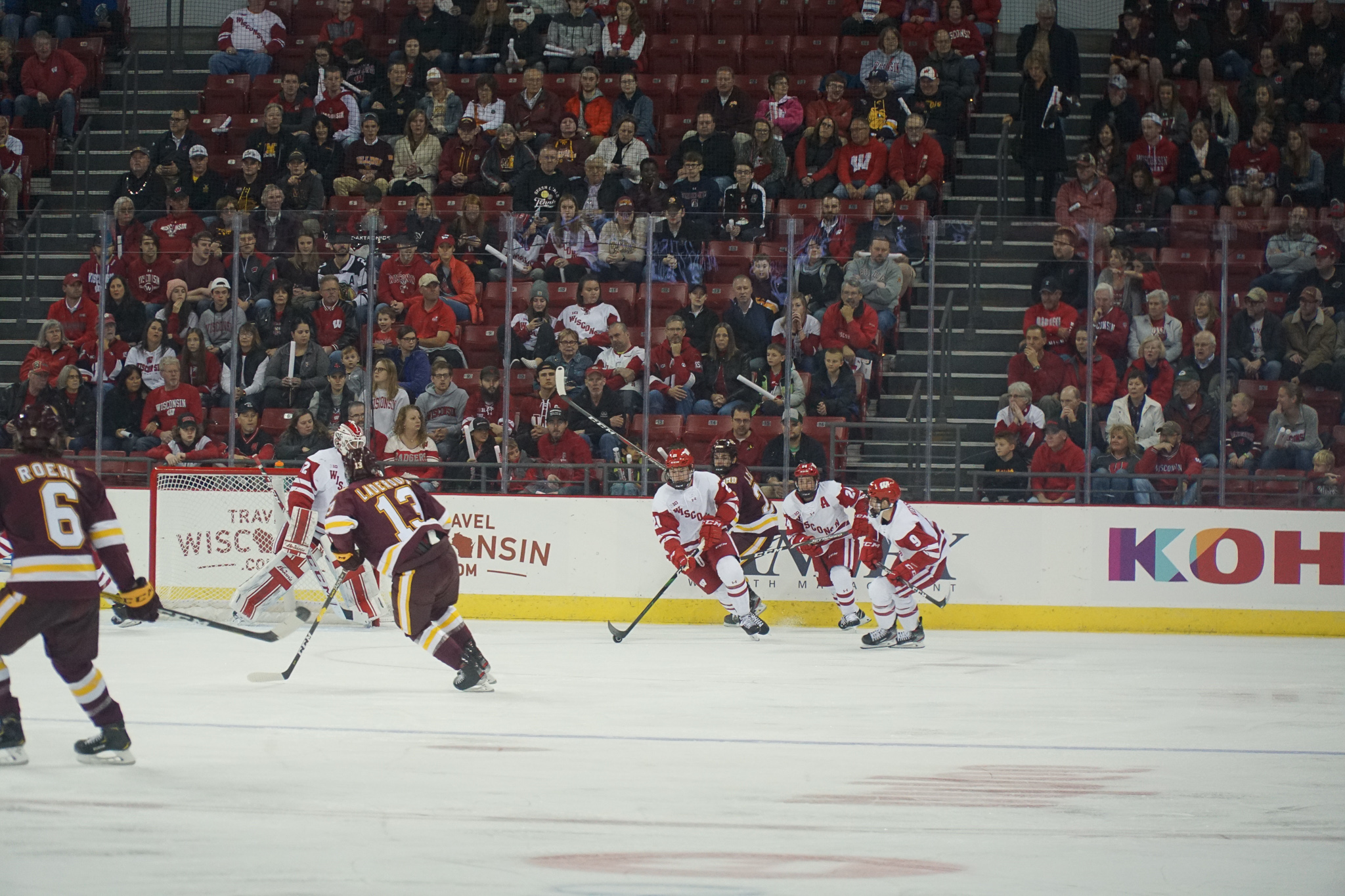 As the 2020-2021 Big Ten Hockey season comes to a close, the University of Wisconsin men’s hockey team (17-8-1, 15-6-1-1 Big Ten) looks to make a splash in the Big Ten tournament this season after dominating the field and claiming the top spot in the conference.

They are coming off of a dominant 7-0 win over the Ohio State Buckeyes on senior night at LaBahn Arena, and have won 11 of their last 14 games heading into the season finale against Michigan State.

For such a storied program whose alumni have played the most combined games in the National Hockey League since the 2004-2005 season lockout, the Badgers have not made the NCAA Tournament since 2014, the year the team captured the inaugural Big Ten hockey conference championship. This drought has left fans and coaches looking for answers, which have mostly been found this season.

The team has hit their offensive stride, leading the Big Ten Conference in total goals and goals per game. This is thanks to a balanced scoring attack led by Cole Caufield, Linus Weissbach and Dylan Holloway, who are all averaging over a point per game and have been nominated for the Hobey Baker Award. Along with these top offensive weapons, the Badgers have also been getting strong contributions from key role players like Ty Pelton-Byce and Roman Ahcan, who have put up 25 and 19 points respectively so far this season.

Defensively, the team is led by captain Ty Emberson and seniors Tyler Inamoto and Josh Ess. Emberson leads all defensemen on the team with nine points. Inamoto is one of the best shot blockers in the country and has a staggering 63 blocked shots so far this year — by far the most on the team. Ess has been able to contribute both offensively and defensively, scoring some big goals and posting a +9 rating while on the ice.

The goalie position, which was a question mark coming into the season, has been solidified by newcomers Robbie Beydoun and Cameron Rowe. Beydoun, a graduate transfer, has started 17 games, recording 2.75 goals against average and a .914 save percentage. Rowe has also been stellar in his 13 starts, putting up 1.77 goals against average and a .939 save percentage. This tandem has combined to keep opponents from outsourcing the Badgers offense.

Though Wisconsin has found great regular season success this year, the team will not be satisfied until they make it back to the NCAA Tournament with a shot at a national title, which would be their first since 2006. Sitting inside the top five of the national rankings, the team has a great opportunity to qualify for the 16-team bracket, but a Big Ten Conference championship would give them an automatic bid.

The 2021 Big Ten Men’s Ice Hockey Tournament will begin March 14 at Compton Family Ice Arena at Notre Dame, capped off by the championship game March 16. The Badgers will face either Notre Dame or Penn State in the semifinal round of the tournament, after the Badgers get their first round bye as the top-seeded team in the conference.