Wisconsin dropped to the second spot in the Big Ten standings after an eye-opening sweep from the No. 10 Penn State Nittany Lions.

The Badgers took the ice Friday night against their fifth Big Ten opponent, hoping to push their win streak to six games and make a statement in the college hockey world.

PSU and their high-flying offense, however, had different plans. The Lions jumped on the Badgers with two first period goals, silencing the Kohl Center. 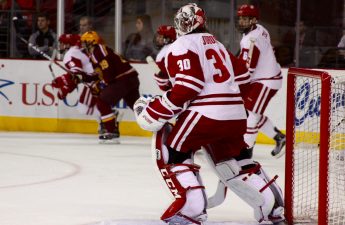 Wisconsin looked overmatched by the Big Ten powerhouse heading into the first intermission, but came out of the locker room with renewed energy. Wisconsin tied up the game with two goals midway through the second, including a power-play strike by sophomore forward and captain Luke Kunin.

The No. 10 Lions did not bat an eye at the Badger scores as they netted three unanswered goals, taking a 5-2 lead in the opening minutes of the third period.

Wisconsin would respond late in the final period with another power-play score, but it would be too little too late for the Badgers as PSU sealed the deal with their sixth score minutes later.

Men’s hockey: Revival of Wisconsin hockey is hereThe last time the University of Wisconsin men’s hockey team was at the top of the conference, Lebron James was Read…

The story continued Saturday night as the Lions got on the board first after PSU’s two-on-one break got past goaltender Matt Jurusik.

Wisconsin responded before the period ended when Matt Ustaski found the back of the net just as the Lions were coming back to full strength.

The Badgers looked poised to hang with the top-ranked Lions as the first period ended, but containing the PSU offense would prove to be more than Wisconsin could handle.

PSU cranked out two straight goals to start the second period and seemed to have every ounce of momentum on their side.

“Even when we got things going they didn’t get rattled and they were able to turn the momentum back their way whenever we did get any, so they were the best team in my opinion we’ve played this year,” head coach Tony Granato said following the Saturday defeat.

A repeat of the night before seemed to be playing out at the Kohl Center until captain Luke Kunin found the back of the net on a Wisconsin power play, providing a much-needed spark to the Badger offense.

Wisconsin continued to push the pace as the second period came to a close with PSU leading 3-2.

Any momentum the Badgers gained at the end of the second vanished as they stepped onto the ice for the final period.

PSU scored just three minutes into the period, deflating the Wisconsin crowd and improving their lead to two goals.

As the third period ensued, neither team could muster much of an advantage until PSU sealed the deal with their fifth and final goal.

“The whole series they played smarter; they played a better road game than we were able to handle,” Granato said postgame.

PSU’s elite offense proved too much for the Badgers to handle as the Lions found the back of the net 11 times on the weekend.

“We just gotta want it more I think, from the start of the series to the end they wanted it more than we did and I think that showed,” Kunin said following Saturday’s game. 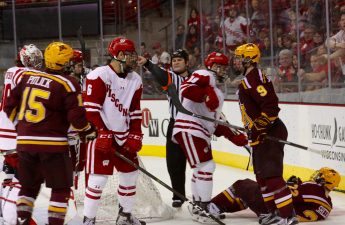 The Badgers fell to 8-4-0 in conference matchups after the two losses but, at the second spot in the Big Ten, still sit above the Lions.

“We get to play them again, we have another chance to turn the tables on them and be the better team because I think we can be, but there’s some areas in the next few weeks we’ll have to improve on,” Granato said.

Despite the two tough losses, one Badger continued to light it up on the ice. Junior forward Cameron Hughes continued his scoring streak with two assists on the weekend, extending his run to 10 games, the longest in school history.

A silver lining was tough to find in a defeating weekend for the Badgers, but they remain in the hunt for both a top spot in the conference and an NCAA tournament bid.

“I think we gotta just reset a little bit mentally,” Jurusik said. “We have to realize some weekends aren’t going to go our way.”

The Badgers have two weekends to regroup before they face the top-ranked Lions again, but have no time to dwell on the two losses as they face unranked Michigan and the No. 5 Minnesota Gophers in the next two weekends.