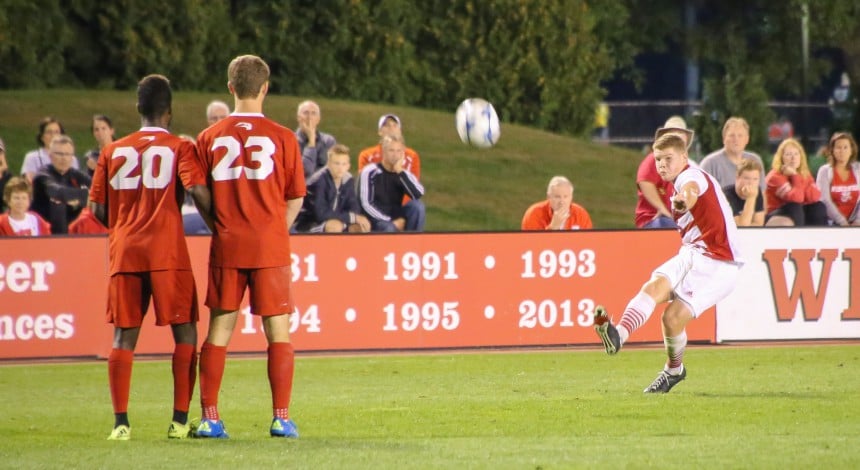 The University of Wisconsin men’s soccer team battled the No. 21 University of Michigan State Spartans to a 1-1 tie Sunday afternoon.

Both the Badgers (6-2-2, 3-1-1 Big Ten) and Spartans (8-2-1, 3-1-1 Big Ten) had been on three game winning streaks when they met in East Lansing this weekend. The two were also both playing to take solo ownership of second place in the Big Ten standings, with perennial powerhouse Maryland sitting in first place.

With two teams playing consistently dominant defense behind two goal keepers playing at high levels, the game was expected to be a defensive battle, and it lived up to the hype.

Without reigning NSCAA National Player of the Week sophomore defender Sam Brotherton, as he was the playing for the New Zealand national team, the Badgers had to look for other players to step up in his place. Senior Matej Radonic did just that in the 21st minute when he took an assist from Noah Leibold and scored his first goal of the season. The goal put Wisconsin up early in the game, but it was the last the Badgers could post in the game.

Brotherton will return next week and should be a big addition to a UW team already gathering tremendous depth.

The Badgers defense held until the 36th minute when Michigan State sophomore Dejuan Jones sent a shot past Wisconsin goalie Phillip Schilling off an assist from Michael Pimlott.

In the second half of the game, both teams struggled to get any good runs or shots on goal which resulted in the defensive battle that everyone expected to see. Badger duo Chris Mueller and Tom Barlow had chances at various points at the end but couldn’t find the back of the net. In the final few minutes, Michigan State had a chance of their own when Jones had a chance to score his second goal of the game but missed the net.

In the end, the stats matched what the final score stated about the game. Both teams matched or nearly matched each other in every category. Wisconsin had 8 shots with 3 on goal while the Spartans had 7 total with 3 on goal. On the defensive side, Badger keeper Schilling had two saves.

The Badgers play again Tuesday at home in Madison against in state rival UW-Green Bay at 7 p.m.