The 2016 World Cup of Hockey, a.k.a. the NHL’s response to the International Olympic Committee’s banning NHL players from the 2018 Winter Olympics, begins Sept. 17.

Some of the best players from around the world will take to the ice, clad in their respective country’s colors in attempt to win the first edition of the tournament since 2004.

This includes Team USA, a tough, bump and grind team that, while slower than most of the other squads, will be able to throw around the smaller skaters that comprise them. Luckily for Badgers fans, this team includes four former Wisconsin men’s hockey players, one of whom will serve as captain, another as an assistant captain and a third as part of the team’s leadership committee.

Two seasons at the University of Wisconsin culminated in a national title during the 2005-06 season for Joe Pavelski. Afterward, he joined the San Jose Sharks for the 2006-07 season, where he quickly established himself as a key player after seeing limited action as a rookie due to a leg injury.

The Plover, Wisconsin native has always been a balanced scorer who’s steadily improved with age. Pavelski spent his first few seasons progressing from a 40-point scorer to the mid-60s range. After the 2012 NHL lockout, however, a new Pavelski emerged that’s pushed on 80 points in the past three seasons.

Credit his mindset for that, which also makes Pavelski the perfect choice for captain — he has a high work rate, puts the team first and is always willing to do the dirty work.

While not the biggest player, his constant drive to do what’s best for the team often leads him to the front of the net. Look for the first-liner to frustrate goalies when he parks himself in front of the crease to setup a screen, and don’t be surprised if he scores on a redirection or putback. 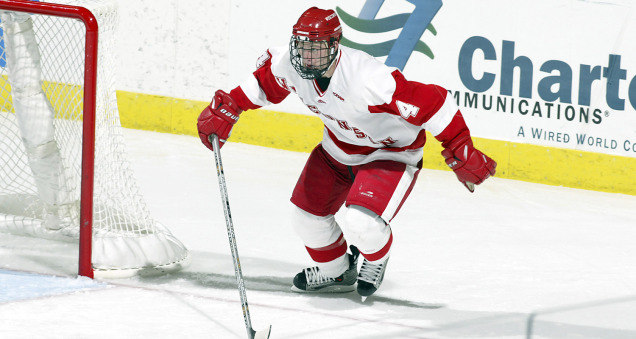 The Madison, Wisconsin native spent only the 2003-04 season at UW before jumping ship for the pros. His first seven seasons, spent with the Nashville Predators, proved unfruitful so when he had the chance, Ryan Suter joined the Minnesota Wild ahead of the 2012-13 season.

Since 2008-09, Suter has never dipped below 30 points thanks to his passing skills and hockey IQ. Last season, he recorded a career-high 51 points and established himself as one of the premier offensive defensemen in the NHL.

While not a standout in any specific area, Suter is an all-around above average player who can handle large chunks of ice-time. Over the years his play-reading skills have developed as a result, making him a reliable choice on the second or third line for Team USA.

Suter also draws from his international experience. He played in the 2010 and 2014 Winter Olympics and every level of the Internaional Ice Hockey Federation World Championship from 2002 to 2009.

Ryan McDonagh left UW after three seasons in 2010 to sign a professional contract with the New York Rangers and spent only half a season in the American Hockey League before being called up to the Blueshirts full-time. The St. Paul, Minnesota native has since made himself a staple of the Rangers as a hard-nosed defenseman who makes smart reads on plays.

His large frame often buys him time on the puck and helps him to force opponents off it. McDonagh is known for blocking shots and the occasional big hit, a pure shutdown defenseman, but he is no stranger to offensive play.

The current Rangers captain has averaged just under 37 points over the past three seasons by making efficient passes from the blue line to set up teammates. Though, when he needs to he can net the puck as well and tallied 31 goals in that same time.

McDonagh is the type of defenseman you want on your team and could be a first-pairing while also a focal point of one of Team USA’s powerplay units. He will be taking on a leadership role as a member of Team USA’s leadership committee after he was named to the position by John Tortarella, his former Rangers coach and Team USA’s coach.

Derek Stepan’s time at UW lasted for only two seasons from 2008-10, but he will long be remembered as one of the top forwards to leave the school.

After joining the New York Rangers alongside fellow Wisconsin teammate McDonagh, Stepan carved a career out of being an undersized, agile center. Despite that lack of size, the playmaking ability has not abandoned Stepan in the NHL.

The Hastings, Minnesota native has consistently ranked among the Rangers’ top scorers and has never dipped below 44 points in his career. Stepan is assist-heavy in that respect, but can pot an important goal when needed to — ask the Washington Capitals.

Stepan does have some noticeable limitations though. His size prevents him from posting in front of the goal for screens and he can be defensive liability at times when in his own end. But the good outweighs the bad, and Stepan could very well find himself on the second-line as well as a powerplay line.

While he won’t be under the microscope like Patrick Kane or Zach Parise, Stepan might just pop up at the right moment to steal the spotlight.