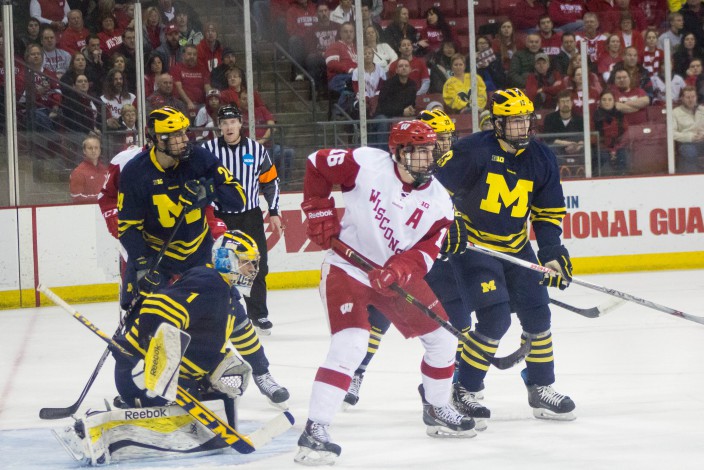 At long last, it’s finally over.

The Wisconsin men’s hockey team limped into the Big Ten tournament Thursday, and absorbed the final blow that put its season down for the count.

Michigan scored late in the first period of the quarterfinal at Joe Louis Arena in Detroit and then added two more quick tallies early in the second period to dispose of the Badgers (4-26-5), who ended the worst season in program history on an eight-game winless streak.

“As disappointing as it is to end the season, these young men, they earned the right to walk out of the rink with their heads held up high because they could have folded. They didn’t,” Wisconsin head coach Mike Eaves said. “They kept battling and we were there knocking, hoping for another goal late in the game.”

Wisconsin brought the deficit to just two goals a little less than halfway through the third period when Jedd Soleway stuffed home a rebound at the 9:14 mark to make it 3-1 in favor of the Wolverines.

The Badgers got a jolt of life back in them when Michigan (22-15-0) took back-to-back penalties that gave UW slightly more than a minute of a 5-on-3 power play opportunity.

“Team morale was definitely up with that,” senior captain Brad Navin said of what ended up being the Badgers’ lone goal. “We hadn’t scored a goal in a while. That was huge for [us].”

But on the ensuing two-man advantage, Wisconsin failed to record a single shot on goal, as the Wolverines killed off both penalties to shift the momentum back in their favor. Michigan killed off all six penalties during the game, including four in the third period, against a Badgers’ power play that has converted at just an 11 percent clip this season.

With the momentum back on its side, Michigan scored less than a minute after it got back to full strength, putting Wisconsin on the ropes. The highest scoring offense in the country tacked on a fifth goal with a little less than three minutes to go to seal Wisconsin’s fate.

“We just didn’t have that spark tonight,” Navin said. “But I thought our energy and our consistency was there. It was just our execution wasn’t.”

However, for the first 15 minutes of the game, Wisconsin stuck with the Wolverines as the two teams remained scoreless. Michigan held a slight advantage in shots on goal in the first period (9-5), but it was a tough bounce that put Wisconsin down for good.

While on the penalty kill, an initial shot from the right wing glanced off of UW defenseman Kevin Schulze’s skate and found its way to the stick of Michigan’s Zach Hyman, who continually haunted Wisconsin throughout the season. Hyman converted the rebound 14:45 into the first period for his first of two goals during the game, and tallied six goals and 13 total points against Wisconsin this season in five games.

The trio of Hyman, Justin Selman and Dylan Larkin combined for nine points Friday and had 33 points total against the Badgers this year.

“You try to limit what they can get done. But in the end they’ve got some things done against us tonight.”

However, after getting outshot in the first period, Wisconsin equaled the effort of Michigan with 12 shots on goal in the second stanza. But UW couldn’t find the back of the net as the Wolverines capitalized twice to take control of the game.

Badgers’ goaltender Joel Rumpel made 10 saves in the second period, but the bounces continued in the Wolverines favor resulting in their second goal. Andrew Sinelli’s shot deflected off of Ryan Wagner’s stick and Rumpel couldn’t get to the redirected puck as Michigan went up 2-0. About four and a half minutes later, Hyman struck again to make it 3-0.

The Wisconsin offense had scored the most goals in second periods this season, but Michigan’s Steve Racine made 23 saves on 24 Badger shots over the final two periods to keep them at bay.

UW ended up with a 29-28 advantage in shots on goal, just the fifth time this season it has had more shots than an opponent. But for the fifth time, Wisconsin still lost despite having more opportunities.

Rumpel (23 saves) finished his Badger career with his lowest save total since late November, and his fewest since he had 14 in a 4-1 loss to Northern Michigan.

Outside of Rumpel, Wisconsin graduates just five other players on this year’s team and has a contingent of 17 freshmen and sophomores returning next season.

Eaves hopes the wealth of learning opportunities, and losses, this year will help that young group push forward to a better campaign when next season rolls around.

“They will come back and they’ll have a whole year under their belts and they’ll understand quickly what we’re trying to get done from a firsthand standpoint,” Eaves said. “So this year it seemed as we started at A. Next year when we come back maybe we’ll be in G or H in the alphabet and continue forward as we build.”