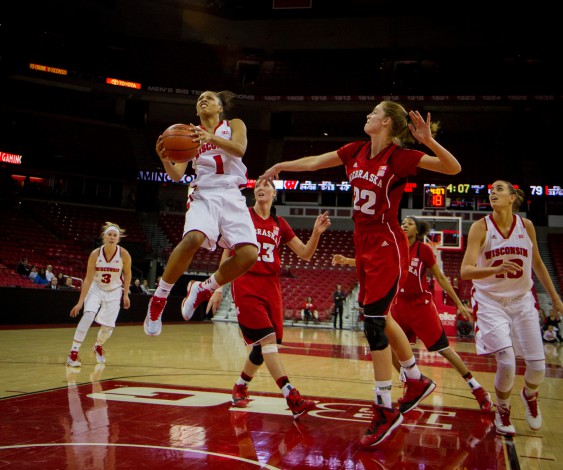 In its second consecutive loss to a ranked opponent, the Wisconsin women’s basketball team fell hard to Nebraska Thursday night at the Kohl Center 89-72.

Husker guard Tear’a Laudermill shot the Badgers out of the gym in the first half, and the Huskers never looked back.

It was the second game in a row Wisconsin had been lit up by one player. Last time out for UW, against Rutgers, Cynthia Hernandez came off the bench for the Scarlet Knights and went 5-6 from three-point range for 17 points.

Laudermill wasn’t nearly as efficient, but her three-point shooting in the first half downed the Badgers early. She had 18 of her 24 points in the half, and Nebraska headed to the locker room with a 53-31 halftime lead.

“Laudermill, she couldn’t miss in the first half, and we couldn’t buy a bucket,” Wisconsin head coach Bobbie Kelsey said. “Defense wasn’t very good, we went over the plays but we still got a little confused.”

In the second half, Laudermill adjusted her style of play and used her speed to get to the hoop.

“In transition is really where [she] hurt us,” Laudermill said. “She got a couple of layups just in transitions. She is very quick.”

“I know they wanted to take away my shot but I’m blessed with my speed so I was able to go past and get layups,” Laudermill said.

Laudermill came into the game shooting 26.5 percent from three and was only averaging 11.8 points per contest before catching fire against UW. But early in the first half, Laudermill made three of her four three’s as part of a 9-4 stretch that began to bury the Badgers.

Last year, Laudermill went off for 21 points against UW in a 71-70 overtime victory for the Cornhuskers at the Kohl Center.

Nebraska forward Emily Cady was the efficient one for the Cornhuskers. She was a perfect 7-7 from the field with two three-pointers, tallying 16 points in the half. She only took two shots in the second half, both three’s, and made one, finishing with 19 points.

“To their credit they hit open shots. We had some open shots too but didn’t hit them,” Kelsey said. “And that’s the difference between winning and losing, putting the ball in the basket.”

Laudermill’s and Cady’s efforts were instrumental in NU’s impressive first-half shooting percentage (61.8 percent) and shot 21-34 from the field and 7-10 from three.

Wisconsin was somewhat successful in containing Nebraska guard Rachel Theriot, who scored 11 points on 4-17 shooting. She came into the game averaging 17.6 points per game.

“Theriot’s a great player and I do what I can on defense,” junior guard Tessa Cichy, who defended Theriot for a majority of the game, said. “There’s not really any comfort when you lose and give up that many points.”

The Badgers outscored the Cornhuskers 41-36 in the second half, and were able to find some solace in that. They began the half on an 8-0 run and cut the Hukser lead to 14 at 55-39 two minutes and 30 seconds into the second half after a Bauman three-pointer, but that would be the closest UW would get for the rest of the game.

Still, UW’s poor defensive effort in the first half ruined any chance of taking this one despite the improved second half.

“We got it going on offense today, but they played well enough on offense to win that game,” Nebraska head coach Connie Yori said.

“I’d rather have a player who’s all defense than all offense,” Kelsey said.

“Maybe some people were thinking about offense more than defense.”