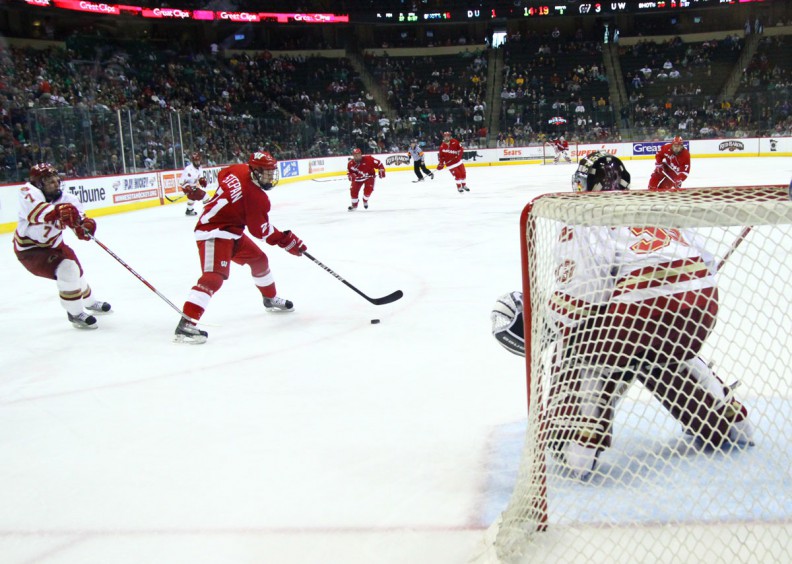 A flight cancelation resulted in Eaves missing the summit, which he described as the first time the NHL got to hear college coaches’ grievances regarding early departures.

Much like junior hockey leagues provide a place for college recruits to bide time before joining an NCAA program, college hockey essentially acts as a feeder system for the NHL. The allure of earning money and finally playing in the NHL is hard to resist for many kids.

“Playing in the NHL’s been my dream since I was five years old,” former Badger Kyle Turris said in a phone interview. “Having the ability to play in the NHL after the first year of university, as it was, it’s my dream and what I always wanted to do.”

Also considerable is the impact of the major junior route in the Canadian Hockey League. Made up of three member leagues, major junior features the same age group as other junior leagues, but the NCAA considers the CHL to be professional, eliminating college eligibility.

CHL is generally considered the top developmental hockey league in North America and many of the NHL’s top players – guys like Sidney Crosby, Steven Stamkos and Eric Staal – played major junior instead of NCAA hockey.

While those teams are often more talented, a player can only play until he is 20 years old. Not every kid is physically ready to play professional hockey at that point and could potentially find himself stuck with nowhere to go.

But the NHL has leverage and isn’t in any position to give it up. Part of the appeal of college hockey is being able to stay for one year or four, depending on the needs of the individual. Forcing kids who want to play NCAA hockey to stay three years might push more of them to go the major junior route instead.

And given the NCAA and major junior are equal feeder systems for the NHL, any agreement would need to appeal to not just one, but two other parties.

All in all, it makes for a tricky situation.

“I think that the simple answer would be, much like football, you can’t leave until after your junior year,” Eaves said. “The problem is, major junior kids are done when they’re 20. So we’re looking at two different levels, and how do we make those two work. And I don’t have the answer to that right now.”

Former Badger Derek Stepan left after two years of college hockey and said what makes the situation difficult is how much a player’s individual needs can vary. One player might be physically ready at age 19, while another might not fill out until he turns 23. In short, there’s no catch-all solution.

“I’m not quite sure if I was put into that situation, what I would do. There’s different situations for every player,” Stepan said in a phone interview. “I definitely think I still would have gone to college regardless. At the time [I] went into college, I was still a couple years out from even being close to being ready for the NHL.

But forcing players to stay a minimum of three years could backfire as well.

“There’s also guys on the other end saying this is the way it works, guys can come in and leave early and you can’t really change the rule,” Stepan said. “If you do, they’re just not going to go to college anymore.”

While there has only been discussion rather than rule-drafting so far between representatives from college hockey, the NHL and major junior, Eaves said that is the first step toward an eventual policy change.

Whether it involves changing draft ages, how long athletes need to stay in college or even how much conversation and persuasion NHL teams can have over their college-bound prospects, Eaves said in the end, something has to be done.

“These are little details, but ultimately there’s got to be a policy that the National Hockey League, major junior and college hockey will be able to work together with,” he said.

Eaves said another chance to discuss the issue could come when the NHL general managers meet during the Stanley Cup Finals in June.

“The first step is getting together in the same room and having dialogue,” Eaves said.
“There’s a lot of bright people that are in that room and hopefully they can hear our concerns. We know what the concerns of major junior [are] and we can come up with some kind of solution.”