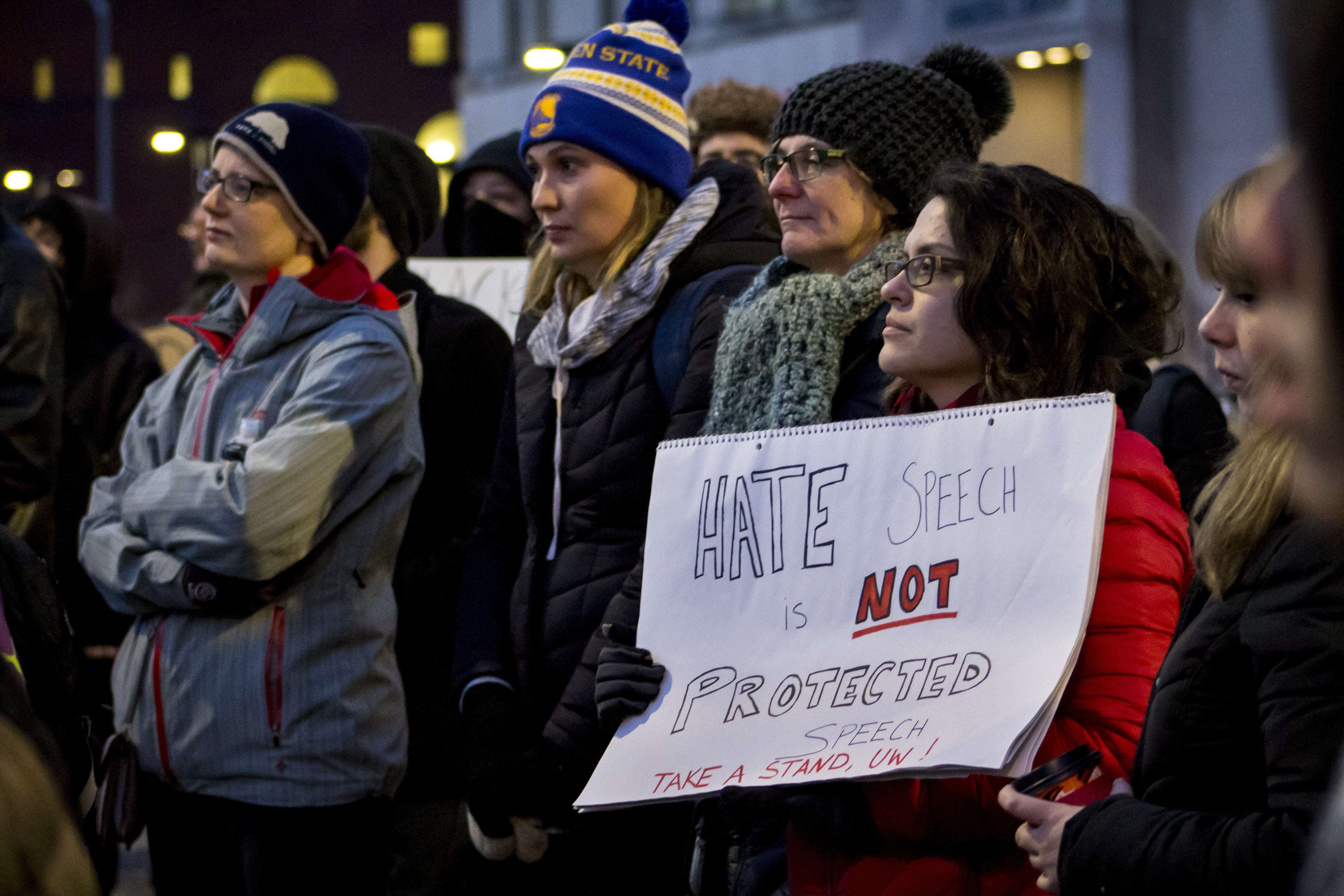 The University of Wisconsin Board of Regents voted earlier this month to approve a resolution which would ramp up punishment for students whose protest is seen as disruptive to the free expression of others on UW campuses.

In the resolution passed by the Board of Regents, a UW student who is considered disruptive to the free expression of others on two separate occasions will face suspension. That same student will face expulsion if he or she is found to have disrupted free expression a third time.

Pamphlet outlining unacceptable protest under the new Board of Regents resolution

The regents’ most recent free speech resolution comes in light of the Wisconsin State Assembly’s passage of the Campus Free Speech Act, in which the Legislature called on the Board of Regents to instate a policy protecting free speech on campus. Most notable about this resolution is the addition of punishment guidelines for those who are believed to have disrupted or prevented free expression.

Many of the regents supported the resolution due to the protection which they viewed it would provide speech deemed controversial, disagreeable or even offensive to students on campus. Regent Ryan Ring called free expression “vitally important” in academia.

“I believe this proposed policy does a great job at making it clear the university strives and promotes academic freedom and freedom of expression on all of our campuses,” Ring said.

Opponents to the resolution criticized its vagueness and said clearer guidelines are needed to ensure fair and consistent implementation.

At the conclusion of the Oct. 6 meeting, the resolution passed the Board of Regents with a nearly unanimous vote. Only Tony Evers, State Superintendent of Public Instruction, voted to reject the resolution.

Evers said nothing has happened on any of the UW campuses to warrant the passage of this resolution, especially given the recentness of the free speech resolution passed in December 2015 and reaffirmed in July of this year.

“There has been no extraordinary disruptions on campus that we need to further constrain free speech,” Evers said. “This appears to be a solution seeking a problem.”

On campus, student leaders have expressed both support and concern for the resolution, as well as the impact it may have on the ability for students to protest.

Katherine Kerwin, Chair of the Associated Students of Madison Legislative Affairs Committee, said the resolution is an “attack” on student power and targets liberal students.

Additionally, Kerwin expressed concern the resolution will be used to protect hate speech, which she said is often the case when controversial speakers come to campus.

“I do value other forms of speech and the right to free speech, but we need to take into account that certain speakers have come not to promote a different ideology, but to promote hatred and to divide campus,” Kerwin said.

Kerwin said one of these speakers was conservative pundit Ben Shapiro, who came to campus last year amid intense protest. Kerwin rejected claims that Shapiro was unable to express his views as a result of this protest.

In light of these protests, YAF Chair Abby Streu expressed her support for the policy put forth by the Board of Regents.

“Diversity of thought and intellect is imperative to have on a university campus, and that should be respected by all members of the student body, faculty and administration,” Streu said. “The free speech policy protects people from being silenced because free speech needs to work for both sides. Each side has the right to be heard — they have the right to protest and the right to bring speakers. Neither has the right to silence the other.”

While the effect this resolution will have on the ability for students to protest remains to be seen, UW plans on issuing pamphlets to make clear the distinctions between acceptable and unacceptable protest.