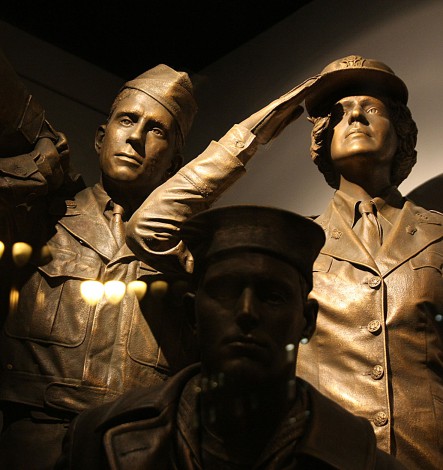 The Wisconsin Veterans Museum honors the men and women of who fought in past wars.

A bipartisan bill introduced by two Republican legislators will ensure University of Wisconsin System undergraduate students who are members of the Wisconsin National Guard will get the full cost of tuition reimbursed in a timely manner.

In the past, the Wisconsin Department of Military Affairs was reimbursing all students $4,636.68 — but the business and engineering programs are more expensive due to differential tuition, John Bechtol, UW assistant dean of students, said in an email to The Badger Herald.

Jon Rogowski, legislative aid for Rep. Mike Kuglitsch, R-New Berlin, said the legislation isn’t changing anything in practice, only assuring that 100 percent of tuition will be covered for guard members, regardless of the program they choose.

“A promise made is a promise honored — no matter what program a guard member may choose, full cost of tuition will be covered,” Rogowski said.

The student is reimbursed for tuition at the end of the semester as long as they earn a term GPA of 2.0 and have no failing grades, according to the bill.

In addition to guaranteeing that the full cost of tuition will be covered, the bill also looks to address the “slow and cumbersome” application process for reimbursement, Bechtol said.

If the WDMA begins reimbursing by direct deposit instead of mailing paper checks, students should get their payment faster, Bechtol said.

“The bill clarifies the process would allow the Department of Military Affairs to verify grant requirements electronically so the payment schedule is much more fluid,” Rogowski said.

Bechtol said a survey last spring showed 80 percent of students using the grant paid late fees on their tuition because of the delayed reimbursement checks.

“The bill allows government to adapt as technology advances to make sure our veterans get reimbursed on time in order to avoid taking out additional costly loans,” Rogowski said.

Behctol said it would be great if the process of reimbursement could be made easier for the student because it would be “beneficial all around.”

The bill is currently circulating for cosponsorship. After that, it will be sent to the chief clerk’s office before being referred to a committee in the state Senate.