In an attempt to address the cost of higher education, Wisconsin legislators have reintroduced a “Higher Ed, Lower Debt” bill to help students alleviate their debt. 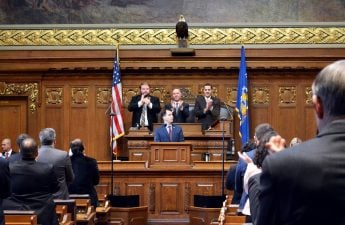 Average debt at graduation rose at more than twice the rate of inflation from 2004 to 2014, according to the Institute for College Access & Success. The institute is an independent, nonprofit organization that conducts nonpartisan research and advocacy.

The assembly bill would create a public body called the Wisconsin Student Loan Refinancing Authority, which would partially be governed by students.

Under the bill, the board must develop and implement a loan program under which state residents may refinance student loans. Under the program, WSLRA would provide a loan to an individual to pay off some or all of his or her outstanding student loan debt.

In the past, opponents of the measure, such as State Rep. Dave Murphy, R-Greenville, said while the bill had “good intentions,” it also had “bad mechanics.”

The bill also covers what financial information universities and other institutes of higher education must provide to prospective students and other aspects of financial aid.

“This crisis is costing our state jobs and preventing too many families from getting ahead,” Doyle said.