As part of a new set of cultural competency initiatives, the University of Wisconsin will build a Black Cultural Center to provide a safe space for black students on campus, but some are concerned the rise of spaces like this might conflict with free speech.

This semester, a committee of student leaders, staff and faculty will make plans for the use of the space and the programs it will contain, UW spokesperson Meredith McGlone said.

The center will be housed in the Red Gym next to the Multicultural Student Center. Willie Ney, executive director at the Office of Multicultural Arts Initiatives, said the opening of the center is beneficial at a time when a particular community has been underrepresented.

“I think it’s great to be able to celebrate that community in a dedicated space that will bring positive things,” Ney said. ‘Hoodwinked’ exhibit visits black narrative, offers message of hope“Hoodwinked” is more than just an art installation — it is a journey through the past, present and future of Read…

Every time the university sets up a center on campus, it has something distinctive to contribute in terms of knowledge and insights, said Donald Downs, a UW professor of political science and expert in free speech.

But Downs said he is concerned that continually building safe spaces will become a problem as it teaches students to be sensitive to vibrant discourse, which he believes to be an important part of maturation and constitutional citizenship.

“If the [students there] end up saying ‘we have our own theories, our own beliefs, and it’s up to you to agree with us and not think for yourself and not challenge us,’ then that would be bad,” Downs said.

While UW promotes its cultural competency initiatives and plans to build safe spaces on campus, such as the Black Cultural Center, other U.S. campuses have found an issue with these programs.

In a letter to its incoming freshman, the University of Chicago made it clear that they will not support building safe spaces and do not plan to place “trigger warnings” on sensitive material. 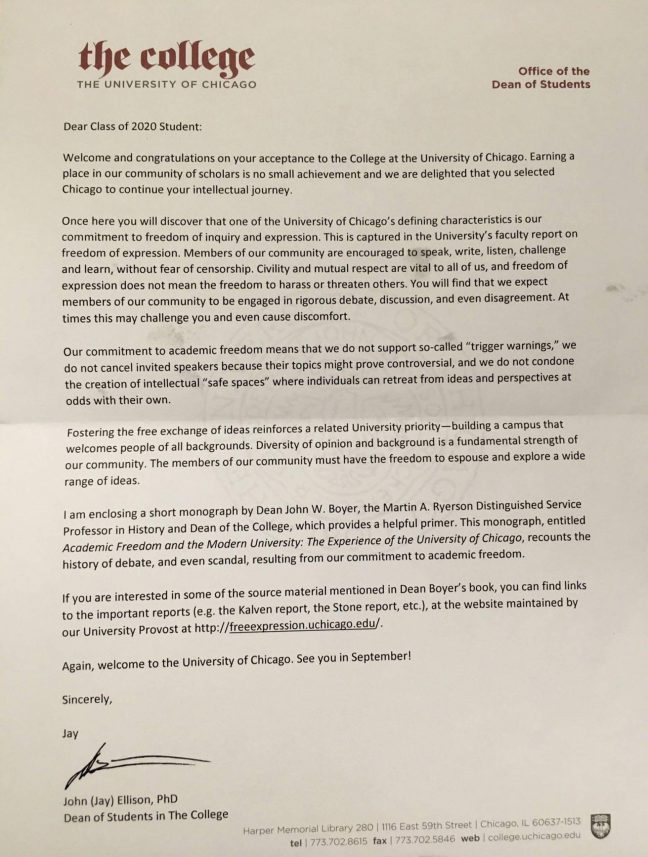 “It’s a fundamental principle for freedom of speech that offense alone cannot be ground for saying ‘you shouldn’t say that’ or ‘you can’t say that,'” Downs said.

Instead, Downs recommends criticizing the ideas at hand during debates and discussions — not the person who is expressing them. It is better to challenge an idea using evidence and reason rather than saying something is offensive.

But Chancellor Rebecca Blank said in a press call Aug. 31 that safe spaces and free speech do not need to conflict, and that UW can embrace both.

“I don’t think that there is a dichotomy between being … an effectively diverse and inclusive community and also being a community that protects and encourages free speech,” Blank said.

Similarly, Ney said he believes the center will give voice to a community that has not had the opportunity to have their issues dealt with and represented in a legitimate way.

“I think [the center] is a great conduit for opportunities to highlight a community that has been so marginalized and victimized,” Ney said. “That kind of dialogue is important.” But if the center reinforces the idea of being separate from others and believes the whole campus is prejudiced against the black community — which Downs said he doesn’t believe is true — he said it could actually undermine the common ground that is necessary to build true mutual respect.

Downs said the construction of space spaces has to be limited to where it’s truly appropriate.

“People need safe spaces for various things, but you certainly don’t want the whole campus to be a safe space,” Downs said. “I have concerns for overdoing things like safe spaces.”