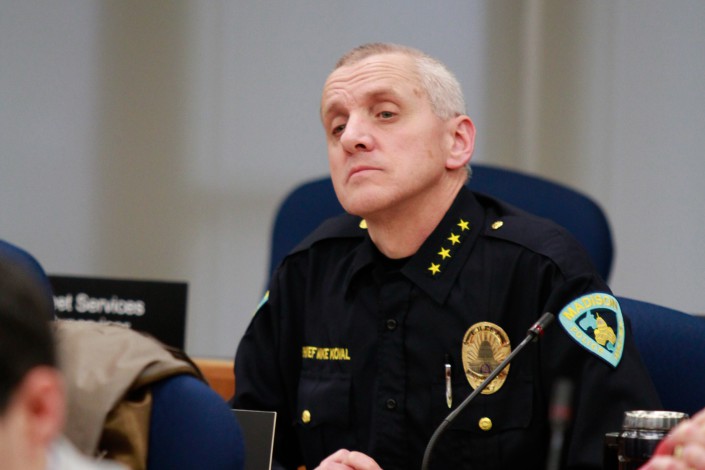 Two officers arrested 18-year-old Genele Laird at East Towne Mall for disorderly conduct and for making threats to the officers and mall staff.

According to an MPD incident report, Laird confronted a Taco Bell employee at the mall, claiming that her phone had been stolen. She then displayed a knife and threatened the employee. When mall security responded, Laird made multiple threats to kill them.

Shortly after, MPD officers were dispatched at 5:15 p.m., and used a taser to subdue her. Laird was then transported to the Dane County Jail, where she still remains.

At a news conference Wednesday, Koval said an administrative review is underway for the two arresting officers to determine if they used appropriate force.

The incident garnered widespread attention after video footage of the arrest surfaced on social media shortly after the incident occurred. The video has fueled an outpouring of mixed support and condemnation for the actions of the two MPD officers from the community and elected officials.

In the video, a lone officer attempts to subdue a struggling Laird before receiving assistance from another officer. Together, they wrestle her to the ground and handcuff her after using an electronic control device, a form of taser designed to incapacitate specific muscle areas. Laird spits on the officers, who then responded by putting what appears to be a bag on her head — which Koval later clarified to be a mesh anti-spitting hood.

“[The arrest] went from bad to worse in terms of her unwillingness to simply surrender her liberty,” Koval said.

Koval refused to release the names of the officers involved, citing numerous threats against them the 911 center has received. He declined to pass judgment until the conclusion of the internal review and said he was in no rush to put the officers back on patrol.

Both arresting officers were sent to the hospital for injuries sustained from attempting to subdue Laird, but have since been released. One officer is on paid leave due to back problems stemming from the arrest.

Koval said he has spoken with several community leaders who reached out to him following the arrest as well as the suspect’s family.

“I met with alders and Michael Johnson of the Boys and Girls Club along with close family members [of Laird’s],” Koval said.

In a statement, Sen. Stephen Nass, R-Whitewater, praised MPD for keeping the community safe and called out Rep. Chris Taylor, D-Madison, for a statement, in which she called for an independent review of the officer’s actions. He said Taylor was being inflammatory for her use of the “race card.”

Koval said his department’s interactions with Madison residents are almost always peaceful and respectful, with only a handful of incidents ever escalating to violence.

This incident, however, comes at a time of conflict between MPD and community members. A June 7 City Council meeting led to heated confrontations between the chief and several alders over a proposed $400,000 review of the police department. The resolution passed after hours of tense conversation.

Koval said MPD would have to work even harder to overcome the negative narrative created by the video.

“We will redouble our efforts to community outreach to overcome the stigma of this incident,” Koval said.