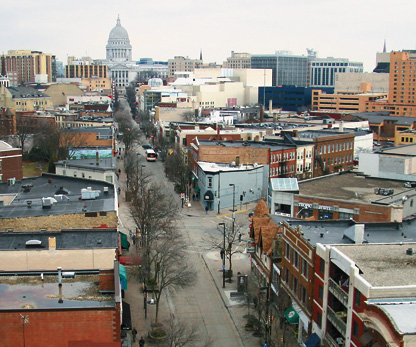 Wisconsin job growth is fueled largely by newer, smaller businesses and startups, a recent University of Wisconsin-Extension study shows, and UW students are eager to get on board with the booming startup scene.

According to the study, conducted by economics researchers Tessa Conroy and Steven Deller, the U.S. Department of Commerce’s Small Business Administration’s definition of a “small business” is one with less than 500 employees. In 2012, 91 percent of job creation in Wisconsin came from businesses that met this criterion. The study also shows 28 percent of Wisconsin job creation in 2012 came from businesses with 10 employees or less, and firms five years old or younger accounted for 46.5 percent of all job creation.

“Increasingly, one of the more important economic opportunities is recognizing that an increasing number of people are pursuing small business startups,” Conroy and Deller said in the study. “Policies focused purely on wage-and-salary jobs; [they] ignore an important trend over the last 10 years in the economy.”

Based on his experience in the field, Boucher agreed with the study’s findings.

Boucher, whose firm focuses on defending small businesses, said the difference between Wisconsin and other states when it comes to new business startups is that there are fewer “risk-takers.” He said a major way to increase the number of people willing to take part in business startups is to target young people.

Despite the support Heads N Tails sees from the Madison community, Twohig said it has taken Rob Davis, former hog farmer and Heads N Tails owner, about two years to get the project going.

A major challenge small business startups face, Twohig said, is securing funding, which plays an integral role in keeping a business afloat into the first few years of its existence.

Stephen Gaschignard, a former intern at InHub — an online request for proposal platform for trustees and investment advisors — said in an email to The Badger Herald InHub also still relies on funding from a private investor, despite solid revenue streams that have been growing since it was founded in 2014.

Boucher said, however, new businesses can survive if the people involved are persistent, know their business and love what they do.

“You can think of businesses as people — older people don’t have the energy that young people do,” Boucher said. “We need to attract young people who have the vibrancy to make a small business succeed.”

Gaschignard said in the email students and startups can easily support each other, because the startup community in Madison is usually seeking bright, talented individuals to support their teams, and startups often don’t have many resources to offer.

Gaschignard also said taking part in startups is a great way to put the skills students have learned on campus to use and gain real experience.

“I would argue that the startup scene is an incentive for students to choose to come to Madison over other universities,” Gaschignard said. “There are excellent work opportunities here thanks to the startup scene.”