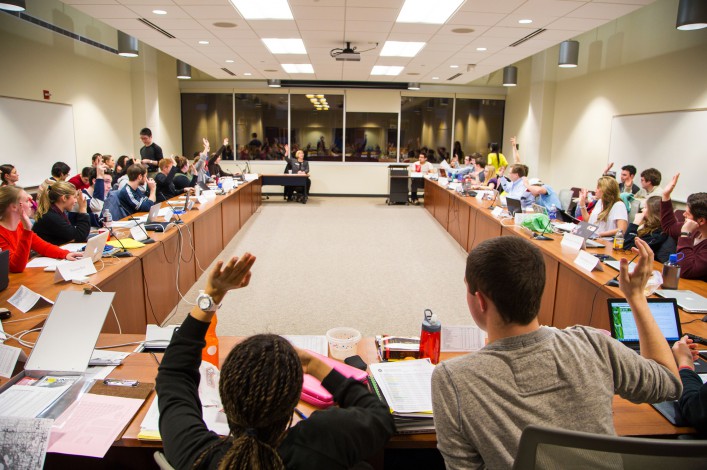 The Associated Students of Madison passed a resolution recommending the university cut ties with JanSport, possibly butting heads with Chancellor Rebecca Blank in a move to support shared governance and workers’ rights.

The legislation seeks that the University of Wisconsin cut ties with JanSport because it has not yet signed the legally-binding Bangladeshi Accord on Building and Fire Safety.

“By approving this resolution today, you are supporting the decision made by this committee and effectively supporting shared governance in practice,” former ASM Chair David Gardner said.

According to ASM Vice Chair Derek Field, when the shared governance committee Labor Codes and Licensing Compliance Committee recommended last spring that the chancellor nullify its contract with JanSport as a result of 1,100 deaths at a sweatshop in Bangladesh, the chancellor degraded the status of the committee to an advisory one, removing its effectiveness.

The new committee, the Labor Codes and Licensing Advisory Committee, has reduced control over appointments and no longer has the power to select its own chair. Many ASM representatives saw this as a restriction in shared governance rights and aim to restore them with the new legislation.

“I think this committee has done a really good job of not giving into decisions made by powerful people on this campus, such as the chancellor,” ASM Rep. Jessica Franco-Morales said.

Blank has argued there is no reason to cut ties with JanSport given the fact it has no operations in Bangladesh.

Students from the Student Labor Action Coalition recently held a small demonstration in Bascom Hall to urge Blank to cut ties with the company.

But Blank wrote in a letter that JanSport has autonomy from its parent company and can choose where it sources its labor. Therefore, she wrote JanSport has not violated the university’s labor code of conduct. She wrote it would be a breach of contract if UW cut ties with JanSport since it does not affiliate itself with the actions of its parent company.

The committee originally was charged with evaluating all contracts the university makes with major outfitters who use University of Wisconsin logos.

Field said before last summer, it also had the power to direct the chancellor to nullify certain contracts which she was legally obligated to follow.

“It wasn’t clear in the first place whether the chancellor had the authority to degrade the committee; she just claimed to have that right and then she did it,” Field said. “It’s now unclear as to what can be done to remedy the situation.”

Field said the approved resolution is one of the only ways ASM can act. He said the resolution agrees with the original committee’s decision that the contract with JanSport should be cut from the basis of clear violations of labor ethics standards.

He said the ASM resolution also expresses their opinion that the chancellor’s degradation of the original committee into the LCLAC be reversed because they run contrary to shared governance. However, Field remained skeptical the chancellor would listen.

“She’s probably not going to listen this time like she didn’t listen last time,” Field said. “We continue to remind her about standards of labor ethics and see if she decides to respond.”

Field said even though JanSport does not have operations in Bangladesh, its parent corporation, VF, which does maintain factories in that country, makes money off UW’s contract with JanSport.