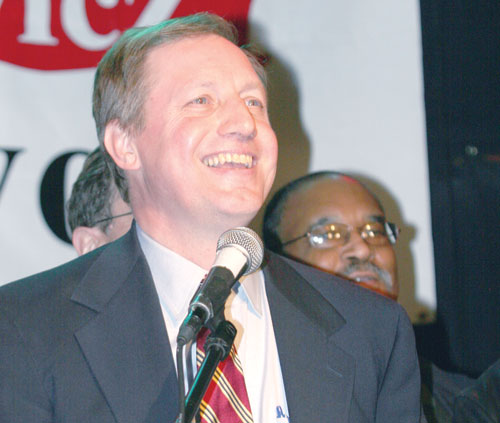 View Gallery (2 Photos)
Nearly two-thirds of Madison's electorate agrees: Four more years for Mayor Dave Cieslewicz. In a resounding victory over challenger Ray Allen, the incumbent mayor is set to begin his second four-year term after garnering more than 61 percent of the vote in last week's mayoral election. The gap between the two candidates was particularly large in student-populated districts. Between Districts 4, 5 and 8 — which encompass the entire University of Wisconsin campus and the majority of off-campus student neighborhoods — Cieslewicz reaped an amazing 71.9 percent of the vote. In District 8, which centers on the UW campus and includes the southeast dorms, Cieslewicz won slightly less than 65 percent of the vote. Though Cieslewicz conceded students may disagree with him over a few city policies — such as the controversial Alcohol Density Plan, which he supports — the incumbent mayor said Tuesday's vote proved students sided with his overall vision for the city of Madison. "I know that the density plan is not popular on campus, but students still voted overwhelmingly for our candidacy," Cieslewicz said during his victory party last Tuesday night. "I think what it shows is that students are interested in a broad range of issues." Campus issues were a focal point for both Cieslewicz and Allen throughout the mayoral race, as both candidates differed on a number of alcohol and downtown safety policies. During his campaign, Cieslewicz often pointed to his $100,000 Downtown Safety Initiative — which would fund city police overtime as well as downtown surveillance — as one of the measures he has launched to address students' growing safety concerns. Cieslewicz vowed to continue those initiatives in the upcoming term. "This current feeling of uneasiness on campus really concerns me, and we need to turn that around," Cieslewicz said. "That's priority one." Another topic of debate during the campaign was Madison's annual Halloween celebration. Last year, Cieslewicz helped institute a gate ticketing system that he has said contributed to the "first peaceful ending to Halloween in four years." "We had a good success for Halloween last year. I think that's something we can build on," Cieslewicz said. "I hope to string together two or three successful Halloweens, and then I think we'll be in really good shape." Though the mayor expressed optimism in Madison's near future, outgoing City Council President Austin King said Tuesday it would depend on the City Council to push for change. "The last council, if marked by anything, was marked by its reluctance to serious progressive change," King said. "It was a council that was ultimately rather timid. Even though the politics haven't changed, I hope the courage has." However, King added Cieslewicz was the right man to help spur that change. "I'm thrilled that Mayor Dave was re-elected," King said. "He is a solid progressive with deeply held values — and that is the reason he won." Despite his loss, Allen said Tuesday he was proud to have brought a variety of issues to Madison's political forefront, including poverty and crime. "I feel good that I focused on the issues that I think were very important to this community and to this campus area," Allen said from his postelection party Tuesday. "We brought forth issues that had not been discussed by this city before." With the mayoral and aldermanic elections come and gone, King challenged the next class of city leaders to continue to address the pressing issues facing Madison. "I think the city of Madison is at a crossroads in a lot of ways," King said. "And we need some bigger ideas than where to put the next bus route."
Share Tweet