Iowa struggled on the offensive end early on, scratching the scoresheet for the first time when Monika Czinano hit on a post look off an excellent thread from Caitlin Clark mid-way through the opening period.

UW committed four turnovers within the first six minutes of play, allowing Clark to cash in from three feet behind the line and on a transition layup in back-to-back possessions. After one, the Hawkeyes led by seven.

Iowa continued to illustrate its offensive savvy in the following frame, executing on 10 of 15 shots from the field. Powered by six points from the do-it-all Clark, the Hawkeyes poured in four buckets and a pair of free throws in the final three minutes of the first half, extending their edge to 18. By intermission, Czinano and Clark combined for 29 points, nine more than Wisconsin’s entire squad. 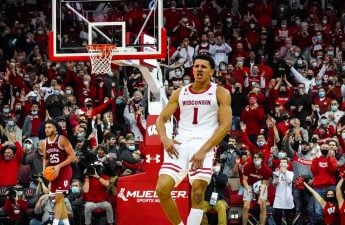 The Hawkeye’s National Player of the Year candidate took over the first portion of the third quarter, leading the Hawkeyes on a 17-7 run with six points, three rebounds and three assists. Addison O’Grady and Kate Martin picked up where she left off, knocking down four layups and elevating the lead to 33 before the final stretch.

The Badgers played hard in the fourth, chipping into the Iowa advantage with some big-time baskets from Krystyna Ellew and Julie Pospíšilová. Despite a 75% clip from deep and 50% efficiency from the floor during the final period of regulation, the Hawkeyes closed out the Badgers with seven unanswered points.

Caitlin Clark’s ability to feed O’Grady and Czinano in transition and the low post proved too much for UW to overcome. The three combined for 60 points and 27 field goals, more than all seven Wisconsin scorers.

With an astounding 59% from the floor and 41.7% from downtown compared to just 32.3% and 33.3% from behind-the-arc for Wisconsin, Iowa led for over three quarters of regulation on Thursday evening.

After the game, I asked coach Moseley how she prepares for someone like Caitlin Clark.

“I don’t know that you can prepare for a kid like [her],” Moseley said. “She’s so gifted at all three levels … sometimes women’s basketball needs players like that.” 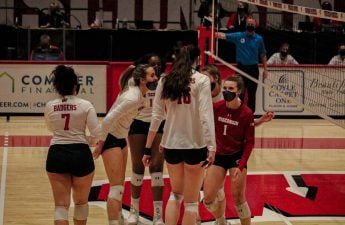 For the Hawkeyes, Caitlin Clark, the 2020-2021 Dawn Staley Award Winner and Big Ten Freshman of the Year, punched in a game-high 12 field goals for 27 points, pulled down 11 rebounds and totaled 11 assists with an eye-popping 66.7% from the hardwood in her 31 minutes of action. Freshman Addison O’Grady claimed three swats and canned seven field goals for 16 total points, and senior Monika Czinano managed 17 points and five rebounds off an impressive 61.5% split.