The two last met in December 2018, with the Phoenix handling Madison’s team 55-46 in a low-scoring affair. With a 4-9 all-time mark and 2-8 record in their last 10 matches since November of 2009, the Badgers look to steal a win against another in-state opponent on Sunday afternoon.

Led by Kevin Borseth, the anchor of 12 Green Bay squads that have reached the NCAA tournament over 20 years, the 2020-21 Phoenix group went 15-7 and secured a spot in the Horizon League Conference championship game.

Despite falling short to Cleveland State by just six points, the Green and White recorded a 14-4 mark in conference play, enough to finish third behind Wright State and Milwaukee. 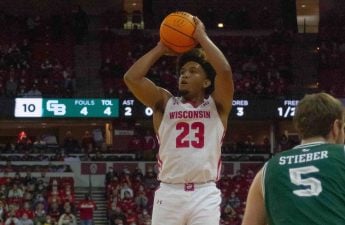 Through eight games this season, Borseth’s group averages 58.9 points and totals 14.1 scores off of turnovers per game. With the departure of last year’s leading scorer, Caitlyn Hibner, Green Bay ranks in the bottom half of the nation at only 30.1% from three-point range and a sub-par 36.9% from the field.

Across the hardwood, UW averages 60.4 points per outing on 40.6% from the field and 27% from downtown. The Badgers force 7.4 steals, chalk up 11.4 points off turnovers and grab 31.6 rebounds. They rank 331st out of 348 qualified programs in the country. With only 14.4 giveaways per outing, Wisconsin ranks 64th for fewest turnovers in the nation.

Wisconsin junior Sydney Hilliard ranks in the top ten among guards in the country with 56.3% efficiency from the floor. Without a single three-point attempt, the Wisconsin native averages 14.2 points, 5.2 boards and 1.8 steals in about 34 minutes of action a game. The 5-foot-11-inch guard accounts for 58 made field-goals — 16 more than any of her teammates.

Averaging 35.6 minutes per game over eight appearances, junior Julie Pospíšilová gains 15 points, 3.8 rebounds, 3.9 assists and 1.5 steals per game. With an impressive 373 total minutes logged this season, point guard Katie Nelson leads Wisconsin with 31 assists and 19 steals, and forward Sara Stapleton registers 7.6 points off 48.4% when she checks in for Moseley. 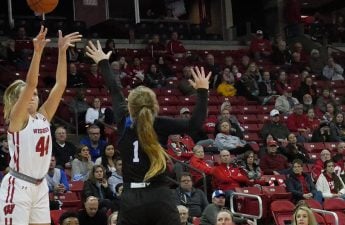 Junior Hailey Oskey, a former Wisconsin Miss Basketball award winner for Seymour High School, averages 9.8 points and 3.1 boards over 26.9 minutes per game. Through eight games, the 5-foot-10-inch guard accounts for 25 made free throws on 86.2% efficiency — already 13 more than her total from the 2020-21 campaign.

Responsible for a team best 49% from the field, 41.2% from behind-the-arc and 91.7% from the charity stripe, freshman Maddy Schreiber averages 8.3 tallies and pulls down 4.4 rebounds per contest off the bench. In only 24.6 minutes each time out, the Appleton native requires only one percentage point to eclipse the 50-40-90 club. This is a monumental feat for any basketball player — let alone a collegiate athlete.

Alongside Oskey and Schreiber, redshirt senior Meghan Pingel adds 6.9 points and 4.4 rebounds per game. The 5-foot-8-inch guard leads the Phoenix with 34 total assists this season in 219 total minutes.

After Sunday’s match vs. Green Bay, Moseley’s Badgers face a Big Ten opponent in 16 of their next 18 battles prior to the conference tournament. If UW wishes to begin the second half of their season on the right note, they will need to get out in transition and play at a faster offensive pace.

Wisconsin sizes up well against their in-state rival, and with strong performances from Hilliard and Pospíšilová, UW could certainly evade the Green and White.