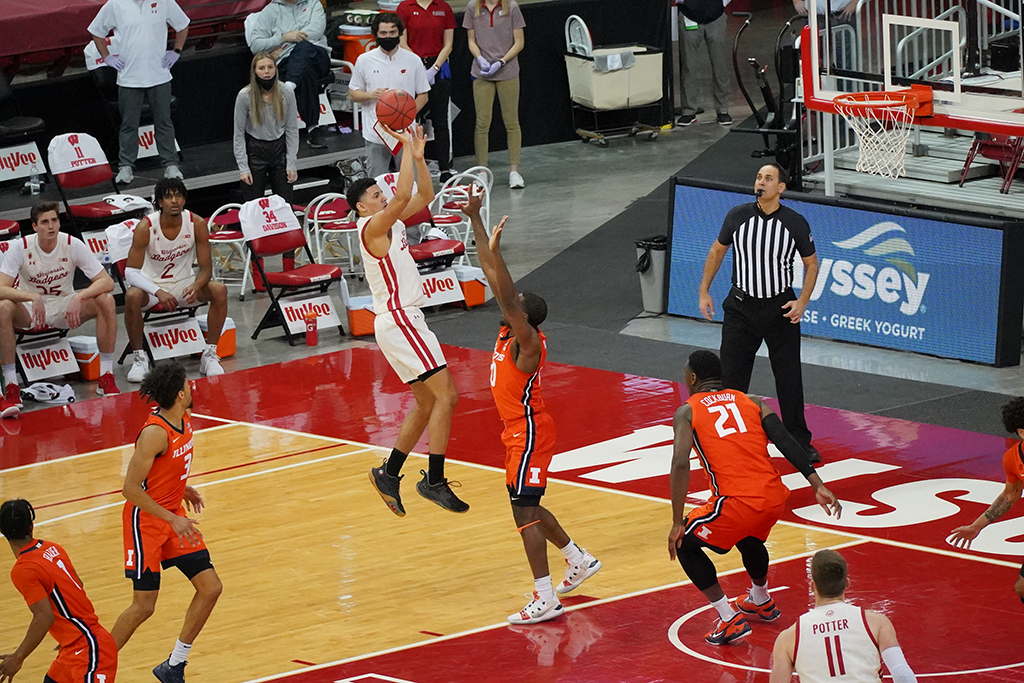 Both teams sitting at 7-1 records — Wisconsin’s recent five game win streak has them sitting at No. 22 in the AP poll. So far this season for Indiana, Mike Woodson’s Hoosier’s biggest win came against St. Johns. Indiana also played a close game against Syracuse and fell to the Orange on the road.

Wisconsin basketball legend and current fifth-year senior Brad Davison was named Big Ten Co-Player of the Week after averaging 23.5 points per game and shooting 53.6% from the field, as well as 52.9% from behind the arc.

Last weekend, donning their new “player inspired” uniforms, the Badgers welcomed Marquette to the Kohl Center to revive the I-94 rivalry. The Badgers pushed the Golden Eagles early and often, winding up coasting to an 89-76 finish.

Four Badgers finished in double figures over the weekend:

For the Badgers, entering Wednesday’s game after destroying a very solid Marquette team has the team feeling good early in the season.

“Ain’t nothing surprise me about this,” Davis said. “Every time we step on the floor, we expect to win.”

Opening the season against Indiana is perfect for this young Badger team. Coming in with so much momentum after winning the Maui Invitational, beating Georgia Tech in the ACC challenge and defeating Shaka Smart and Marquette over the weekend, the Badgers have a chance to continue their run.

This Badger team is much better defensively than many thought. Their stout defense proved early this season that it will be tough enough to stand up against Big Ten style of play.

Being able to start their Big Ten play against Indiana is a perfect opportunity for the young Badger lineup to get a taste of the slow, physical, grind style of play before potentially being exposed to teams like Purdue, Michigan and Ohio State.

The Hoosiers have lost 18 straight games in the Kohl Center, dating all the way back to 1998. Indiana’s losing streak is the Badgers’ second longest opponent losing streak — only Penn State has racked up more losses.

I see Wednesday’s game staying close throughout, but the incessant Badger defense will ultimately hold off the Hoosiers.

I really like Wisconsin and the over, though both picks I can also see losing. This game will be close and will be determined by who can get a stop late in the game. I think the Badgers will pull away late riding on the hot play of Johnny Davis and Brad Davison.

Indiana unders have hit in five straight Big Ten conference games, so I can see this game being a total grinder, but with how hot the Badgers offense is, this one is going over. Give the Badgers -4.5 and over 130.5.