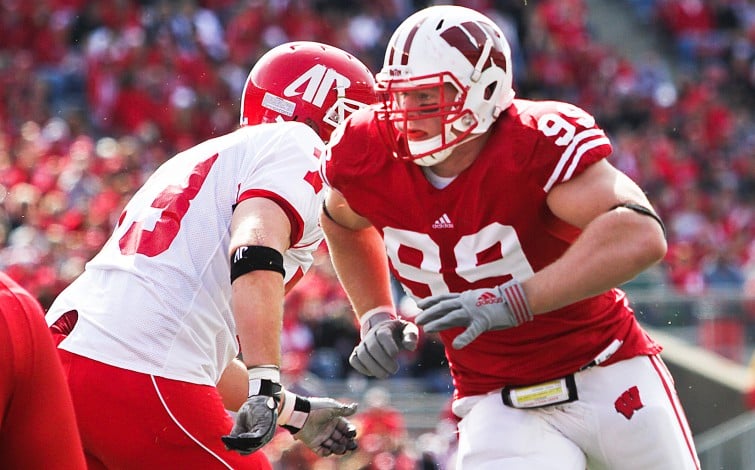 In a week three matchup between the Houston Texans and the Pittsburgh Steelers, three key Badger alumni — the Watt brothers — made history as it was just the second time in nearly a century that three brothers played in the same NFL game. In this matchup, the Steelers beat the Texans 28–21, with the youngest brother, T.J., stealing the show with four tackles and one sack for Pittsburgh. After this historic night, we decided to take a look at the illustrious career that all three brothers have had in both the NFL and at Wisconsin.

Only a two-star recruit out of high school, J.J. was not heavily recruited and didn’t even get an offer from Wisconsin. Watt attended Central Michigan University and began his career as a tight end. The next year, Watt transferred to Wisconsin as a walk-on and redshirted his sophomore year. That year, Watt showed his commitment and dedication to the sport as part of their practice squad and was named scout team Player of the Year for the Badgers.

With the coaches feeling Watt could make a bigger contribution defensively, he switched positions from tight end to defensive end. Watt finally showcased his talent in his redshirt sophomore year in 2009, appearing in 13 games and recording 44 total tackles and 4.5 sacks.

The next season, Watt took his game to another level with 62 total tackles and seven sacks. Watt was awarded a plethora of honors for his phenomenal play, being named a second-team All-American, first-team All-Big Ten and Wisconsin’s team MVP. The next year, Watt was selected with the No. 11 pick by the Texans and continued his dominant play at the professional level. In just 10 seasons, Watt has been named to the Pro Bowl five times and is a three-time Defensive Player of the Year.

Watt’s impact can be seen off the field too, as he won the Walter Payton Man of the Year Award in 2018 after raising $37 million toward a Hurricane Harvey relief fund.

Football: Game day regulations, expectations for Badgers’ first contestAs COVID-19 infection rates continue to climb in Wisconsin, the University of Wisconsin announced Wednesday night that it will be Read…

Derek committed to the University of Wisconsin in 2011. Much like his older brother, Derek would switch positions from high school, this time from defense to offense, becoming a fullback. As a fullback, Derek was responsible for blocking for Melvin Gordon, who had one of the greatest seasons as a running back in the history of college football in 2014.

That season, Gordon racked up the second-most rushing yards in an FBS season, scampering for 2587 yards and breaking the NCAA’s single-game rushing record with 406 yards in a Nov. 2014 snowstorm against Nebraska. After a stellar career at Wisconsin, Derek was drafted by the Chargers in the sixth round with the No. 198 pick in 2016.

Football: A look at Badger stars in the NFLWith the NFL season well underway, we continue to wait for the return of our beloved Wisconsin Badgers. It’s time Read…

The youngest of the Watt brothers has enjoyed a lot of recent success. In 2019, T.J. recorded 14.5 sacks and was an All-Pro. This year, T.J. has continued his dominance and is making a strong case for Defensive Player of the Year with 12 total tackles and 4.5 sacks.

Just like his two older brothers, T.J. would switch positions while attending Wisconsin, going from a tight end in high school to an outside linebacker in college. Due to a knee injury, T.J couldn’t play until his fourth season at college as a redshirt sophomore.

For his impressive play, T.J. would be awarded First Team All-American honors by Sports Illustrated and was named to the First Team All-Big Ten. After his junior year, he entered the draft and was a first-round pick by the Steelers. In just three years in the NFL, T.J. has been to the Pro Bowl twice and was named the Steelers’ team MVP last season.

Badgers across the league

T.J. is one of many Badgers to be one of the top contenders for an individual award this season. Watt was named the AFC’s Defensive Player of the Month for his solid play in September. Another former Badger, quarterback Russell Wilson, was named NFC Offensive Player of the Month for September and is one of the frontrunners in the MVP race, throwing for 1,285 yards and 16 touchdowns while leading the Seahawks to an undefeated record through six weeks.

Rookie Jonathan Taylor, whom many considered as one of the best running backs in college football last year when playing for the Badgers, is continuing his dominance with 307 rushing yards and three touchdowns in four games with the Indianapolis Colts, putting him in contention for NFL Offensive Rookie of the Year.