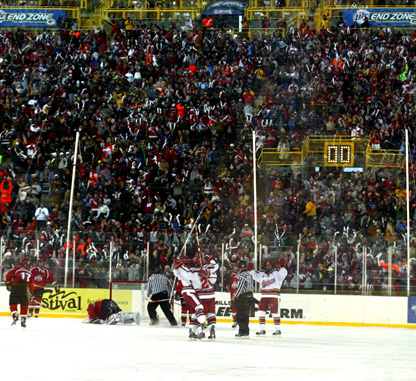 Of all the classic, jaw-dropping, nail-biting battles that University of Wisconsin sports have endured, one event stands out from the rest, as it would fit perfectly into a movie screenplay.

The year was 2006, when the No. 4 men’s hockey team entered the historic Lambeau Field under the lights to open the annual Frozen Tundra Hockey Classic against Ohio State. It was early February, with chilling temperatures of 26 degrees, yet Wisconsin fans packed in the stadium like sardines.

“The student section was shoulder to shoulder an hour before the game even started,” Wisconsin alumni Sam Jeffries recalled from his memory of the critical contest.“It was cold, I was shirtless, and it felt like swimming in warm water.”

The Badgers took the ice, hearing roars from the 40,890 fans in attendance, which at the time stood out as reportedly the fourth-largest crowd ever for a hockey game and the second-largest crowd for a college hockey game.

Fans weren’t the only ones to make the journey from Madison to Green Bay. Reportedly, 170 members of the Wisconsin Marching Band, Bucky and Kohl Center announcer Bob Look also traveled to witness UW take down Ohio State again. Previously, the Badgers defeated the Buckeyes in a first round matchup of the 2004 NCAA Tournament.

Senior Adam Burish quickly put the Badgers in the lead, burying a shot between the unsuspecting Buckeyes’ pipes a mere 23 seconds after the puck drop. It wasn’t until the second period that Ohio State seized the opportunity to catch up, when a lucky shot flew past freshman goalie Shane Connelly to tie it up 1–1.

It didn’t take long for the Badgers to retaliate. During a power play, sophomore defenseman Kyle Klubertanz ended the second period by ripping a shot from the point, putting Wisconsin in the lead once again. The Badgers dominated the first half of the game in both possession and aggression.

Topping off a strong first half, Badger fans rejoiced to hear the familiar sound of House of Pain’s “Jump Around” echo throughout the stadium’s stereo system. Even transforming this miraculous event into a film couldn’t put the feelings of anticipation and exhilaration in the atmosphere to justice.

To start off the third period, junior Andrew Joudrey extended the lead over the Buckeyes 3–1. Ryan MacMurchy made a pass from the right corner to a cutting Joudrey on the far post for a one-timer, which most fans recalled as the game-winning goal.

“I just remember the crowd pulsing as one,” Jeffries said. “Everyone was laser-focused on every play. That return, oh boy, had all the hairs on the back of my neck standing straight up.”

Though Connelly let one slip past, narrowing the lead to 3-2, the Buckeyes ultimately failed to force overtime. As they left their net empty with 1:30 left in regulation, junior Robbie Earl brought it home for the Badgers and scored his 15th goal of the season.

The Badgers took to the ice in triumph and the energy in the stadium felt nothing less than electric. Bucky and the band couldn’t suppress their Badger pride, joining in on the celebration as the fans roared. Following this victory, Wisconsin set a standard of unprecedented success.

The team went on to win the 2006 national title at the Bradley Center in Milwaukee, earning a 2-1 victory over Boston College and winning the sixth title in school history. The Badgers ended up posting a total of 30 wins to conclude the season.

This story may not be much like Disney’s “Miracle,” but Hollywood certainly has the potential to translate this tale into a blockbuster.