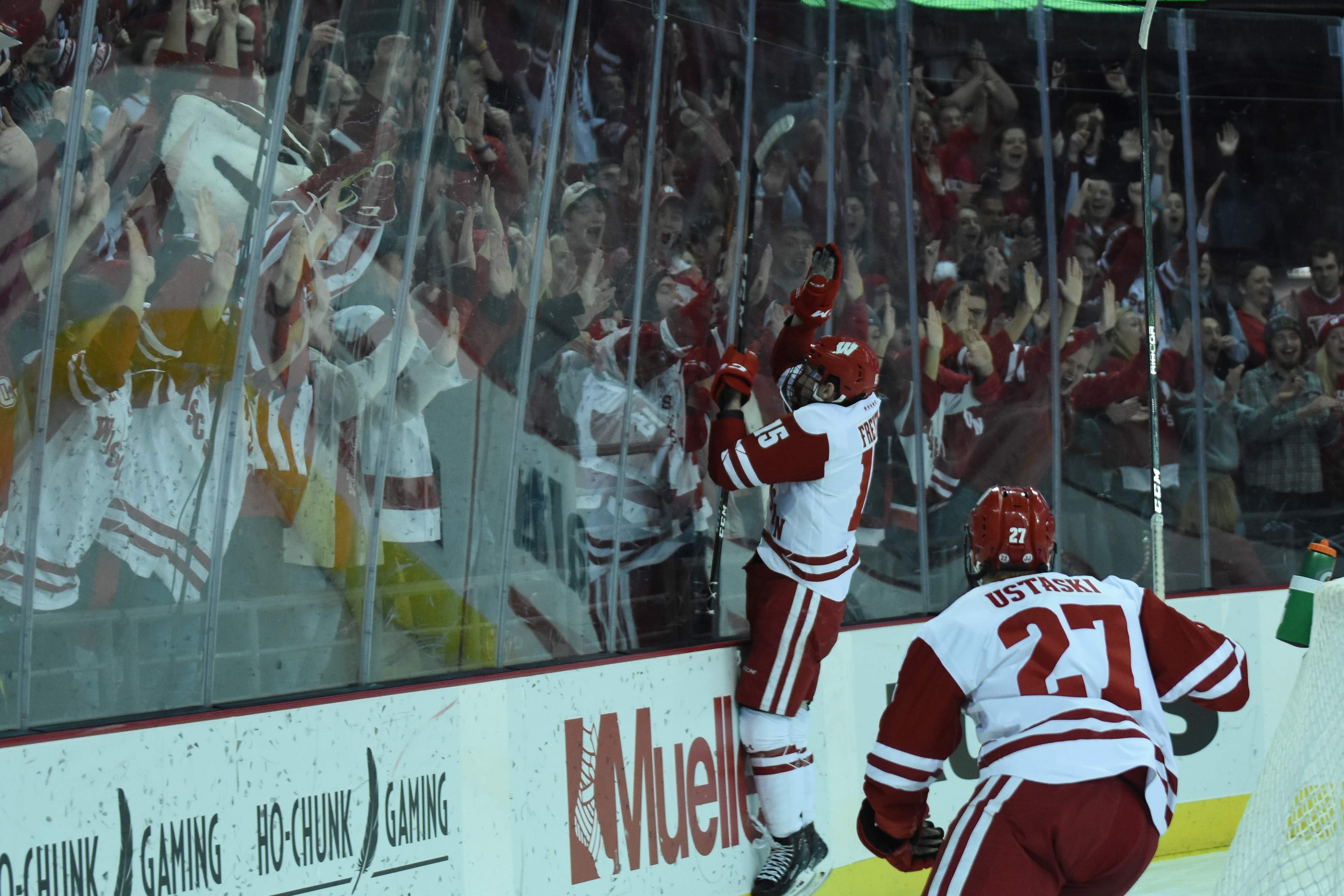 The No. 17 University of Wisconsin men’s hockey team (1-1-0) had a decent outing this past weekend in Massachusetts, bringing three of a possible six points back to Madison.

The Badgers came up just short in their season opener Friday, losing to No. 6 Boston College (2-0-0) by a score of 5—3. Wisconsin found themselves down 2—1 after the first period and played from behind for the rest of the game.

The Badgers’ offense was led by their young talent, as each of their three goals came from freshmen.

Cole Caufield scored twice in his first regular-season collegiate hockey game, both on the power play. He scored once in the first period to tie the game at one apiece and once late in the second period to bring the Badgers within one goal of BC.

BC’s freshmen shined on the other end as well, as forward Matt Boldy and defenseman Marshall Warren each found the back of the net in the second period.

Wisconsin battled back in this game, but BC goalie Spencer Knight shut the door and held Wisconsin scoreless in the third period to earn the win.

Six different Badgers found the score sheet on Friday, including forwards Alex Turcotte and Linus Weissbach and defensemen Josh Ess and captain Wyatt Kalynuk, who all earned their first points of the season to go along with Caufield and Lindmark.

Despite the Badgers enduring a heart-wrenching loss, their special teams units exceeded expectations. Wisconsin was two-for-four on the power play and killed off all five BC power plays, even scoring a short–handed goal.

Saturday’s game told a different story, as Wisconsin earned its first win of the season against Merrimack College (0-3-0) by a score of 11–5. The Badgers got off to a slow start, but took control in the second period and never looked back.

Wisconsin’s power play stayed red hot, as Turcotte and defenseman K’Andre Miller were both on the receiving ends of power play goals in the first period. However, the Warriors found the back of the net in the final minute of the period to make it a one–goal game heading into the second period.

The Warriors continued to ride momentum, as they tallied two more goals in the first two minutes of the second period. Wisconsin saw themselves trailing for the second straight game, but ultimately prevailed in dominating fashion.

Following a third Warrior goal, the Badgers’ offense exploded. Wisconsin scored six goals in the remaining minutes of the second period, providing for a comfortable five-goal cushion entering the final period, leading Merrimack College by a score of 8–3.

These six unanswered goals would only rise, as the Badgers added two more goals before the Warriors could respond. The Warriors would net two more goals, but the game was out of hand at this point, and Wisconsin came out with a convincing 11–5 victory.

Eight players combined for the 11 goals, and a total of 15 players contributed either a goal or an assist. Caufield, Turcotte and Miller lead the charge with two goals apiece and Turcotte, Dylan Holloway and Ty Pelton-Byce earned their first goals in regular–season play as Badgers.

This weekend, the Badgers proved that they can score against a majority of their opponents with ease. However, in order for Wisconsin to live up to their high expectations, they must improve their play in a few areas, specifically in their defensive zone.

The Badgers will return to the Kohl Center to play a two game series against two-time reigning NCAA champion Minnesota-Duluth this weekend.

Puck drop is scheduled for 7 p.m. both Friday and Saturday. Both games can be viewed on FSW and listened to live on WIBA.