After sitting out both practices this week, University of Wisconsin men’s basketball senior point guard Bronson Koenig will not play in tonight’s game at Michigan.

Koenig was day-to-day throughout the week, and the team announced Thursday they will hold him out against the Wolverines. Freshman point guard D’Mitrik Trice will take Koenig’s place in the starting lineup.

Hear from Greg Gard on the #Badgers lineup at Michigan.https://t.co/KIe30Mom3L 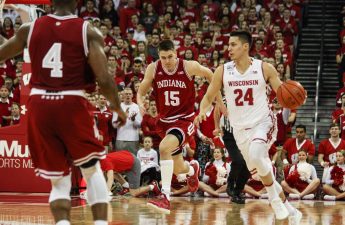 Men’s basketball: Bronson Koenig day-to-day as No. 11 Wisconsin readies for rejuvenated Michigan teamBronson Koenig did not practice Tuesday, as an injury to his lower left leg continues to bother the University of Read…

“We evaluated as we went through the week, and the medical staff made a decision pretty much yesterday,” UW head coach Greg Gard told uwbadgers.com. “We knew it was unlikely he was going to play and then made a final determination this morning.”

Koenig is coming off of a 1-for-8 shooting performance during Sunday’s 66-59 loss to Northwestern. He scored two points, tying his season low. Koenig’s 10-point run against Michigan on Jan. 17 gave UW a decisive lead and keyed its victory. It was one of the last times he was fully healthy during competition. 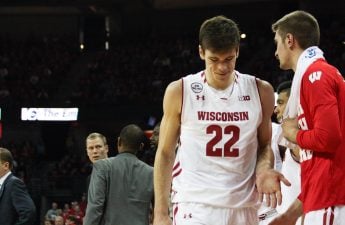 Koenig’s absence means Wisconsin will trot out a different starting lineup for the first time this season. For Trice, it will be his first career start. The freshman is averaging 5.5 points, 1.8 rebounds and 1.6 assists per game, while averaging 17.1 minutes.

“He’s ready for this moment,” Gard said. “I’ve said this all along: He’s wiser, older than his freshman year says in the program. This is a great opportunity for him.”