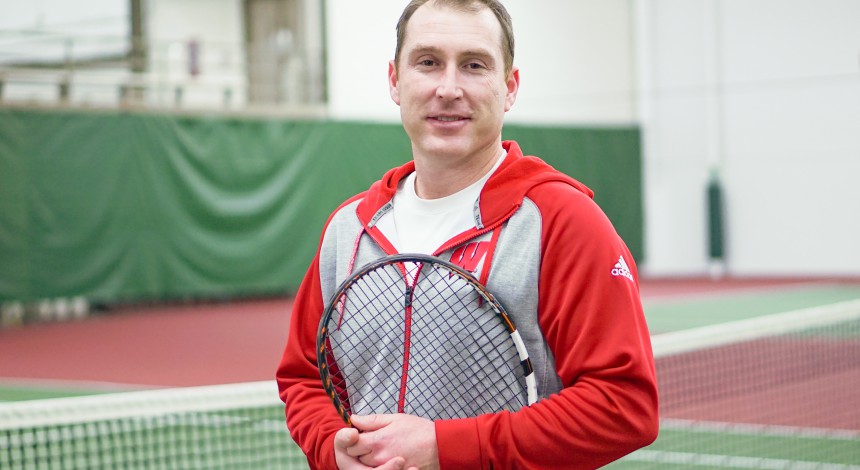 Some 18 years ago, a young man walked onto the University of Wisconsin campus unaware of just how connected his life would come to be with the university.

He would play on the men’s tennis team for four years, embarking on one of the most prolific careers in school history and winning numerous accolades. These accolades would include becoming the first Badger to win the ITA Midwest Regional tournament, a rigorous collegiate-level tournament, and the Big Ten Medal of Honor.

He met his wife at the Nielsen Tennis Center, a UW women’s tennis player herself, whose father and brother each played hockey for the Badgers. He even earned business degrees in marketing in 2002 and an MBA in 2005 from the Wisconsin School of Business.

For Danny Westerman, the man who fits this description, UW has been a large part of his adult life and in his own words, he’s a Badger at heart.

That sentiment, so profound in UW alumni, usually fades away for most graduates as they never get to experience this university again. But for Westerman, it’s all coming back.

The former No. 1 singles player for Wisconsin men’s tennis was named head coach before the start of this season and was ready to make an impact in the city and at the school he holds dear far beyond the first serve of the 2015-16 season.

“It’s an incredible feeling to be back in Madison,” Westerman said. “Some of the best memories of my life were as a student and athlete here, and getting the opportunity to come back and coach my alma mater is pretty special. My experience here as a tennis player led me into this profession, so it’s amazing to now have my dream job.”

After posting a 7-18 record during the 2014-15 season, Wisconsin men’s tennis needed a change, which came in the form of hiring Westerman as head coach.

For players who needed a jolt of energy, they required someone who could understand exactly what they were going through and only the former Badgers star would suffice.

“He was the men’s assistant coach and he graduated from here so he knows the system well, he knows Madison well,” senior Alexander Kokorev said. “He knows how it can be tough here, how the city handles you. It’s good to have someone who knows all of that.”

But even for a fit as good as Westerman, one would expect there to be a delay in mutual understanding between the players and the new coach. They would, however, be mistaken.

It is as if players on this team had been coached by Westerman for multiple seasons, for the ease to which they’ve taken to this coaching transition is uncanny.

But as convoluted as many make out sports and the psychology behind them to be, Westerman finds a simple approach to such a puzzle.

“Really, it’s just coming to practice and putting in 100 percent,” Westerman said. “If you can’t hold that of yourself and you can’t hold that of your teammates, then what are we doing this for? That’s the first thing that comes to mind, really. It’s effort-based and I’m not a stickler for a lot of little things. If the effort is there, the desire to prove is there; that covers a lot of things.”

The new coach’s mantra has made the transition easier for everyone involved. Players feel more comfortable learning from their mistakes as they’re afforded opportunities by Westerman to learn from them, as long as they’re accountable and work toward correcting them.

As an individual sport, tennis requires a significant amount of self-confidence in order to be successful. And with Westerman’s approach, players, like sophomore Joe Dodridge, feel all the more comfortable trying to up their game while knowing their coach will reward their hard efforts.

“I’ve dealt with [the transition], personally, fairly well,” Dodridge said. “It can always be difficult playing an entire year and then switching coaches because each has different ways of doing things. But I feel like Danny has made it easy for the players … He’s set out his rules and made it clear what the expectations are and what’s expected of us.”

And because it never truly is as simple as laying out expectations and demanding results, that’s where Westerman’s experience comes in.

As a former Badgers’ player, he knows just how strenuous the sport is as well as the rigors of attending the university itself. His roots have afforded him a common bond with his players, and helped foster a fast mutual understanding.

Such a quick conformity has Wisconsin flying high. Westerman’s methods and the team’s response have them ranked for the first time since the 2013-14 season at No. 74 and 6-0 overall with wins against No. 23 Minnesota and No. 34 Princeton.

A quick start has the team believing in itself and Westerman reaching for an even higher ceiling with the program he believes can, and deserves to, take its next step.