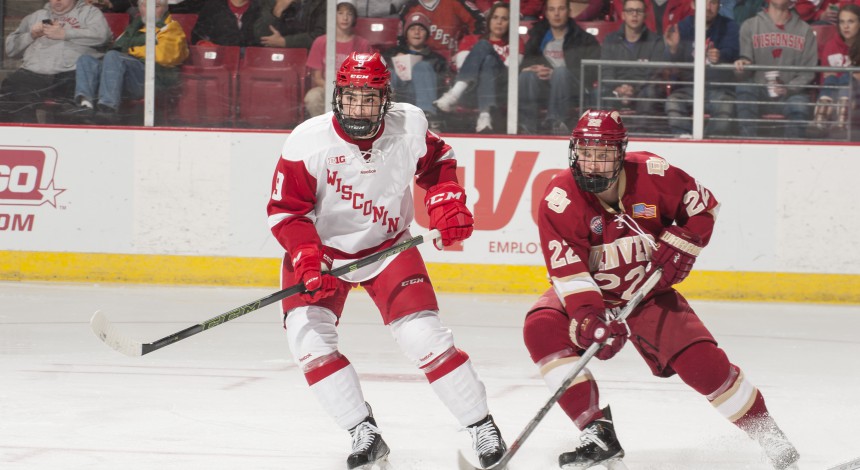 Wisconsin men’s hockey is not what it once was. It seems so long ago that they were one of the NCAA’s powerhouse programs.

But what feels like an eternity of unsuccessful play hasn’t actually been much time at all in the grand scheme of things.

Some short time ago — in fact, one only has to look as far back as the 2013-14 season — Wisconsin hockey was a national powerhouse.

The Badgers finished that year as inaugural Big Ten champions, No. 7 in both the USCHO and USA Today polls and made an appearance in the NCAA tournament.

But in the almost two seasons since, not much has happened until very recently. Two young bright spots have emerged for the Badgers in freshman forward Luke Kunin and starting goaltender Matt Jurusik.

Both Jurusik and Kunin were added to the NHL Central Scouting’s lists of top, undrafted prospects only days ago. Kunin was named the No. 16 North American skater and Jurusik the No. 15 North American goaltender.

Yet what is most interesting is that each player is part of an extreme minority on the lists. Jurusik is the only NCAA goaltending prospect on the list of North American goaltenders. Kunin is one of only two NCAA prospects in the top 20 North American skaters, and one of nine on the entire list comprising 200 skaters.

The small figures represent a growing, ever-present realization that perhaps careers in the NCAA do not lead to success. Most of the NHL’s biggest stars are products of Canadian major junior leagues.

Maybe young, promising NCAA players need to jump ship early. Surely they will hit a wall once they reach the next level, whether it be the AHL or NHL, but they need to see what is needed to elevate their game and continue their success. This is a wall their counterparts in the CHL leagues have already faced due to the competitive nature of their league.

This contributes even further to the debate that the NCAA cannot provide the same level of competition that the Canadian major junior leagues can, which is evidenced by the departure of UW prospect Luke Opilka for the Kitchener Rangers in the OHL this past summer.

Regardless, for Jurusik and Kunin, the allure of the next level is certainly there.

Jurusik only has to look as far as NHL All-Stars and UW greats Mike Richter and Curtis Joseph, who each spent only one season with the Badgers before electing to go pro. Richter would win a Stanley Cup in 1994 with the New York Rangers, a silver medal at the 2002 Olympics and make the U.S. Hockey Hall of Fame despite a career cut-short by concussions. For Joseph, he would be remembered as a fan favorite for his 19-year playing career and three all-star appearances.

Despite the obvious, that most of these players left NCAA hockey and Wisconsin early, such a basic observation lacks the depth of what is truly at play. While the NCAA may not match competition in the CHL and AHL, it is a necessary step in a player’s development.

Ryan McDonagh took three years to hone his game before he left for the New York Rangers, but like Joseph, Chelios, Heatley, Stepan and Pavelski, he and his Badgers team made some noise in NCAA postseason play during his playing years.

For Jurusik and Kunin to be taken seriously as prospects, they must elevate this Wisconsin team back to the levels its fans and the athletic department expect of it — the levels at which McDonagh, Chelios, etc. brought this program to that have allowed them to succeed.

In fact, with the diminishing level that collegiate hockey continues to find itself at, it seems an almost necessary objective for an NCAA prospect to be invited to an NHL training camp and be given consideration for a roster spot.

It is no small achievement for either Jurusik or Kunin to have been named to such a prestigious list of potential draft picks, but for now, each has to focus on the present — that present being the Wisconsin Badgers.

Regardless of the arguments countless scouts and coaches make against playing NCAA hockey over the CHL, or the longevity of amateur careers, Jurusik and Kunin have each made their choices to come play at UW. Now they must continue to grow, and in order to prove their true worth and secure future considerations just as the great UW players before them, they need to be successful at their current level.

That means bringing the Badgers back to the Frozen Four, making progress on a two-year rebuilding disaster for UW hockey, attaining a winning record and possibly even earning conference accolades themselves.

In order for these two young players be taken as serious candidates for future NHL roster spots, they need to overachieve here at UW.