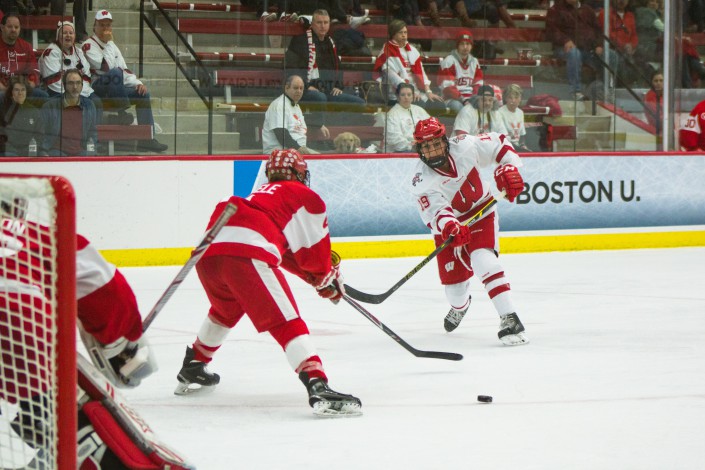 Wisconsin women’s hockey player Annie Pankowski was sitting in a science class at the North American Hockey Academy when she got the call of a lifetime — a call that would eventually give her a chance to vie for one of the coveted spots on Team USA during the 2014 Winter Olympics.

Pankowski received a call from USA Hockey senior camp coach Katey Stone, inviting her to join them for camp in Boston. Pankowski packed her bags and was getting ready for the flight home when the announcement was made, and she was one of the few that was offered the opportunity.

“Every time that you can get complimented on your game from someone that really understands the game and who can push you in a direction to get better,” Pankowski said. “Those kinds of comments always make you feel better.”

But joining Team USA wasn’t as simple as flying off to Boston in the fall. Pankowski had already signed her letter of intent to Wisconsin, and joining Team USA meant deferring school for a year.

Pankowski called UW assistant coach Jackie Friesen, excited for the chance to compete at this new level, but unsure of what to do next. The two decided that it would be in Pankowski’s best interest to defer, and that Pankowski should not let this opportunity slip away.

While training for Team USA, Pankowski lived with Boston College player Alex Carpenter. Several other Badgers, including Hilary Knight, Jessie Vetter, Meghan Duggan and Brianna Decker joined them as well. They trained together from the end of August until Dec. 21, which was when Pankowski found out that she would not be traveling with Team USA to Sochi.

“I didn’t want to waste my freshman season. I had so much more to offer,” Pankowski said.

Thankfully, her alma mater, NAHA, offered her the opportunity to come back and play with them for the rest of the year. Pankowski chose to live with her former strength coaches Julie and Ernie Roick instead of living in the dorms.

Pankowski came back to Wisconsin the following year, a year older than she originally intended to be when starting college, and with some pretty impressive experiences under her belt. But not wanting to seem boastful to her new teammates, she kept a low profile.

“I was afraid to step on players’ toes, so I kind of took it upon myself to be a quiet, hard-working person rather than a flashy, ‘this is what I’m doing, everyone should know my name’ kind of person. That way I didn’t push the boundary too far on the older kids,” Pankowski said.

Pankowski certainly worked hard, giving Wisconsin one of the best freshman performances it has seen in a while. She continues to give Wisconsin a great performance, choosing to let her accomplishments on the ice speak for themselves.

Pankowski’s story and work ethic have become a testament to her character as a player, which has caused her to become an inspiration to the newest generation of players. This is something that Wisconsin head coach Mark Johnson has noticed in her, and commends her for.

“Being from the state of California, growing up in a program of girl’s hockey and playing at a high level, and for her getting a chance to play last spring in the World Championships for Team USA, a lot of young players look up to her,” Johnson said.

Pankowski turned an experience gone bad into a great learning opportunity, and continues to be a stand-out player in the hockey world.

With the 2018 Olympics happening during her senior year at Wisconsin, it is possible that Pankowski could find herself in a similar situation again. After being denied the opportunity to compete in the Olympics the first time, she certainly knows what she would do this time around.

“Even though it was a huge heartbreak I think that it was a huge learning experience,” Pankowski said. “It’s not an opportunity I would be willing to turn down, even if it did end up how it ended up last time.

“Since I’ve been training when I was four years old, [I started to think] ‘I want to play for [Team USA],’ I think that would be so cool,” Pankowski said.

Four-year-old Annie might get her wish to don a Team USA jersey in 2018, but for now she has a bright career at Wisconsin to be proud of.