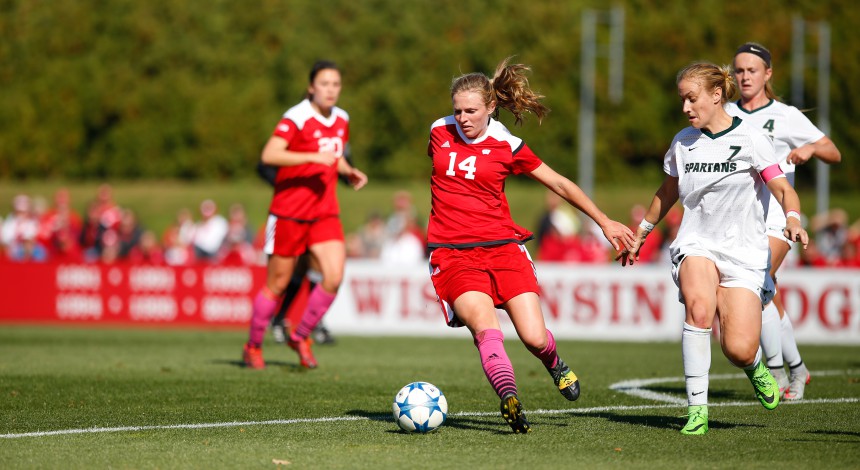 After defeating conference foe Maryland 1-0 on the road Saturday, the Wisconsin women’s soccer team guaranteed a share of its first Big Ten regular season title since 1994.

Wisconsin (11-4-3, 8-1-1 Big Ten) bested the Terrapins after junior midfielder Micaela Powers netted the only goal of the match in the 81st minute.

Head coach Paula Wilkins pointed to consistency as the key to her team’s continued success.

“Consistent in being able to play together as a team,” Wilkins said. “[That is] truly a team success. To win at least a share of the league … that’s consistency over a long period of time, and I was more proud of that than anything.”

But for almost the entirety of Saturday’s matchup, the only consistencies were the two zeros on the scoreboard.

Despite her best attempts to maintain the façade of her confidence in the Badgers during the match, Wilkins eventually gave a lighthearted admission of a more genuine level of concern before Powers scored.

Wilkins had prepared her team for a situation like this before and alluded to the nature of an unpredictable sport such as soccer.

“We have talked about how someone has to be special,” Wilkins said. “It was Micaela this time.”

Wilkins said she felt as though Wisconsin had a true defining moment following a 4-0 stumble to Penn State in its conference opener.

“After the result against Penn State I told the team that you have to decide what team you want to be, and need to be,” Wilkins said. “It also took some pressure off of them, they started playing and focusing one game at a time.”

This one-game-at-a-time mentality has slowly transformed into a one-win-at-a-time reality.

Rolling out an eighth straight victory Saturday, the Badgers are not only tied for first place in the Big Ten, but they also matched the program’s longest winning streak since 1987.

In spite of the cause for festivities, Wilkins left no room for smiles or laughs when it came to the team’s current goals, noting that the season is far from over.

Wisconsin only needs a tie or a win over Northwestern to be crowned sole Big Ten regular season champions. The Badgers have placed added significance on the match as they get set to host Northwestern (12-4-2, 6-3-1) in their season finale Wednesday night at 7 p.m. in the McClimon Soccer Complex.

With the seriousness of the match in mind, Wilkins ended with a confident boast.

“There is a belief now, and that belief is something that you can’t coach. It is just experience that they have,” Wilkins said.