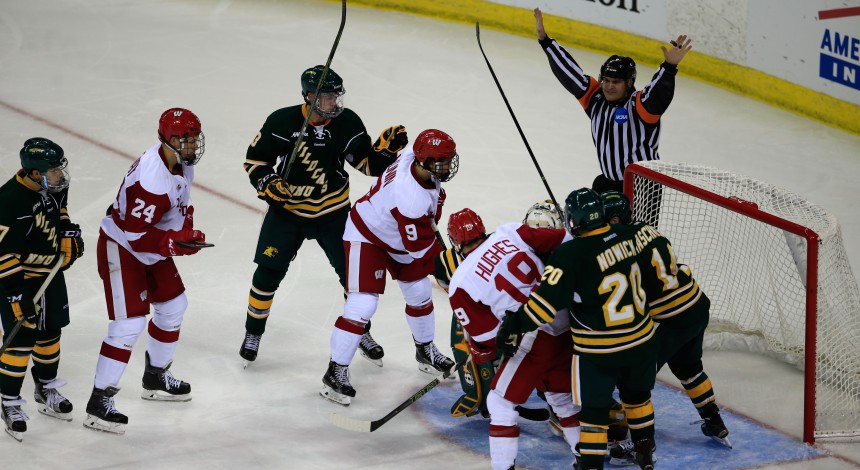 The scoring came early and often over the weekend in New England, but it was much to the chagrin of the Wisconsin men’s hockey team as they fell to both Boston College and Boston University.

Boston College established the tone early Friday night, opening the action with a goal 12 seconds into the contest. The Badgers didn’t find the back of the net and suffered their first shutout of the 2015-16 campaign.

Maybe the most interesting subplot of the weekend was head coach Mike Eaves’ decision to pull senior goaltender Adam Miller in favor of freshman Matt Jurusik, with the Badgers trailing 2-0 in the first period Friday night. Jurusik would go on to stop 40 shots on goal against Boston University Saturday, the most by a Wisconsin rookie since 2001.

Eaves gave his rookie goaltender a vote of confidence at his weekly news conference Monday.

“We lost the game, but there were several things that stood out, and that was one of them,” Eaves said. “You know, that’s the kind of growth that we’re hoping to find with our young group as we get going, so because of that fact, you know, we go into this weekend knowing Friday night that young Matty is going to be our goaltender.”

“I thought our guys did a really good job,” Eaves said. “The blessing of having all those penalty kills is we got a chance to work on it live and in game situation, which is the best teacher so we did a lot of good things there, and we will be able to use that as we move forward as well.”

UW will look to build upon the small successes from their New England trip when they face off against the Ferris State Bulldogs in a weekend showdown this Friday and Saturday in Big Rapids, Michigan.