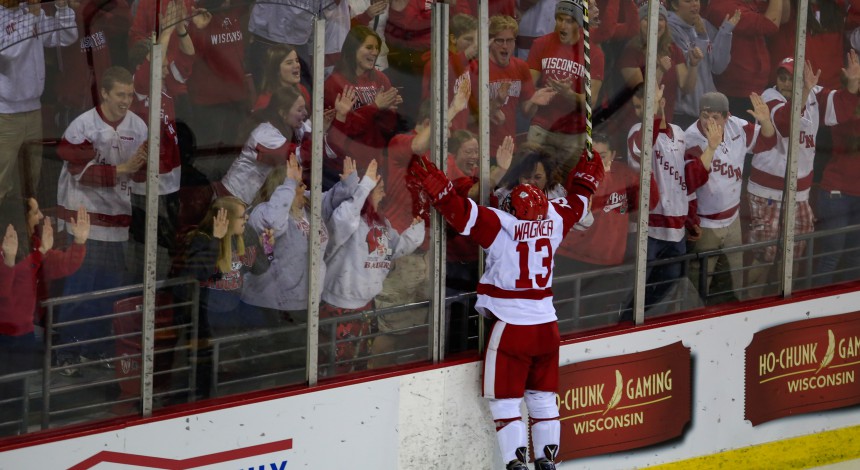 It would have been supremely easy for the Wisconsin men’s hockey team to fold Saturday night at the Kohl Center.

Facing a daunting 3-0 hole heading into the third period against Northern Michigan, the Badgers stormed back with a barrage of three goals in less than three minutes, overcoming their largest deficit in a game since the 2013 season. The 3-3 tie would hold into the overtime period as both teams battled to a draw for the second time in the weekend series.

For the Badgers (0-0-2), the opening series was a promising start coming off a disappointing 2014-15 campaign, head coach Mike Eaves said Monday. He added he was optimistic about his team’s start, but saw areas that should be addressed.

“We can be better, I know that’s something Friday night to Saturday night we were much improved, but our play in the offensive zone can improve,” Eaves said. “[The offense] got better. We are actually going to focus on it a little bit and see if we can shore that up and be more productive and more effective in that area of our game.”

UW took an unorthodox approach to the tilts against the Wildcats, alternating between two different goaltenders — senior Adam Miller and freshman Matt Jurusik. Eaves saw both good and bad from the pair.

“It looked like in the first period that Adam didn’t want to get out and stop any pucks, and for Matt, he seemed to be playing deep in the net in that first period,” Eaves said. “As the game went on, they both made excellent saves and Matt showed a really good ability to handle the puck and make good decisions with the puck once he went back and stopped it, so they both got comfortable the more they played.”

The Badgers will take their hodgepodge approach to New England this weekend as they square off against No. 4 Boston College and No. 6 Boston University at 6 p.m. Friday and Saturday night, respectively. Eaves said he’s excited about the prospect of his players gaining experience away from home.

“We can learn lots,” Eaves said. “I think you’re trying to grow together as a team, and we took a step in that direction this weekend. Now we go on the road in somebody else’s backyard and how we play, being up against it, all those type of things.”