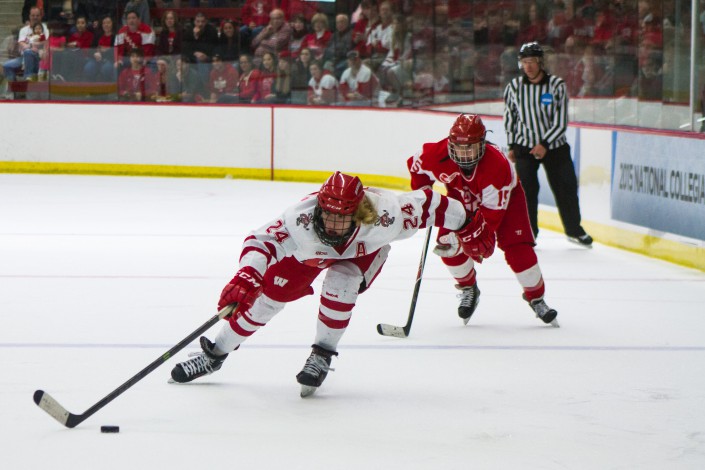 University of Wisconsin looks to continue momentum coming off the weekend romp of Providence.

The cross-country weekend voyage to San Jose, California was a resounding success for the Wisconsin women’s hockey team, as they bested Providence both Friday and Saturday by scores of 5-1 and 8-1, respectively.

The No. 3 Badgers outshot the Friars 41-11 Saturday and dominated almost every other statistical category.

The trip was especially fruitful for sophomore and Laguna Hills, California native Annie Pankowski, who set the tone for Saturday’s contest with a power play goal in the game’s opening minutes. Pankowski would meet the net two more times Saturday, picking up her third career hat trick.

Five other Badgers joined Pankowski in the fun, including freshmen Sam Cogan and Sophia Shaver, both netting their first ever goals at the collegiate level.

The Badgers elicited goals from five different players Saturday, much to the delight of head coach Mark Johnson.

“l liked the tempo and the speed that we played at today coming off of last night’s game,” Johnson said after the game. “You can tell that the kids spent a lot of time this summer with their conditioning and it paid off.”

The Badgers remained in California until late Sunday, teaming up with Providence to put on a youth clinic for young girls in the neighboring areas. The Badger’s flew back late Sunday and Johnson, at his weekly Monday news conference in Madison, was happy with the trip west and the resulting exposure it might bring to the sport.

“For a lot of people it’s the first time a lot of people got a chance to see women’s hockey at the college level, and again, it’s an eye opener, and there might be five, six, eight, 10 kids that we touched yesterday, and our players had a chance to work with, that maybe set in the back of their mind that, ‘Hey, someday I want to play college hockey,’” Johnson said.

UW looks to continue the positive momentum from the weekend as they are slated to open WCHA play against Ohio State. The series — starting Saturday at 2 p.m. — will be an early season showcase for two undefeated rivals. Adding fuel to the fire, the Big Ten network will air Saturday’s contest.

Johnson embraced the early season exposure for his team Monday.

“With Ohio State coming in, obviously with league games, exposure for our sport is always important,” Johnson said. “And Sunday afternoon the Big Ten Network will televise our game, so I know the players will be excited.”