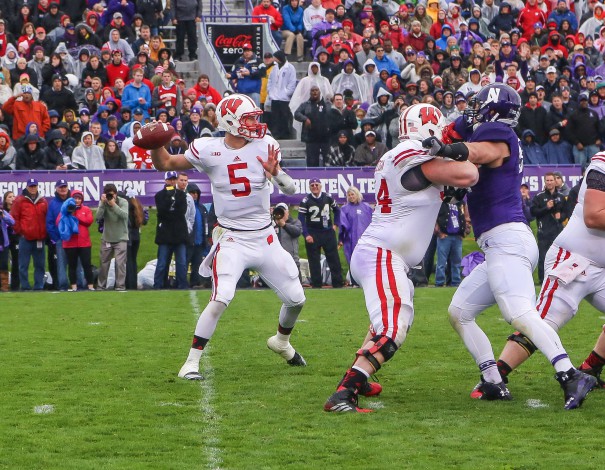 In the grand scheme of things, the Wisconsin football team’s spring game Saturday is just a glorified practice.

But there will still be plenty on the line as the limelight shines on the Badgers for the first time leading up to the fall season.

With an influx of younger players, including several talented early enrollees, some players have more to prove come Saturday than others.

Here’s who The Badger Herald sports department is keeping an eye on for the spring game, as players who could stand to gain or lose ground based on their performances Saturday.

Stave has had a whirlwind experience at quarterback since he first arrived on campus in the spring of 2011, and his starting spot looks like it could be under siege for the second straight season. Stave looks to be in line as the first string signal caller come next fall, but there are several other viable options behind him should his throwing issues from last season resurface.

That’s not to say Stave has to have a breakout performance Saturday, but if he’s going to retain the top spot, he has to prove to new head coach Paul Chryst that he can be a reliable and efficient option under center. He’s shown he can throw the deep ball, but can he complete the short throws?

Speaking of threats to Stave, DJ Gillins might be the most likely candidate to do that. After sitting out last season, the redshirt freshman has spent most of his time this spring with the second team offense and has shown some flashes of what made him a four-star recruit out of high school. If he showcases his dual-threat abilities Saturday, he could make a serious case to be in the starting quarterback conversation.

With several injuries ahead of him, redshirt freshman Jazz Peavy has seen increased time as part of the wide receiving corps this spring. Outside of Alex Erickson, who came on strong for UW last season, the Badgers don’t have too many proven threats at receiver, making the increased time for Peavy that much more valuable. The spring game will be yet another chance to prove he belongs in the top group.

Another #Badgers player to watch is WR Jazz Peavy. Getting reps with Wheelwright out and has flashed.

Deal is yet another of the redshirt freshmen making gains, as he has his sights set on the number two running back spot behind Corey Clement.

UW RBs coach John Settle said Taiwan Deal has closed the gap on Dare Ogunbowale for the No. 2 spot behind Corey Clement.

Deal certainly has the ability to be a top tier running back in a program known for turning out elite rushers. He ran for 1,200 yards and 18 touchdowns as a senior and finished with more than 3,100 yards in his high school career, as the 2013 Maryland Gatorade Player of the Year.

Shelton struggled through his sophomore season and finished without an interception after he had four his freshman year. But the junior has bounced back so far this spring, and has said the new coaching staff has helped give him renewed confidence. Saturday will provide him the opportunity to show what he can do in a pseudo-game situation.

Unlike last spring, McEvoy will not competing for a starting quarterback spot come Saturday. However, the question remains where exactly McEvoy will be used and how much he will be used. Most of his time has been spent at safety, where he will most likely start this fall, and his 6-foot-6 frame will give much needed size to UW’s secondary. He also could see some time at wide receiver where he has already made an impact in several practices.

#Badgers McEvoy got lots of work at WR today. Had a 20-yard TD catch in RZ segment.

Edwards has come on strong this spring, and the redshirt freshman has put himself into a position where he could potentially earn a starting spot at inside linebacker. Edwards was a three-star recruit in high school and played both offense and defense, but has focused in on his defense capabilities this spring, where he has spent a good deal of time with the first defensive unit. Saturday could help solidify his standing with that first unit.

ILB T.J. Edwards primed to breakout in 2015. Had another huge day for the No. 1 defense. #Badgers

Obasih played right away as a freshman a year ago and will be a key cog in the Wisconsin defensive front this year. With Warren Herring graduated, Obasih will be have to step up as one of the leaders of UW’s front seven, which also lost both inside linebackers in Marcus Trotter and Derek Landisch to graduation. A year older, Obasih will have more playing time and more responsibility come fall.