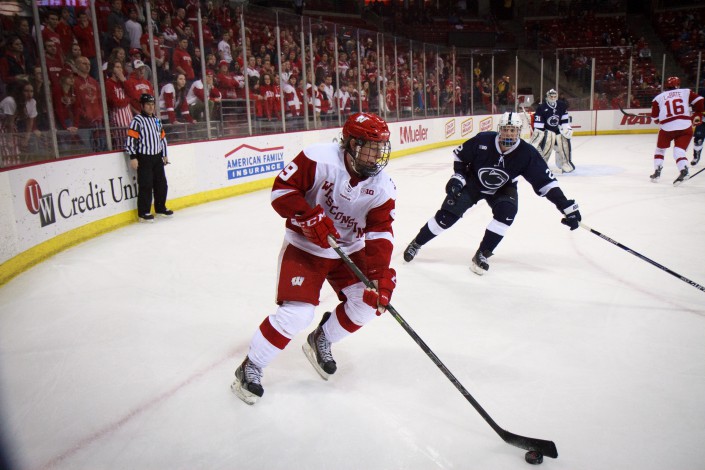 The off-season turnover continues for the Wisconsin men’s hockey team.

Instead, Zulinick will move back to Canada to be with his family, including his three-year-old son, Noah.

“I’ve decided after three years here at Wisconsin, my heart is back home with my family and my son, Noah,” Zulinick said in a statement issued Friday. “I’ve found my desire to be back home with Noah outweighs my desire to continue on playing hockey. I think I really need this.”

With six seniors graduating from this year’s squad and only two juniors who have seen regular playing time in their careers, Zulinick was poised to be one of the key players on next year’s team. He had appeared in 74 games during his Wisconsin career, including 36 this past season, which would have been the third-most career contests among returning letterwinners behind junior defensemen Kevin Schulze and Eddie Wittchow.

Eaves knew it wasn’t an easy decision for Zulinick, who had previously brought up concerns about not being with his son.

“He talked about the decision process and it sounds like it was a pretty thorough one,” Eaves said. “It has been on his heart for a while. What he shared was that when he was home over spring break with his mom and dad and extended family that he holds in his inner circle, they poked holes at all things, but in the end it was his need to get back and be with Noah.”

Besides losing one of their more experienced players, the Badgers will also lose one of their biggest sources of offense. That’s a considerable blow to an attack that struggled mightily this past season, averaging just 1.7 goals per game, which was the fourth lowest average in all of college hockey.

Despite the lackluster offense, Zulinick was one of the lone bright spots. He was third in scoring this past season for University of Wisconsin, tallying a career-high five goals while adding 10 assists.

According to Eaves, some of the best he saw Zulinick play all year was over winter break while his family was in town. That included a stretch of eight straight games with a point from late November all the way to January 16 against Minnesota. Coincidentally, four of Zulinick’s five goals came in a four game stretch from Dec. 5 to Jan. 3. His four game goal streak was the longest for any Badger player this season.

Zulinick had nine goals and 24 assists for 33 total career points.

He also shared the news of his departure with his teammates, all of whom were aware of his situation.

“I’ve talked to my roommates and a couple other of my teammates, so word has gotten around,” Zulinick said. “Some of the guys have asked me about it, and I told them, and asked them what they thought and what they would do. They have been unbelievable with their support. A lot of them said they don’t know how I’ve been doing it. Every one of them has met Noah.”

According to the statement, Zulinick will finish out the rest of the spring semester at UW so that he will not have any difficulties transferring. He said that he has already applied to several schools and is waiting to hear back from them.

The news of Zulinick leaving comes on the heels of Wisconsin’s worst season in program history that saw the Badgers go 4-26-5, setting the school record for most losses and fewest wins.

Coupled with the loss of Zulinick, the rebuilding process going forward will become more difficult.

“As hard as it is from a hockey standpoint – he would have been a leader on our team next year – it is the right decision for Morgan at this time and we wish him well,” Eaves said. “He is a terrific young man.”