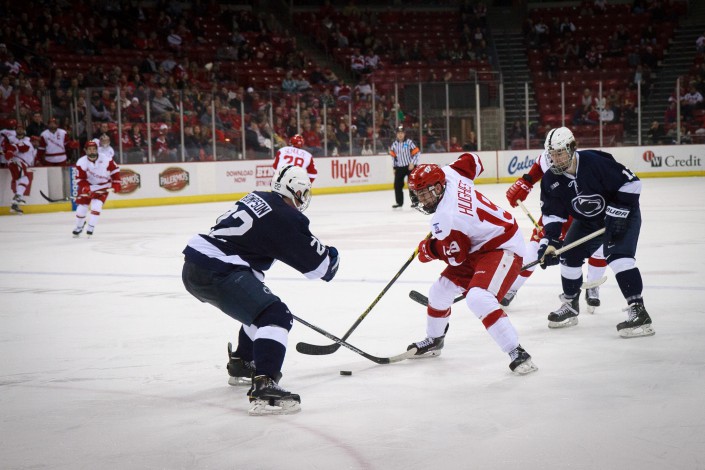 Wisconsin men’s basketball, I’m really happy for you and I’m going to let you finish, but I just wanted to say that the Wisconsin men’s hockey team just disappeared into irrelevance.

In case you’re still hungover from earlier this week and missed the news — or more likely, in case you couldn’t care less about a Badgers hockey team that just finished the worst season in program history — UW men’s hockey head coach Mike Eaves fired both of his assistants Tuesday.

It’s astonishing news, I know, considering Wisconsin won just four games this year — yes, that’s two plus two — and lost 26. Something had to give after this season, which looked less like a hockey program and more like a 26-car pileup that just kept adding more diesel tankers careering into the wreck at top speed for six months. But that wasn’t the something that most people had in mind.

Instead, most people thought that Eaves was going to be the one getting the boot to the fanny, as he would put it.

But two days after the dumpster fire finally got extinguished and the season ended, Wisconsin athletic director Barry Alvarez told the Wisconsin State Journal that he was comfortable saying Eaves would return as head coach next season. However, there was one catch: things had to be torn apart and the problem had to be fixed.

But instead of just gently sifting through the evidence to find some solutions, Alvarez poured gasoline on the Kohl Center, lit it on fire and chartered a jet back to his Camp Randall office.

The first problem in this whole travesty is that it took Alvarez a month to meet formally with Eaves. Sure, there were a lot of basketball games to attend over the last month, but he should have made time to meet with Eaves after the most embarrassing season in school history and discuss some potential fixes.

Most people might not care about hockey, but it’s still a revenue generating sport — although probably not for much longer — and there are still almost 8,000 season ticket holders, or at least there used to be. Alvarez’s non-action shows how he feels about the sport. Can you imagine if basketball went 4-26? Madison would be burning under the fiery rage of Alvarez right about now.

But the real issue here is that Eaves now looks like a scapegoat. He said near the end of March that he was planning on keeping both Gary Shuchuk and Matt Walsh on the staff for next season. It wouldn’t make much sense for him to come out and lock in a decision like that to all of a sudden go in the opposite direction.

But that’s what happened. There could be a couple of reasons why, but the most likely one is that Alvarez forced Eaves to pick between his job and his assistants’ jobs.

It doesn’t matter what the reason is though. Regardless of what took place during the talk between Eaves and Alvarez, Eaves had to let go both of his assistants. He might have tried to save their jobs, but now he looks like he’s throwing them out in the wreck, blaming them for causing it even though he’s the one in charge.

It might be a temporary solution to start anew, but don’t think that will stop the horrific crash of Wisconsin hockey. In fact, a 26-car pile up will seem like a not-so-terrible alternative compared to the danger looming on the horizon.

Then there’s the fact that Wisconsin just lost Shuchuk, who’s in charge of recruiting. UW has a good freshmen class coming in next season, including one of the best overall goaltenders. But it’d be unrealistic to expect that Wisconsin will retain all of its recruits with Shuchuk gone.

More importantly than that, recruiting down the road will become an uphill climb with what’s taken place in the last year and a program that seems to be getting lost as it ages.

Wisconsin already lost out on one of the best recruits this year in Brock Boeser, who changed his commitment from Wisconsin to North Dakota when he saw the train in its earliest stages of derailment. He’ll probably be the first of many to change his mind in the coming years.

But even if Wisconsin manages to make it out of this wreck and return somewhat to previous form, it won’t matter. The attendance numbers in the last several years tell you all you need to know. The sport that used to be the crown jewel of the athletic department is now one that people just scoff at.

It might be partially the assistants’ faults for not fulfilling their roles as best they could. It might have a lot to do with Eaves’ defensive-minded teams and sporadic recruiting classes.

But the real problem is that Alvarez won’t make meaningful changes to the program, because in the end it doesn’t seem to mean much to him.

Until it does, let’s just go watch basketball.

Dan is a junior majoring in journalism. Do you think firing both assistants was the right move for Wisconsin? Let Dan know by emailing him at [email protected] or tweeting him @DanCoco7.