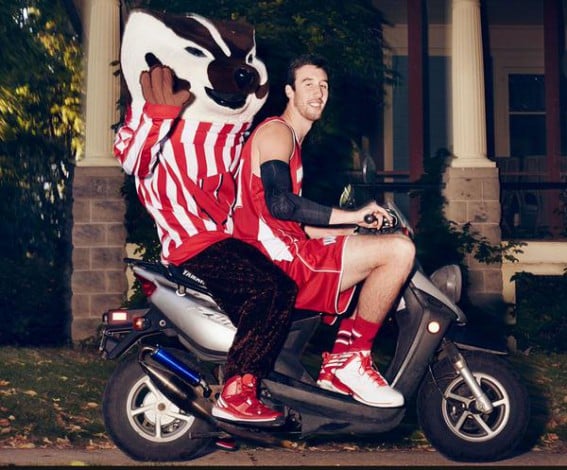 Monday night’s loss to Duke in the National Championship is something most Badgers fans would like to forget right now.

But even though the Wisconsin men’s basketball team came up short of its goal of a National Title, there were still plenty of other memorable moments throughout the thrill ride of a season.

That season featured a school-record 36 wins, back-to-back Final Four appearances for the first time in program history and plenty of selfies of course.

Back in Madison.
Hope you all enjoyed this amazing season as much as we did.#MadeEmBelieve pic.twitter.com/g2u6fE0Z8m

Not to mention a tank full of highlights.

That included one of the biggest wins since UW began playing hoops in 1898-1899, when the Badgers took down the previously undefeated Kentucky Saturday night in Indianapolis.

Included in those highlights are four seniors who played in their final game as a Badger Monday night and a junior in Sam Dekker who very well might have donned the Cardinal and White for the last time, as well.

They took to Twitter after the tough defeat to offer up their thanks to everyone in Badger nation.

What a crazy ride. Thank you teammates, coaches, family, and fans for the greatest 5 years of my life. Hope you enjoyed it as much as I did

Never been more proud of a group in my entire life. What we achieved will never be taken away from us. Thank you for having me @UWMadison

Thanks to @UWMadison for the opportunity of a lifetime that allowed me to play a sport I love and build a bond with brothers I never had!

The unprecedented campaign all started Nov. 14 with a sellout, a new banner raised to the rafters and win number one.

But not everything was going up.

Some things came down along the way, including another couple of nets for head coach Bo Ryan.

That moment when you know you're going back to the #FinalFour. #Badgers pic.twitter.com/KZ2PjJrJek

All the big accomplishments meant there were a lot of celebrations along the way.

And other smaller, more intimate moments.

Sometimes it was tough to find the right words to describe all the crazy situations. Luckily, Wisconsin had the sesquipedalian vocabulary of sophomore forward Nigel Hayes — and one stenographer who was up to the task.

But seriously – have you ever seen the magical powers of a stenographer? pic.twitter.com/36exonv2CG

Other times, it was better to let the pictures do the talking.

Before we leave for Indy, take a look a the #Badgers' Road to the Final Four: http://t.co/QQ93CB3SOB

Some of those images seemed vaguely familiar, like beating Arizona in California to go to the Final Four.

Last night was no dream.
"The Wisconsin #Badgers move on to Indianapolis. They will RETURN to the Final Four!" http://t.co/o6PtUUU6f1

Probably about half the season involved Sam Dekker dunking on some hapless opponent.

Or the Nittany Lions.

When Slammin’ Sammy wasn’t throwing down, Frank the Tank was there to pick up the slack.

But Frank wasn’t always ripping down rims. He was more gentle other times, although he was still making his defensive assignments look silly.

This is why #Badgers 7-footer Frank Kaminsky is a preseason All-American. https://t.co/pXCqDxE0vg

That belonged to Dukan.

Some other plays didn’t go as well. Luckily, this one happened after Wisconsin had already won.

You always have to keep your head on a swivel.

And this one doesn’t really fit in anywhere, but it needed to be included.

Happy birthday to Bo Ryan!
What do you think… "Birthday suit" for the Cal game? pic.twitter.com/ASg7aX9dNO

And because the 2014-15 season was the year of the Tank, here’s more of Frank’s finest moments.

There's dropping the mic, and then there's @samdek1 http://t.co/Hgt1vgXeDC #Badgers

Just kidding, Frank’s back for more.