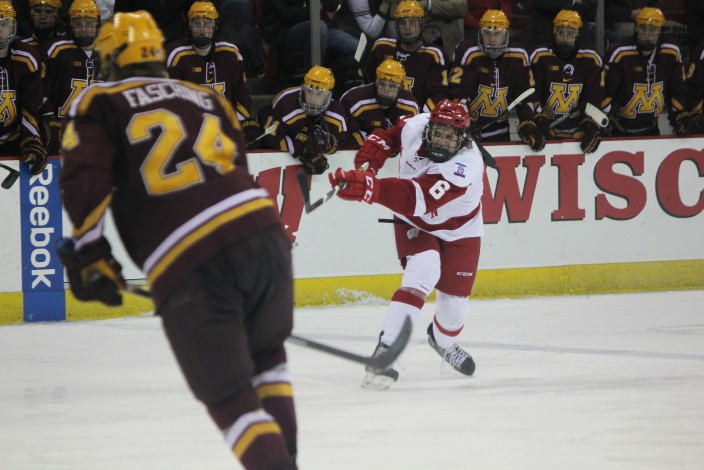 The Wisconsin men’s hockey team will get a chance to salvage the worst regular season in program history this weekend, but it’s going to have to nearly double its total wins.

But despite the tall task of winning out, head coach Mike Eaves is optimistic about his team’s improvement in the second half of the season heading into the conference tournament.

“It’s a brand new start. It’s a beginning, and I think it raises that thought of hope for us,” Eaves said. “We have, in the second half, talked about playing our best hockey coming into March, and we have done that.”

However, Wisconsin opens with Michigan Thursday night, a team it has yet to beat this season in four games. In the first series with the Wolverines, UW jumped out to a 4-1 lead early on in the second period, but ended up allowing six straight goals in a 7-4 loss. After those first four goals in the first game, the Wolverines ended up outscoring the Badgers 20-2 in the final three and a half games.

The road trip to Michigan featured slightly closer games, but still resulted in 3-0 and 5-2 Michigan wins.

“They lead the country in offense, and we saw that firsthand here,” Eaves said. “We played them much tighter in their building. Even Red complimented our team [on] how the second series was closer.”

After two conference tournament championships the last two seasons for Wisconsin, the Badgers will have to start fast if they hope to reclaim a tournament crown for the third straight year.

Wisconsin will also have to do it in a different venue, as this year’s Big Ten tournament will take place at Joe Louis Arena in Detroit, following 14 straight years for the Badgers at the Xcel Energy Center in St. Paul.

“The next time the tournament comes up to go to Detroit, that arena won’t be there,” Eaves said of the only opportunity to play in the historic NHL barn. “They are building a new arena for the Detroit Red Wings, and this arena, excuse the pun, but it reeks of history, like spilled beer and cigarettes and championships gone by.”

Should Wisconsin win in the first game against Michigan, it would take on Michigan State in the semifinals. The Badgers did manage one win against the Spartans this season, but then got swept in the final three games against MSU, all by a score of 3-0.  Spartans’ goaltender Jake Hildebrand has keyed the Spartans’ success this season, with the second-most shutouts in the country (6) and the ninth-best save percentage (93.0).

Goaltending could also be a key to Wisconsin’s success in the tournament. UW has relied heavily on Joel Rumpel throughout the season, and despite less than average numbers compared to the rest of his career, Rumpel has kept Wisconsin in most games. Despite allowing the fifth most goals per game in the country as a team, Rumpel still has managed a .904 save percentage.

But considering Wisconsin is the fourth-worst offense in the country, the Badgers’ attack will have to support Rumpel to keep the season on life support.

“Hope is a great thing,” Eaves said. “This time of year, how many Cinderella stories have been written in March through basketball or hockey? We will find out together if we can write one of those stories again.”

Who: Wisconsin vs. Michigan State

When: Thursday, 7 p.m. Televised on the Big Ten Network.