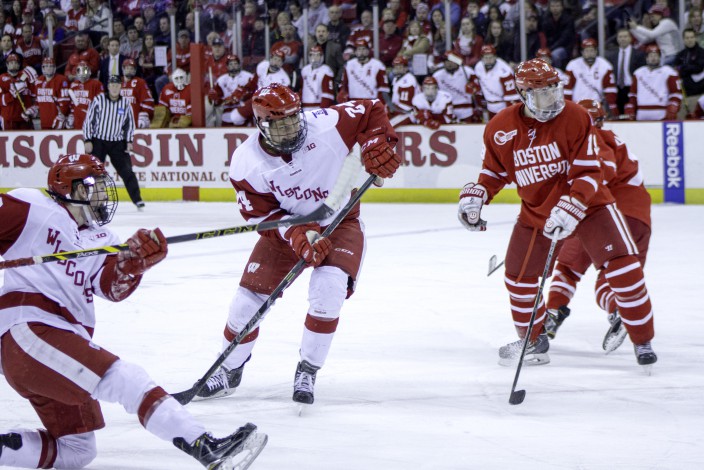 In a season filled with struggles, the Badgers came up empty-handed yet again, this time by way of a 2-0 defeat against Ohio State at the Kohl Center in the final regular season game of the year.

The defeat pushed the Badgers to their 25th loss of the 2014-15 campaign, surpassing the 24 losses of the 1975-76 Badger squad, which was the previous high for most setbacks in one season.

Wisconsin head coach Mike Eaves said he liked the effort of his players Saturday night, but that didn’t translate into the desired outcome.

“There’s not one young man in that locker room that didn’t want to play really well tonight,” Eaves said. “But it just didn’t happen.”

Not surprisingly as the third lowest scoring team in the nation, Wisconsin (4-25-5, 2-15-3-2 Big Ten) failed to find the back of the net and got shut out for the fifth time in the last seven games.

But Ohio State (13-18-3, 8-11-1-1) couldn’t solve Joel Rumpel either, and the teams remained scoreless almost until the halfway point of the tilt. But before the teams reached that halfway mark, OSU struck for the only goal it needed. OSU’s David Gust slid a backhanded centering feed to the front of the net, and Tyler Lundey slammed the pack into a vacated net with Rumpel down and out to give the Buckeyes a 1-0 lead 8:54 into the second.

Although that proved the pivotal score, Eaves said the turning point of the game came when UW’s Cameron Hughes sustained an upper body injury. Jedd Soleway had trouble getting into the bench after he had gotten hurt earlier in the sequence, and when Hughes skated by the bench with the puck, he got slammed hard into the open door. Hughes left the game with an undisclosed injury and did not return, although Soleway did return to the game.

“I thought he broke his arm,” Eaves said. “The anguish in his face was pretty good and that just was typical of the night.”

Already down a goal and one player, Wisconsin lost senior Matt Paape with less than five minutes to go in the second period when he took a five-minute major and a game misconduct for a check from behind.

The Buckeyes couldn’t score on the subsequent extended man advantage, but the Wisconsin offense continued its own struggles after it got back to even strength.

The Badgers managed just 17 total shots in the game, the sixth time this season they have failed to record at least 20. According to Eaves, Rumpel was the big reason Wisconsin managed to even stay in the game, as the senior stopped 32 of 34 shots in the final two periods in his last home game.

Ohio State would tack on an insurance goal with a little less than 10 minutes to play when Matthew Weis zipped a shot past Rumpel from the left wing on a sharp angle.

But despite yet another loss this year, Rumpel and the rest of the Badgers remained optimistic after the game, with their eye on the team they will meet in the first game of the Big Ten tournament next Thursday.

“They better watch out,” Rumpel said.

Wisconsin will take on third-seeded Michigan Thursday in Detroit in the first round of the conference tournament.

The Wisconsin men’s hockey team played the second 30 minutes of Friday night’s game against Ohio State like there was no tomorrow after it was nowhere to be found in the first half of the series-opening contest.

But after falling down a goal twice in game one of their last home stand of the season, the Badgers never quit against Ohio State, battling the Buckeyes to a 2-2 draw and a shootout that OSU won in the tenth round.

Both teams got out to a slow start in the first period, especially the Badgers, who registered only six shots on goal in the first 20 minutes.  Fortunately, Wisconsin goaltender Landon Peterson, who started in place of the usual starter Rumpel, played well to keep the game scoreless heading into the second.

While the Badgers finished strong, Eaves was unhappy with how his team came out to start the game.

“It becomes a balance act. For a period and a half, we were disappointed,” Eaves said. “We looked distracted. We didn’t look like we were ready to play in the first period.”

“We had guys who didn’t show up until halfway through the game,” Navin said.

The weekend was also Wisconsin’s senior weekend, which Eaves said may have distracted his team a bit at the start of the game.

Wisconsin’s play improved in the second period, but that did not prevent the Buckeyes from taking the lead 13 minutes into the period. Lundey scored on a rebound to give the Buckeyes a one goal lead that they would take into the final period.

Wisconsin seniors Navin and Peterson made their senior weekends memorable in the final period. Three minutes in, Navin connected on a power play goal to tie the game and snap Wisconsin’s 183-minute goal drought. After an Ohio State goal put the Buckeyes ahead again, Navin tied it up again for the Badgers with 3:57 to play, giving him a two-goal game.  Peterson may have been the biggest hero of the night, making a brilliant save on an Ohio State breakaway that came with just more than a minute left in the game.

After a scoreless overtime, Ohio State prevailed in a shootout that does not count toward the teams’ NCAA records, but gives the Buckeyes an extra point in the Big Ten standings.