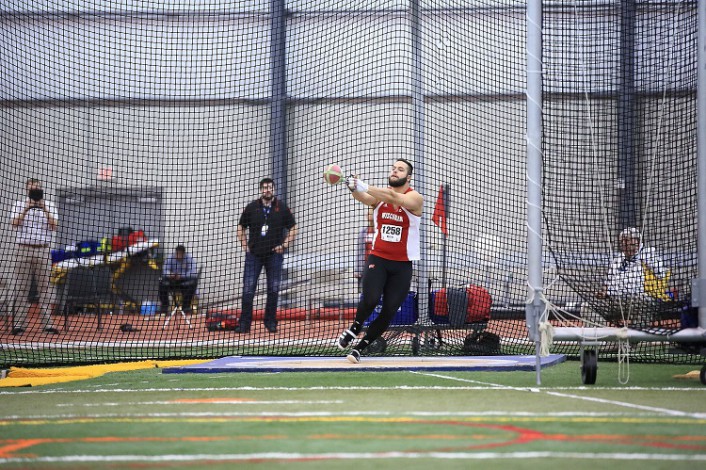 Michael Lihrman lost 80 pounds his junior year of high school and took on track and field to keep up a healthy lifestyle.

Six years later, he’s on the verge of a world record, but he’s not even done yet.

“I like to snatch up records,” Lihrman said. “I only have a couple more to break: I’ve got the world record and I’ve got the NCAA meet record. I missed that last year by a couple of feet, so two more records, and I’ll hold them all.”

The senior thrower for the Wisconsin men’s track and field team has broken the school record for a weight toss five times, won two Big Ten individual championships in the weight throw and won an individual NCAA championship in the same event.

Lihrman, who redshirted the 2013 spring season, also has the collegiate, Division I and Big Ten records for the weight throw and a Big Ten and school record for the outdoor track season in the hammer throw.

But his journey to success didn’t take place overnight.

After high school, Lihrman spent his first two years at UW-Stout while pursuing a degree in hospitality and restaurant management to continue in the family business. At the same time, he continued to compete in track and managed to have a fair amount of success, placing in the top 15 in Division III outdoor meet his first season.

But according to Wisconsin assistant coach Dave Astrauskas, the jump Lihrman made to Division I after his sophomore year was hardly typical.

“It doesn’t normally happen,” Astrauskas said. “There’s a big discrepancy between the talent levels between Division III and Division I.”

Lihrman focused more on throwing after his freshman year at Stout, finding a coach near his home of Rice Lake, Wisconsin, to help him improve. The coach pushed him to try to make the jump to Division I, but Lihrman wasn’t quite at the Division I standard at that point.

Following his sophomore season, when he finished fourth in DIII in the hammer throw during the outdoor campaign, Lihrman met the DI standard and requested his release papers from Stout to transfer to UW-Madison.

“I remember meeting the athletic director there, and he told me you can stay here and continue to be good or you can go to the Division I level and be just OK,” Lihrman said.

Although he may have lacked throwing experience at the time of his transfer, he left a strong first impression on the staff at Wisconsin, including Astrauskas, who coaches the throws.

“After I saw him here whenever he visited, saw his size, I thought, ‘Wow, we have a special thrower here,’” Astrauskas said.

But Astrauskas and even Lihrman himself couldn’t have anticipated what was to come in the following three years.

“As a coach, it’s tough to ever expect someone to be the best there ever was in the NCAA. I definitely didn’t see that,” Astrauskas said. “I saw him being somebody that could make it the national meet a couple times for us.”

But then the breakthrough came for Lihrman after his fall season, when Astrauskas knew that there was something big on the horizon.

“We were just kind of getting back into weight throwing after throwing the hammer all fall and he’s throwing the weight. I thought he was throwing the 30-pound weight and he was actually throwing with the 35,” Astrauskas said. “And I screamed as loud as I possibly could. I’m sure Michael remembers that. And that’s when I knew we had something special.”

He started slowly in his redshirt campaign, competing unattached in several meets for Wisconsin during the indoor season. Then in the USA championships in early March of 2013, he broke the school record with a toss of 20.87 meters.

After his redshirt season, when he began to officially compete for Wisconsin, the records have continued to fall. His current record for the weight throw stands at 25.58 meters, but that’s taken a lot of individual breakthroughs, according to Lihrman, which he said happen every couple of months.

“It’s a sport that you have to perfect,” Lihrman said. “You have to repeat it over and over again. You’re never going to hit perfect, but it takes tens of thousands of throws.”

On the heels of a second straight Big Ten individual title in the weight throw two weekends ago, Lihrman heads to the NCAA championships this weekend looking to reclaim his weight throw title from a year ago and set the NCAA meet record, which currently stands at 24.02 meters.

Lihrman can’t get the world record until the outdoor season, but that doesn’t mean he can’t break his own record again this weekend and set another one in the process.

Lihrman and the Badgers won the NCAA meet as a team last season, but the chance to get back to the top again individually and set another record after he came up less than a meter short a year ago gives him a chance to validate his effort over the last 12 months.

“It’s kind of like a second opportunity to win at something,” Lihrman said of competing in an individual event like the throws inside of a team sport. “It’s cool to have both, but it’s cooler, I’d say, to win on your own because it’s all on you. It’s all up to you and how much work you put into it the entire year.”

In a little less than two seasons with the Badgers, Lihrman has managed to set nearly every possible record individually. It’s something few might have expected him when he first started, but he has only continued to improve to the point where he’s chasing the world record in the outdoor hammer throw.

“I had no clue at this level, but he surprises me every day,” Astrauskas said.