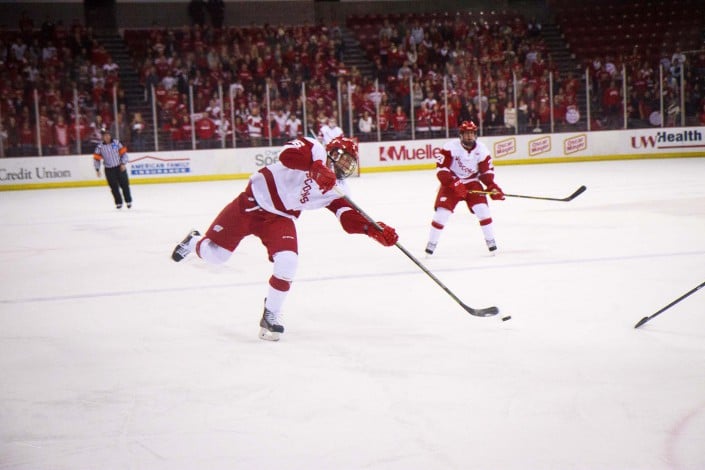 For just the fourth time this season, the University of Wisconsin men’s hockey team outshot its opponent. But yet again, it didn’t prevent a shutout.

The Badgers (4-24-4, 2-14-2-2 Big Ten) recorded a season-high 38 shots Saturday night against Michigan State, but the host Spartans scored early in the second period and never looked back on the way to a 3-0 win and their first sweep of UW since 1975.

Wisconsin head coach Mike Eaves thought his team responded well in the series finale against MSU (16-14-2, 10-6-2-2), which took over first place in the Big Ten and has won nine of their 14 home games this season.

“The kids played really well tonight,” Eaves said. “I don’t think too many teams come in here and outshoot this team and create the chances that we had.”

Despite 10 more shots on goal for Wisconsin, Michigan State’s junior goaltender Jake Hildebrand shut Wisconsin down for the second straight night, as he earned his nation-leading sixth blank slate of the season.

After MSU possessed a 10-9 advantage in shots on goal after one period of play, Wisconsin turned it on offensively with 16 second-period shots. The Badgers played without leading scorer Grant Besse Saturday night after he went down with a lower body injury in Friday night’s contest, but that didn’t stop them from generating 29 shots in the final two periods.

But with Hildebrand’s strong play and assistance from his defense, the Spartans held Wisconsin in check.

“Well his numbers speak for himself,” Eaves said. “He’s solid. He gets a lot of help from the people in front of him. They block a lot of shots for him.”

With Wisconsin in the midst of a lengthy scoring streak dating back to last Saturday’s 5-2 loss at Michigan, the Spartans needed just one goal to take care of business.

Matt Berry, who scored twice Friday night, continued to kill the Badgers, as he beat UW goaltender Landon Peterson low on his blocker side just 1:42 into the middle stanza for what proved to be the game-winning goal.

The Spartans then put the game out of reach with two back-to-back goals early on in the third period. Mackenzie MacEachern scored the Spartans third power play tally of the series four minutes into the third, and then Ryan Keller followed with his third goal against Wisconsin this season only 54 seconds later to give the Spartans their final margin of victory.

Eaves elected senior Peterson Saturday night to play between the pipes, despite the fact that he has only played in three other games this season.

“He’s been here for four years and we want to send him off playing. He’s earned it so we wanted to give him a couple of games,” Eaves said of Peterson, who recorded 25 saves in the loss.

Berry was also the hero offensively for the Spartans in Friday night’s 3-0 victory over UW.

Michael Ferrantino scored a little more than 20 minutes later at 14:25 into the second period to double the Spartan’s advantage, and then Berry scored once more on the power play just 2:25 into the third period to make it 3-0 in the Spartans favor.

However, as the game progressed, Wisconsin began to play better after getting outshot 8-1 in the opening 20 minutes. The Badgers registered 20 shots on goal in the final two periods to equal the output of Michigan State, but again Hildebrand played exceptionally in net with 21 saves Friday and stops on all 59 shots he saw during the series.

With the pair of losses against the Spartans, Wisconsin has been swept seven times this season out of 14 total two-game series.

The Badgers will try to end a five-game skid when they finish the regular season at home next weekend against Ohio State.