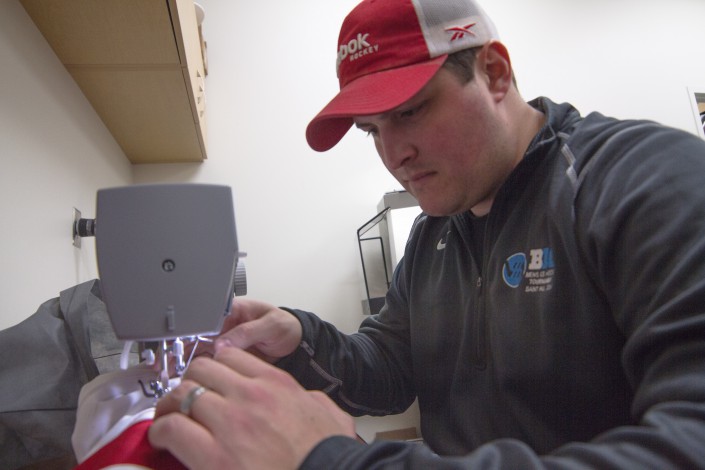 A 1-0 loss at the hands of the Minnesota-Crookston Eagles effectively ended the hockey playing careers of three Northland College skaters on February 13, 2005.

Two of those players were seniors, and the third, a sophomore.

Nate LaPoint had played in 49 of a possible 53 games in his two seasons with the Lumberjacks, but after the loss to Minnesota-Crookston, LaPoint decided it was time to move onto other endeavors.

“It always comes a time in someone’s career when they don’t want to play hockey anymore,” LaPoint said of his decision to transfer. “It was just that time for me where I still wanted to be a part of it, but I didn’t want to have to play competitively.”

Now, 10 years later, although he’s no longer on the ice, LaPoint is very much a part of the game of hockey, as the Wisconsin men’s hockey team’s equipment manager.

It started at the University of North Dakota, where he consulted men’s hockey assistant coach Brad Berry, who set LaPoint up with a job in the team’s equipment room helping out equipment manager Pat Swanson.

LaPoint began his duties as a way to stay involved with the game, even though he had never so much as watched someone sharpen a pair of skates. He began to learn the tricks of the trade from Swanson, including sharpening blades, repairing equipment and even sewing, among other duties.

By his second year, LaPoint learned that his newfound passion could be more than just a hobby.

“I didn’t know I could do it as a job at first,” LaPoint said. “It was something I thought was kind of fun to do on the side while I was getting my school work done.”

While he finished his school work, LaPoint worked as an assistant equipment manager under Swanson for all four years for the UND men’s program and continued to do more and more as his time progressed, including learning the business aspects of the job and traveling with the team on road trips.

When his time at UND was up, instead of getting a career in his field of study, he pursued a job as an equipment manager and moved from one WCHA powerhouse in Grand Forks, N.D. to another in Madison.

“I wanted to be a meteorologist. That’s what I was going to school for,” LaPoint said. “I ended up falling in love with what I do here on the equipment side of things.”

Now in his fifth season with Wisconsin, LaPoint tends to the everyday equipment needs of the Badgers players, but his duties go beyond the title of equipment manager, assistant coach Gary Shuchuk said.

“He’s more than that,” Shuchuk said. “He works his ass off.”

But LaPoint doesn’t take care of the team as a whole as much as he caters to the 26 different players and each one of their individual personalities and needs, whether it’s how they like their skates sharpened or how they want their pads to fit.

“This generation of hockey players is pretty needy, and they need certain things in certain ways,” Shuchuk said. “He never bitches about anything.”

While LaPoint’s job includes a lot of equipment maintenance, like the sharpening of skates, altering of pads and stitching up socks and uniforms, it also includes some more complex aspects, like the purchasing of equipment from goaltender pads to new sticks and maintaining relationships with the equipment suppliers, Reebok and CCM.

There are also the less glamorous parts.

“Laundry is a constant of my life. I fold a lot of towels,” LaPoint said with a laugh.

However, his less than favorite part of the job doesn’t diminish the hard work and long hours of work LaPoint puts in on the job. On road trips, he’ll typically pack all the equipment Wednesday after practice for a series that starts Friday, arriving earlier than the team so it’s ready when the players arrive.

Between the equipment duties, laundry and maintaining a clean locker room with a group of college-aged guys, LaPoint spends a lot more time at the rink than just 40 hours per week.

“It would drive me nuts if I had to deal with that all the time; he does it,” Shuchuk said. “He gives the guys a hard time ribbing-wise, but he’s a true professional. We’re lucky to have a guy like that. He cares about the program. He cares about the kids.”

During games, LaPoint occupies the bench and takes care of any equipment issues that may arise, including a few weekends ago when he had to re-stitch a uniform by hand between the second and third periods after it got sliced up the back with a pair of skates waiting to be sharpened. But unless he’s scampering to the locker room to fix a problem during a stoppage in play in the middle of a period, he’s someone who won’t draw much attention to himself.

But even though eyes might not be watching him readily, there’s a group of about 30 guys who rely on LaPoint to come through for them day-in and day-out and game-in and game-out.

“I always tell people they’re probably the most important guy you want to be with,” Shuchuk said. “They’re the guy that holds the key to the stick room, the tape, the stuff that you need. You got to treat those guys with respect.”

LaPoint might not be back on the ice playing anytime soon, but you’ll probably be able to find him somewhere nearby.

And although he might have left hockey to pursue school, he won’t be leaving hockey or his post anytime soon.

“Not right now,” LaPoint said. “This is pretty good.”