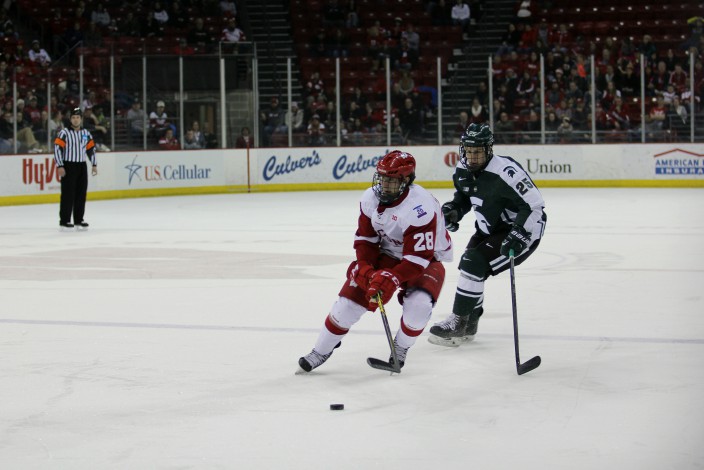 The Wisconsin men’s hockey team found itself in the midst of one of its best stretches of the season when it took to the ice to face Michigan State Saturday night at the Kohl Center.

The winning streak happened to come on the heels of an 11-game winless streak, which was also the longest of the season so far. The win had the players feeling as if they had emerged from one of the darker parts of the season, according to senior captain Chase Drake.

“We’ve had a tough stretch there and we’re picking up momentum now,” Drake said. “I think guys are excited to come to the rink. When you win, it always makes everything better, so yeah, there’s definitely a positive light for us now.”

It was short-lived, however, as the winning ways came to a halt in the series finale. The Spartans responded with a 3-0 victory. Scoring two times in the opening period. Michigan State didn’t look back, as the Wisconsin offense continued its season-long woes.

However, despite the loss, Wisconsin head coach Mike Eaves did not view the game as a step back for his team.

“I think it was more of a litmus test of where we are,” Eaves said. “We didn’t react very well to it. It kind of let us know where we stood. I just didn’t like the number of battles we lost and the fact that our skill guys didn’t react well.”

The lost battles Eaves pointed to were also what he said decided Saturday night’s affair, along with a lack of poise by Badgers’ skilled players.

Wisconsin was certainly not without chances throughout the series finale, and actually had 13 more shots than on Friday night, when it scored two times. But the lack of poise prevented Wisconsin from cashing in on scoring opportunities when it had them.

On multiple occasions throughout the night, UW had passing sequences that set a player up with a good look at the net, but either the pass was not clean or the shot didn’t find the net. When the puck did go on goal, Spartans netminder Jake Hildebrand made the stop, as he earned his fourth shutout of the season for Michigan State with 31 total saves.

While Wisconsin couldn’t win the small battles and had trouble finishing the plays, Michigan State had all three of its goals come after beating the Badgers to the puck. The Spartans’ first tally in the first period resulted from a series of rebounds in front of Wisconsin goaltender Joel Rumpel that his defense couldn’t clear. Michigan State’s final two goals came by way of Spartan players securing the puck along the end boards and feeding a player in front of the net.

“It was evident that they were playing with a little burr in their bonnet that was a little bit bigger than ours,” Eaves said. “They won more races, more battles.”

The Wisconsin offense didn’t just struggle at even strength and had a great deal of difficulty on the power play, going 0-5 through the course of Saturday night. Including a power-play goal at Ohio State last Saturday night, Wisconsin has gone just 1-17 on the man advantage over the course of the last three weekends.

The Badgers had trouble entering the zone and maintaining possession once they were inside the offensive zone during the five power plays, as they managed a total of eight shots. Eaves thought the power play performed poorly enough that it even took away some of the Badgers’ momentum by the time the man-advantages expired.

“We definitely did not execute on any our power plays,” defenseman Tim Davision said. “We had limited chances, if any, got a lot of shot blocks. Our breakouts were tough. We couldn’t really establish in-zone offense. It just wasn’t there tonight.”

Wisconsin’s shot total was 31, making it only the fifth time this season the Badgers have eclipsed 30 or more shots on goal. But similar to the other four games with 30 or more shots, the Badgers failed to win, giving them a record of 0-4-1 in those contests. The shutout also marked the fourth time this season Wisconsin has failed to record a goal, and the 11th time this year where the Badgers have been held to one goal or fewer. Last season Wisconsin was limited to one goal or fewer just four times, and in the last three seasons combined it had been shutout a total of three times.

Rumpel masked those offensive woes Friday night with strong play, but there wasn’t much he could do for the Badgers on the three goals Michigan State scored Saturday night, with Eaves saying “he would have had to have pulled a rabbit out of his hat to get some of those.”

The loss may have set Wisconsin back and given the Badgers their 20th loss of the season, but taking both games from a team in the middle of a conference title race is a tall task, according to redshirt sophomore Morgan Zulinick.

“I don’t think we can look at it as a step back,” Zulinick said. “We got to push forward no matter what happened tonight. Sweeping is hard no matter who it is.”