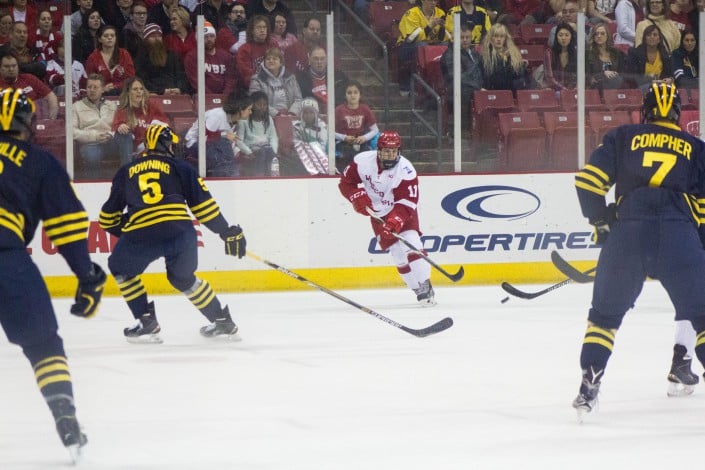 For just the third time this season, the Wisconsin men’s hockey team has a chance to win consecutive games.

After earning their first road victory of the season last Saturday at Ohio State, the Badgers (3-19-4, 1-9-2-2 Big Ten) return to the Kohl Center this weekend to take on Michigan State in their second-to-last home series of the regular season.

The 3-2 win against the Buckeyes helped Wisconsin snap an 11-game winless streak dating back to a 2-0 shutout of Michigan Tech on Jan. 3. But considering UW has won just two other games this season, the situation heading into this weekend is a unique one, according to head coach Mike Eaves

“There is a tendency to, okay, finally got a win on the road, take a breath,” Eaves said. “But at the same time I think we have to be careful and not lose our position and slide back.”

Heading into this weekend with just the one conference win, UW still sits alone in last place with seven points and is pretty much guaranteed a bottom-two league finish. A last place finish has never happened in Wisconsin hockey history, even going back to the start of WCHA play in 1969, and a bottom-two finish has happened only one other time, in 1979-80.

“It’s interesting, you walk in our locker room, there’s the standings right there,” Eaves said. “We’re down here at the bottom, and that’s not a very pleasant thing to look at. We’re not used to that.”

Despite being at the bottom of the conference ladder, Wisconsin still has eight games to play and can make up some ground in the series against the Spartans (12-12-2, 6-4-2-2 Big Ten), who currently sit third with 22 points.

MSU is coming off a series sweep of Penn State at home, which helped propel the Spartans into a tie for third in the Big Ten race with the Nittany Lions. In the inaugural year of Big Ten play, Michigan State struggled much like Wisconsin has this year. The Spartans ended the 2013-14 campaign with just five conference victories and a lone win away from home.

But with eight games still left in the conference slate this year, MSU has already exceeded its win total from a year ago and trails first place Minnesota and Michigan by just two points. Eaves credits a big part of the Spartans’ success this season to a great deal of hard work.

Similar to Wisconsin, Michigan State has not been overly potent offensively this season, averaging just 2.3 goals per game with only six players having score five-plus goals.

But similar to the Badgers, strong goaltending has kept the Spartans in most of their games. Junior Jake Hildebrand has started every game in net for Michigan State, and has a solid 92.4 save percentage along with a 2.27 goals-against average. With the strong play of Hildebrand, the Spartans have held opponents to two goals or fewer in 14 of their 26 total games. MSU has surrendered four or more goals on just six occasions and five goals only three times.

As far as special teams are concerned, both teams’ power play units have converted on about 15 percent of their chances. After scoring power play goals in four of five games a few weeks ago, the Wisconsin man advantage has gone just 1-11 in its last four games. Meanwhile, the Spartans had three games without a power play goal, but scored twice on the man advantage last Saturday night against Penn State.

If the Badgers can do the little things right, such as staying out of the penalty box, they might have a chance at accomplishing the goals Eaves laid out for the remainder of the season.

“Those short-term goals are be 1-0 on Friday, 1-0 on Saturday and play our best hockey in March, because we know if we do that we give ourselves a chance to extend our season when we go to Detroit, and that’s the reality,” Eaves said.

Who: Wisconsin vs. Michigan State

Last series: Swept Penn State at home with 3-0 and 3-2 victories to come into a tie with Nittany Lions for third place in Big Ten standings.