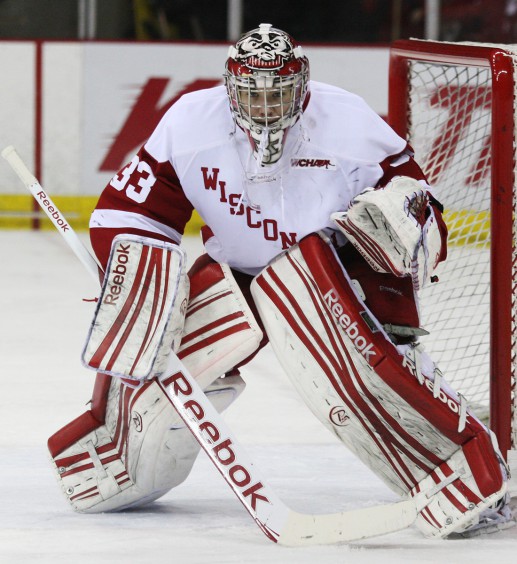 At the Wisconsin men’s hockey game in early January against Boston University, a young fan wore a t-shirt with a slightly altered picture of Jesus and the words “Rumpel Saves” inscribed underneath it.

The picture didn’t quite resemble Jesus. Instead, it had the face of this year’s team and a miracle worker of sorts in between the pipes in senior netminder Joel Rumpel.

Through his first three seasons in goal, the Swift Current, Saskatchewan native had compiled some of the best numbers in Wisconsin’s hockey history. He already had the second-most shutouts for a career with his nine, he was on pace for the second-best goals-against average and he was just five percentage points shy of equaling the record for the highest career save percentage.

But after helping Wisconsin to the Big Ten Tournament Championship and a berth in the NCAA tournament for the second straight year last March, things would change drastically for Rumpel and the Badgers in only a few months’ time.

Nine seniors graduated from last year’s squad, and when two more left early for the NHL, head coach Mike Eaves had an even taller task of trying to replace such a veteran group. He brought in 11 true freshman to try to replace the sheer size of the departing class, but knew that it would take time to get them up to speed in the college game.

With a fairly sizable group of six seniors that included Rumpel and senior captain Chase Drake, though, those remaining pieces from last season believed the transition for the new players could be made fairly quickly.

“We knew it was going to be challenging with that many freshmen coming in, but we thought with our leadership and our past experience, they’d be able to adapt with us, and we’d be able to hit the ground running,” Drake said. “Obviously, that hasn’t been the case.”

Now over four months into the season, Wisconsin still sits on two wins, winless in its last 10 games and just as heavily dependent on Rumpel as it was at the season’s outset.

“With such a young team, we expected him to carry us early through the season,” Drake said. “I think he’s just progressed into carrying us, and maybe we’ve gotten a little bit too comfortable with that. Maybe that’s why it’s still happening.”

Rumpel didn’t actually begin the season as the starting goaltender, as fellow senior Landon Peterson took the reins for the opening game against Alaska-Fairbanks where he made 30 saves on 31 shots in a 1-0 defeat. But since then, Rumpel has all but taken command, starting in every game besides the Nov. 21 matchup at Colorado College.

He acknowledged that he knew at the season’s outset he was being counted on by his teammates and still is, but that isn’t really something that bothered him.

“I felt a little bit of that pressure, but it wasn’t anything that I don’t enjoy or don’t look forward to,” Rumpel said. “I’m still happy with how things are going.”

But things as of late haven’t gone that well for Rumpel and the Badgers, who are currently in the midst of one of their tougher stretches of the season. In the 10-game winless streak, Rumpel has allowed at least four goals seven times, including a career-high seven goals against Michigan on Jan. 23. This season, Rumpel has surrendered four or more goals in 14 games, which is striking considering that had happened only 13 total times in his previous three years combined.

But with the fact that nine of the 12 total true freshmen – which includes the now-departed Keegan Ford and his replacement Jake Bunz – have seen ice time in a game, there have been a lot of moving parts in front of Rumpel.

Those moving parts have led to an increased workload for Rumpel and left him out to dry on numerous occasions. And although his lower statistics and the defense’s gaudy numbers might tell one story, that isn’t the only story to be told.

“Obviously our stats don’t show anything,” Rumpel said. “I feel confident out there. I’m making some saves that I never used to be able to make back in my younger years here, so that’s promising.”

Rumpel entered this year with a career 92.6 save percentage and a GAA of 2.16, but this year has just an 89.5 save percentage and a GAA just south of four at 3.82. But those aren’t the only relevant stats. He’s also had to make an average of almost four more saves a game than he did a season ago, and in his last 14 games that he’s finished, he’s averaged over 37 stops.

“If you look at his stats, they’re not where they were last year, [but] he’s made more saves and tougher saves [this year],” Eaves said. “He didn’t have to make a lot of these saves last year because he had veteran guys in front of him. He’s probably made more tougher saves this year than he has in his first three years.”

This rough stretch for Wisconsin and Rumpel has also included two games where Eaves pulled Rumpel after slow starts. Two games before the winless streak began, Rumpel allowed three goals on the first six shots he saw and then sat on the bench for the rest of the game. Then 22 days later against Michigan, Rumpel allowed two scores in the opening 2:03 and was pulled in favor of Peterson.

But despite being taken out of games, allowing career-highs in goals and making 30 or more saves night in and night out, Rumpel has somehow managed to remain upbeat.

“You’re going through a time like this where we haven’t won in 10 games and the guy, he’s just always positive,” Drake said. “I’ll tell you it’s not fun coming to the rink right now when you’re losing games. But he’s always positive. He’s just resilient.”

Even after some of his toughest performances, Rumpel has taken the personal adversity in stride, according to Drake, who lives with Rumpel.

“He’s so even-keeled that you really can’t notice anything different,” Drake said. “I remember after the Tech game he really didn’t talk. But he was out there. We were watching TV, had dinner and stuff together. Before he goes to bed, it’s the same old Joel. It’s bizarre, but maybe that’s why he’s so successful where he is.”

As tough as this season has been, Wisconsin still has 10 more regular season games remaining and at least one game after that in the Big Ten Tournament.

An NCAA tournament berth is all but impossible, barring three-straight wins at the conference tournament to get an automatic spot, but there’s still a lot of hockey to be played and Rumpel saves to be made.

“It’s been a struggle so far, but you feel every game you’re starting to add a different aspect to your game, and come the end of the season, I’m looking forward to being able to tie that all together,” Rumpel said.