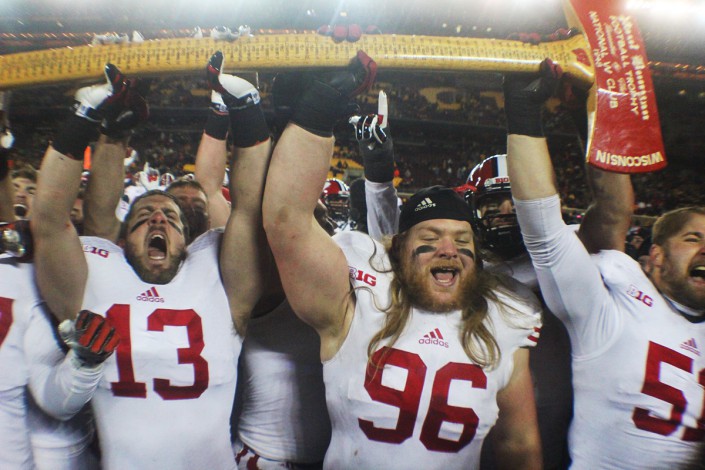 UPDATE: Gary Andersen released a statement clarifying his comments in regards to the post game celebration. It appears as if the trophy will be presented in the winning team’s end zone rather than on the sidelines or in the locker room.

When Wisconsin and Minnesota meet on Saturday for the 124th time, it will not only be for the right to hoist Paul Bunyan’s Axe, but more importantly, for the Big Ten West Division title and a trip to Indianapolis for the Big Ten Championship Game.

But the winner of Saturday’s matchup between No. 14 Wisconsin and No. 22 Minnesota at Camp Randall will have a new wrinkle to their postgame celebrations. Wisconsin head coach Gary Andersen said the Axe will be held in the winning team’s locker room following the game as opposed to on the sidelines and will “disappear” during the game. The winning team will be able to bring the Axe onto the field to celebrate with fans after they receive it in their locker room where they will likely also “chop” down the losing team’s goal post.

This is a result of what occurred in Minnesota last season when a scuffle broke out on the field between the Badgers and Gophers following Wisconsin’s 20-7 defeat of Minnesota.

“No one’s going to protect those kids when they’re on the field because the coaches are gone, the security is gone, there’s nobody out there and all of a sudden we’re asking 200 kids to run around the football field and not put themselves in harm’s way.”

Andersen said Wisconsin athletic director Barry Alvarez is on board with the decision but that he has yet to talk to Kill about it.

But it appears as if Wisconsin running back and Heisman candidate Melvin Gordon doesn’t fully support Andersen’s decision.

I love Melvin Gordon's honesty. He doesn't like not being able to grab the axe after Minnesota game and wants to talk to seniors about it.

However, UW defensive back Michael Caputo has a different thought about the new postgame Axe ceremony.

Michael Caputo: "I didn’t come to Wisconsin to play for an axe and chop down a goal post. I came to play football." Well put. #Badgers

Regardless of where the Axe will be held, Saturday’s game is the biggest for either team and one of the most important games between the two rivals in recent memory.

The Badgers and Gophers will kickoff at 2:30 p.m. Saturday from Camp Randall Stadium.