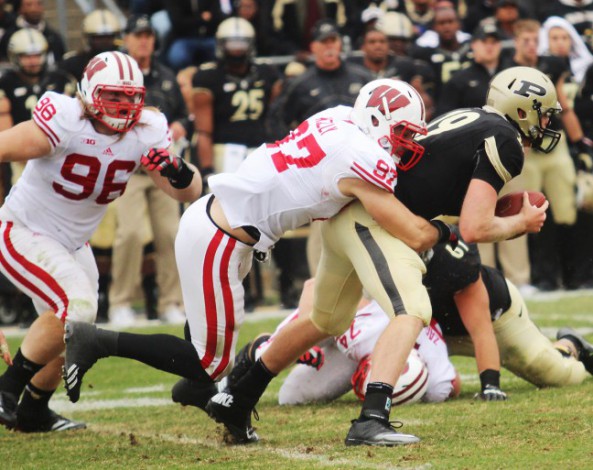 Former Wisconsin football player Brendan Kelly has persevered through challenges his entire career while chasing one goal: playing in the National Football League. After six years with the Badgers — with one redshirt season and another ending with an injury — Kelly has his eyes set on playing at the next level. Untimely injuries have hampered his ability to boost his stock leading up to the draft, but that hasn’t stopped the Minnesota native from pushing forward. Immediately after Wisconsin’s bowl game, Kelly began to prepare himself for professional football. Kelly trained in Waukesha, Wis., with NFL players at the NX Level training facility all while finishing his masters degree in education leadership and policy analysis with an emphasis in athletic administration. With the draft less than a week away, Kelly is about to find out where he will land in the NFL and who will give him a chance to finally reach his dream.

Badger Herald: When did making it into the National Football League become a major focus for you?

Brendan Kelly: I’m the type of kid where I’ve been preparing for the NFL since I was like eight years old. That’s been my dream, that’s been my goal.

BH: You sustained an injury that prevented you from working out at Wisconsin’s pro day. How frustrating was it for you to go through that?

BK: March 1, which would have been four days before my pro day, I got a pulled hamstring. The frustrating part about that is you put in all of the work, all the time getting your weight where you want it, getting your strength where you want it and then you sustain an injury like that. It took a lot of wind out of my sail. I had to kind of re-evaluate and say ‘OK, why’d this happen. How are we going to approach it.’ The good thing is that it took about one day and I got back on my bike, started rehabbing really hard and haven’t looked back since. I’ve been moving forward, getting healthy and feeling good about it.

BH: You played both defensive end in a 4-3 scheme and outside linebacker in the 3-4. Which do you think you are most comfortable with or would have the most success playing at the next level?

BK: I think I can play both positions. I’m not going to pigeonhole myself and say I’m only a 4-3 end or a 3-4 outside linebacker. I think I can play both. There’s going to be difference in both. I’m going to have strengths and weaknesses in both. But at the same time I know I can make both of them work. I did it in college and there’s no reason why I can’t at the next level. I just have to pick up that level of competition that much more.

BH: What is the biggest difference that you have noticed between training for college football and training for professional football?

BK: The level of intensity, it gets ramped up. Obviously in college, you train with all of your college buddies, but I went to the gym everyday with dudes that were in the NFL. So, I saw that as a motivation because I’m not on the same level as the guys I’m training with. I’m training with J.J. Watt, DeAndre Levy, Bradie Ewing with Jacksonville, [ Fla.,] — all of these different guys that I had played with formerly, but they had made the next step. So, I had looked at it as a challenge to say ‘what are they doing to get to the next level and stay at the next level? And what do I need to do in my training, in my game, in my character to get there?’ It was great to have the competition level. Obviously you can never mimic football. You can train for it all you want, but at the end of the day you can’t train exactly for the game of football because it is so unique. We’ve tried to mimic that as best we can.

BH: What is the one thing that guys like Watt or Ewing tell you that you need to know in order to be successful in the NFL?

BK: I don’t know if it was so much of what they said, but it was more about what they did. I think actions speak louder than words and seeing them show up to the gym everyday, twice a day. They’re not training for a combine; they’re not training for a pro day. These guys realize with the level of competition that they have to keep stepping it up because if someone out there is training once a day, they are going to train twice a day. And that’s their attitude. If someone is training twice a day, they are going to train three times a day. It just shows at this level of competition that these guys are so driven. These guys work so hard and that’s what it takes. It takes working harder than you think you can work and you have to do it day in and day out. A lot of people don’t recognize the work these guys put in outside that is just remarkable. The amount of dedication that they put into their bodies, into their focus and training is something that it takes to be a professional.

BH: What are coaches and scouts telling you during this process leading up to the draft?

BK: There’s a big difference between scouts and coaches, so you always kind of have to take what scouts say with a grain of salt. For instance, you hear stuff from scouts all the time like ‘lacks toughness’ or something like that and you say ‘Hold up. Does this scout know what I overcame to play on the field.’ So you have to kind of take it with a grain of salt because he doesn’t know you and you don’t know him.

I know what I need to improve on in my game. Number one, staying injury free is going to be huge for me. Going into the NFL with a healthy body, going through camp and sustaining a healthy body and being able to practice in every practice and play in every game. That’s going to be the number one thing for me. Also, putting on size. If a team wants me to play defensive end in a 4-3 scheme, there’s no more of being 255 like I was in college. I’m around 265 right now and I hope, as my body continues to mature and as I finish up school and I don’t have as many other demands in my life, that I can really focus on getting up to that 275-range that I think I’ll be most comfortable playing at. I’ve been addressing those issues the best I can and just taking it one day at a time.

BH: Have you had any private workouts with NFL teams?

BK: My hamstring happened at probably one of the worst times it could have happened, due to the fact that it was so close to my pro day. The closer you get to your pro day means you are that much closer to the draft. So, we went ahead and just didn’t schedule any other workouts due to the fact that the worst thing I could have done was go out and repull it and now I’m hurt going into the draft. At least now I am on the up-swing in recovery. We can show teams that he’s not going to work out but he’ll be ready come OTAs.

BH: Where are you at with your hamstring injury right now?

BK: As a football player, you never say that you are 100 percent because you cannot mimic what it takes to take on a 200- to 300-pound offensive lineman and splitting a double team. You can’t mimic that in your rehab. How close am I to 100 percent? I think I’m pretty close, but we’re going to see. I think I’m getting healthier every single day and I feel good about where I’m at.

BH: What is the sense that you are getting from your agent or teams about where you will go in the draft?

BK: A lot of teams are saying, late round to free agent type guy. They tell me my knocks and my strengths. I’m just looking for an opportunity to play football. I love this game. It doesn’t matter so much where I go or who I go to, I want an opportunity to play the game that I love and that’s all I can ask for.

BH: Are there any specific teams that have shown significant interest in you?

BH: If you get drafted in a late round or don’t get drafted at all, will that give you extra motivation to prove that you belong in the league?

BK: Yeah, 100 percent. It’s the same thing that goes on in high school. When you see guys with one star off of Rivals and another kid gets five stars. That one star, he doesn’t tell anyone, but that is a chip on his shoulder. That’s kind of like the whole getting drafted, not getting drafted or going late. In my case, am I going to be a little bit salty because there is a team that passed me up? No, not by any means, I understand that this is a business, but I’m going to be grateful for the opportunity that I get. At the end of the day, if you worry about what should have happened, you are wasting time affecting what is happening in front of you. I don’t like to look backwards; I like to look forward to the next goal. You keep doing that and you’ll be surprised where you get.

BH: It sounds like you have had a trying time chasing your dream of playing in the NFL with your injury and missing the pro day. Has there been anyone in particular that has helped keep you on track?

BK: Obviously my family — my mom and dad and brother and sister — but also Bradie Ewing. I became really good friends with him in college. He went on to play for the Falcons. He went through something similar that I was going through. He was released from the Falcons and then got picked up by Jacksonville and we were living together. He’s helped me through some times. We’ve had some conversations that have really helped and vise versa. I just think about building that comradery with your friends and future teammate or guy that you are playing against. That’s just stuff that lasts forever so you have to give credit to guys like that and obviously my family.

BH: There are several players from Wisconsin that are looking to be drafted this week. Do you keep in touch with those guys and will you be looking to see if and when they get drafted?

BK: Definitely. Those guys that I played with, I’m going to have to relationships for life. I think of those guys so highly because I played with them. I know what they are made up of, both on the inside and what they put on the field. They are great character guys and I think the University of Wisconsin does a fantastic job of not just creating an athlete, but creating a student, creating a man that is going to come out and do a lot for society.