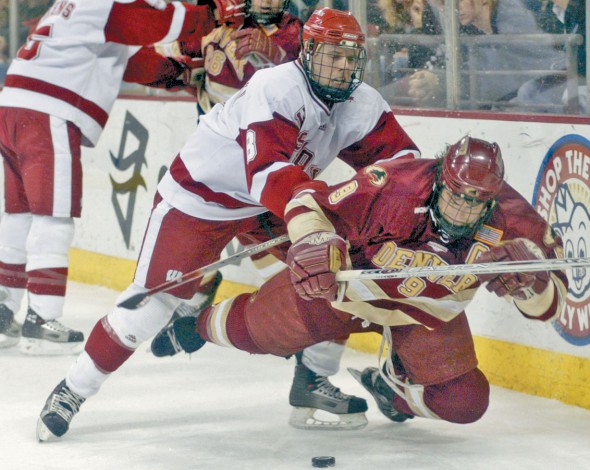 Around this time of year, as the playoffs begin for the NBA and NHL, the age-old debate of which postseason is more exciting starts anew. Although the NBA may be the more popular sport in the United States, 10 reasons exist why the Stanley Cup playoffs are more exciting, even though the last thing most people in Wisconsin want to think about is more ice.

Every one of those reasons is a former Wisconsin hockey player.

It’s widely accepted that the Badger hockey program is one of the best and most historic in all of college hockey. But it’s also no secret that the influence of the program extends far beyond the Kohl Center and the Wisconsin team playing inside of the arena during each respective year. Before the playoffs even started, this season was one of the best for the wide-reaching influence of UW in the pro league. The NHL regular season saw 21 former Badger players suit up in an NHL uniform, second only to the alumni of Boston College.

Meanwhile back on the home front, Wisconsin went and won the inaugural Big Ten hockey tournament in St. Paul, Minn. and earned a bid in the NCAA tournament for the second consecutive year. Despite falling short in the first round of the tournament, there was a silver lining for the Badgers in the season’s end as Jake McCabe and Michael Mersch went on to be named first and second team All-Americans, the 38th and 39th Wisconsin players to earn the achievement.

But arguably even more impressive than the All-American honors for McCabe and Mersch was that six players at the season’s end went on to sign some KIND of professional contract. McCabe headed up the signees when he inked a three-year entry-level deal with the Buffalo Sabres and then went on to play seven games at the end of the NHL season while recording an assist.

In a nutshell McCabe represents the premier level that the Wisconsin hockey program finds itself on. After playing his last game in Cardinal and White March 28, McCabe was at the Scottrade Center in St. Louis playing in an NHL game six days later. There were only nine other players who played in both the NCAA and the NHL this season, and the notion that McCabe was only one of a select few to play in both leagues in one season goes to show what kind of talent the Wisconsin program houses year in and year out.

But unlike many programs, the elite talent wasn’t just limited to one player in McCabe, as Mersch and three other seniors – defensemen Frankie Simonelli, Joe Faust and forward Tyler Barnes – all signed professional contracts and have seen time already with AHL squads. Unfortunately for UW head coach Mike Eaves, sophomore Nic Kerdiles also chose to forgo his final two seasons of eligibility to sign an entry-level deal with the Anaheim Ducks.

The loss of two players with eligibility gave Kerdiles and McCabe a bittersweet moment. With two key cogs now gone, Wisconsin has its work cut out for next season.

“I think it just goes to show how well they develop their players here [at Wisconsin],” Faust said in early April after McCabe’s departure. “That starts with the coaching staff and it carries on to our strength coach Jim Schneider. With the teams that we have and the amount of skilled guys, that helps as well. You get to play on good teams and that just goes to show that we are one of the premier programs.”

McCabe may be the only one of the six Badgers to be signed this year that played in the NHL, but Wisconsin has a strong history of players making it, and making it big in the NHL. Look no further than this year’s Stanley Cup Playoffs.

Sure, Devin Harris has made his mark in the NBA as a former Badger, and Greg Stiemsma has played sparingly on three different NBA teams the last three seasons, but neither have really made lasting impressions or done a great amount in playoff time.

If you look at the NHL, Wisconsin has not only a wide swath of players in the league right now with varying levels of talent, but UW also has some former players who are critical to their teams. Take for example Joe Pavelski, a Wisconsin-born kid from Plover who, like Kerdiles, spent only two seasons in Madison. Now in his eighth NHL season, Pavelski has left little doubt that his decision to leave early was the right one. During the regular season Pavelski became only the second Badger in history to tally 40 or more goals in a season in the NHL. The other one to do that is Dany Heatley who accomplished the feat twice. The 40-goal mark might not mean much to the layman, but to put it in perspective, Pavelski had more goals than NHL superstars Sidney Crosby and Phil Kessel. Pavelski’s 79 regular season points tied him for ninth in the league with Alex Ovechkin. Pavelski has star power.

But there are others, too. Ryan Suter of the Minnesota Wild, is widely considered one of the best defenseman in the league and logged the most average ice time per game in the NHL by almost two minutes a game. Then you have Rene Bourque, who has three goals in four postseason games so far but Badger fans and NHL goalies might forget about. He only had nine during the regular season. There’s also Derek Stepan, who could possibly be the next captain of the New York Rangers and has contributed two goals and an assist so far during the playoffs.

Wherever you look in the NHL this postseason, it seems like you see a former Badger, and that actually has a great deal of truth to it. Of the eight first round series, seven have former Wisconsin players in them. So although Wisconsin didn’t win the National Championship this year, it still has a good chance to win a championship of sorts in hockey this year. It’ll just be the Stanley Cup.