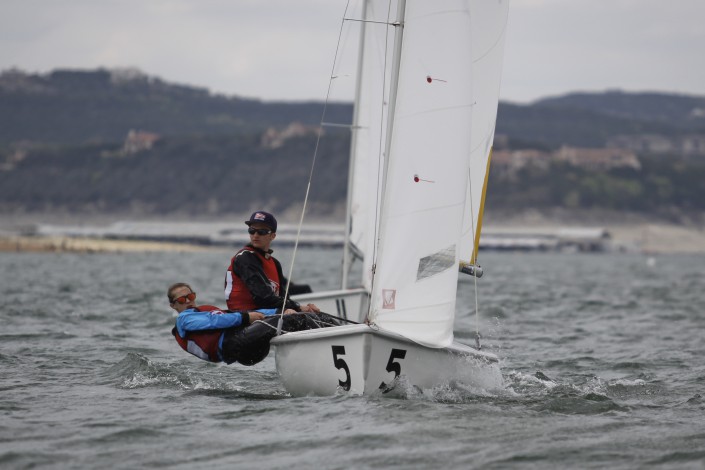 As you soak in a warm spring afternoon from an orange chair on the Memorial Union terrace, a thatch of white sails move slowly across the dark azure horizon of Lake Mendota like the clouds that drift lazily in the lighter blue sky above you. But besides signs of a long winter finally broken along with the ice, these sails are much more than a welcome sign of summer — underneath those sails are the faces and stories of the Wisconsin Sailing team.

But this is hardly an ordinary group of 55 sailors, the number of Wisconsin students claiming spots on the roster of the sailing team. Although that number is closer to 40 in terms of consistently active members, together they make up the biggest team in college sailing.

Part of the reason behind that, though, is Wisconsin is not like many college sailing teams, at least not like those teams on the east coast where sailing, squash and fencing are just as much a part of the athletic cultures of the universities as football and basketball.

At eastern universities like Harvard, where there are 45 student-athletes between the men’s and women’s teams, sailing is a varsity endeavor and rosters are capped at a specific number of athletes.

But on any given weekend during the spring, while Lake Mendota still is enclosed by several feet of ice, Wisconsin travels east and races right alongside those varsity programs, which is quite the serious endeavor compared to racing in the Midwest.

“Even the culture at the events [out east] is different,”  junior co-captain Whitney Kent, said. “In our conference everybody is friends. Out there, you might have known someone your whole life, but you barely even talk to them. So it’s a more intense atmosphere.”

With an unpredictable lake like Mendota and erratic Wisconsin weather, much of the spring season for the UW sailing team takes place far away from the confines of the Madison campus. But unlike the other teams in the Midwest, Wisconsin doesn’t let the conditions at home prevent them from getting out on the water. Starting in the second weekend of February, UW travels to at least one race a weekend, if not more, sending anywhere from six sailors to the 37 that took part in this year’s spring break trip.

Facing off against elite level talent on the east coast might be nerve-racking coming from a school like Wisconsin where the sport is only at club level, but after racing against them nearly every weekend, it’s a boat (literally speaking) sailors like UW senior Michael Lee, a co-captain of the team, have been in numerous times over their careers.

“Going into your first regatta as a freshman, it’s kind of intimidating,” Lee said. “But once you get on the water you realize you can actually stay with them a little bit, it’s not that bad.”

Besides a few other Midwestern schools in Wisconsin’s conference like Michigan and Minnesota, which travel east once or maybe twice a spring, UW prides itself on making it out east upwards of five times each spring. This gives Wisconsin’s sailors a frequent taste of top-of-the-line college racing, which other club programs don’t often get the opportunity to experience.

Even getting to the events out east is a hard enough endeavor, as the team is almost completely self-funded except for a tenth of the budget provided by the Hoofers program. But with fundraising and a strong alumni base, Wisconsin not only makes it a habit of showing up to the premier events, but of succeeding in them.

This weekend in the Coed Fleet Racing Qualifiers, which were supposed to be held in Madison but had to be moved to Chicago due to the slow thaw of Lake Mendota, Wisconsin took second place and for the sixth-straight year advanced to Nationals. Although sophomore crew Katie Hall said she was disappointed with the second place finish to Big Ten rival Michigan, it gives you a sense of what the expectations are like surrounding the program — even qualifying for Nationals is not enough.

Not Just a Hobby

As a mere onlooker at the terrace watching boats move slowly around the lake, it might seem like sailing is just a hobby, but that’s hardly the case. This past weekend’s qualifier went into a sail-off with Michigan, the equivalent of overtime for sailing. And a sailing weekend isn’t just a stroll around a body of water enjoying the sun and cool breeze. During a team race weekend, each team sends three boats composed of two sailors each. Over the course of the weekend the three boats will compete against other schools in three-on-three races. In a team race competition weekend there are as many as 160 races total while each individual team competes in around 20 races, making it an arduous weekend for the sailors involved.

With the multitude of races and how much and how sporadically the weather can change, each race is an entirely new experience, something that drew Lee to the sport.

“I grew up playing basketball as well and so every single time you step on a basketball court everything is exactly the same but every time you step into a boat there’s something new, something different and challenging to try and figure out about the race course, the venue — whatever it might be,” Lee said. “From a competitive aspect, it’s always changing and you always have to adapt.”

Taking into mind how different the conditions can be, whether completely still as in the eye of a storm or hectic enough to be in the midst of the worst of the storm, a sailor’s abilities have to be quite unique as Lee described.

“It’s having the strength of a football player but the grace of a ballerina.”

Although sailing requires both strength and agility, it also requires different mindsets for the two people on the boat, the skipper and the crew. Most of the public’s experience with sailing revolves around the higher level of sailing where the boats are much bigger and so are the crews. But at the college level the boats aren’t exactly the roomiest and there is only enough room for the skipper and the crew, underlining the importance of the relationship between the two parties.

While the skipper is in charge of driving the boat, with concentrations outside of the vessel, the crew has his or her focus on the inside, making sure all the equipment is maintained.

These differing roles make the lives of those inside the boat much different come race time, and although the skippers on Wisconsin may have enjoyed this past weekend of team racing more, the Wisconsin crew members, like Hall, who have a tendency to like fleet racing more, will have their time in the sun this coming weekend.

“Team racing can be a little intimidating for crews just because there can be a lot of yelling, a lot of close quartered maneuvering. It’s a lot more tactical and a lot more rules-based and trying to use strategy to outsmart the other team, whereas fleet racing is a combination of that and going fast,” Kent said.

Wisconsin will head to the coed and women’s qualifiers this coming weekend and, with their finish this past weekend, UW has the chance to be the only club team to send all three teams to Nationals for the second year in a row.

Next time you see those sails on the water, you’ll know the boats on the water don’t just represent a hobby but the passion and lifeblood of one of the more successful teams, not just on campus, but in the country.

“College sailing is one unique aspect that you can only do for four years. It’s a lifelong thing,” Kent said. “You can sail until you can’t walk anymore and you can sail after that. It’s a sport and it’s a hobby. You can take your kids and your grandparents out and your friends. They don’t have to know how to sail to go out and have a good time.”